Al-Saffar is reported to have compiled several hadith works. The famous book Basa'ir al-darajat, a hadith collection on the theme of Imamology, is attributed to him.

Al-Saffar, also known as al-A'raj (the Lame), was one of the Iranian mawlas (servent) of 'Isa b. Musa b. Talha al-Ash'ari[1] hence, his epithet al-Ash'ari.

According to al-Shaykh al-Tusi, he was a companion of Imam al-Hasan al-'Askari (a). The main evidence for this claim is the correspondences between him and the Imam (a),[3] which can further indicate that, in addition to being a companion, he was a representative of the Imam (a).

Al-Saffar was one of the most prominent hadith scholars of Qom. The scholars of rijal have mentioned him as a reliable and great scholar.[4]

He was also a prominent jurist of his time. One of his jurisprudential opinions which is reported in the sources is the permissibility of saying Farsi prayers in qunut. 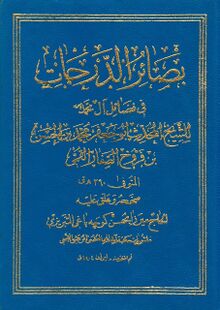 His other works, as recorded by al-Najashi, are the following:[5]

As the titles of his works indicate, he was more concerned with jurisprudence, though some of his works had theological themes.

Moreover, he had a collection of questions from Imam al-Hasan al-'Askari (a) and the Imam's (a) answers, which was extant at least until the time of al-Shaykh al-Saduq.

Apart from Imam al-Hasan al-'Askari (a), al-Saffar quoted hadiths from prominent hadith transmitters, such as:[6]

And the following hadith transmitters quoted hadiths from him:[7]