Qunūt (Arabic: قنوت) is a recommended action in prayers. In qunut, the person should raise his hands and pray. It is recommended that the person raises his hands up to his face, facing the palms toward skies. In most prayers, qunut is performed once in the second rak'a after recitation of the Qur'an 1 and another sura, before ruku'.

In qunut, any dhikr or supplication can be recited. There is a disagreement among fiqh scholars about reciting non-Arabic dhikr in qunut; but, all of them believe that it does not make the prayer invalid. When performing qunut, some actions such as saying takbir before going to ruku', audible recitation of the dhikr in qunut and reciting some verses of the Qur'an such as verse 201 of the Qur'an 2 are recommended. Sunni Muslims disagree about the permissibility of qunut. Some Sunnis consider it an impermissible innovation (bid'a) and others, only view it as permissible in fajr prayer. 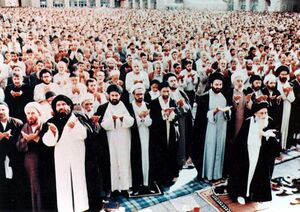 A photo of qunut in congregational prayer

Literally, "qunut" means "obeying with humility".[1] In the Qur'an, the word "qunut" and its derivations have been mentioned 13 times with the meanings of supplication, worship, prayer and obedience. In fiqh, reciting supplication in a certain manner after reciting Sura al-Fatiha and another sura in obligatory and recommended prayers is called qunut.[2]

Differences in Qunut of Different Prayers

Except for the prayers of Eid al-Fitr and Eid al-Adha, Friday prayer, Ayat prayer and Watr prayer, in all other prayers, qunut is performed only once in the second rak'a after recitation of Sura al-Fatiha and another sura, before ruku'. In the prayers of Eid al-Fitr and Eid al-Adha, qunut is performed five times in the first rak'a and four times in the second rak'a. There are five qunuts in Ayat prayer, two qunuts in Friday prayer, one of which is before ruku' of the first rak'a and the other is after ruku' of the second rak'a; and in Watr prayer, qunut is after reciting Sura al-Fatiha and the other sura of the first rak'a.[6]

Reciting Qunut in a Language other than Arabic

Turning the Ring in Qunut and Forgetting Qunut

Some people turn the stone of their ring inside the palm for qunut. According to rulings of marja's, it bears no rewards and there are no hadiths about the recommendation of this action; however, it does not make the prayer invalid.

In some fiqh references, it is mentioned that if a person forgets qunut and remembers it in ruku' or after it before prostration, he can perform qunut.

Reciting some verses of the Qur'an and dhikrs is common in qunut, some of which are as follows:

In books of hadith and fiqh, reciting some verses of the Qur'an and dhikrs has been recommended, some of which are as follows:

Permissibility of Performing Qunut in the Views of Sunnis

Sunni muslims disagree about the permissibility of qunut. Hanafis and Hanbalis consider it an impermissible innovation in prayers other than Watr prayer; but, Shafi'is and Malikis consider it recommended both in Watr and Fajr prayers.