Al-Sajda (Arabic: السجدة) or al-Sujūd (Arabic: السجود) is prostration before God. It is a particular worship, or part thereof, consisting of touching the ground with one's forehead as a sign of one's humbleness toward God. In the Islamic culture it counts as one of the most virtuous worships. It is obligatory for Muslims to prostrate before God twice in each rak'a of their everyday prayers. A group of Muslims performing sajda in congregational prayer.

Sujud as a Worship

The word "sujud" literally means to be humble or to bow,[1] and in Islam, it refers to touching the ground with one's forehead (together with six other parts of the body).[2]

Sujud has been important as a symbol of humbleness towards God. In addition to many hadiths, there are 92 verses of the Qur'an mentioning sajda. Among Qur'anic suras, Qur'an 32 is called "Sura al-Sajda". There is a verse in this sura about people who prostrate when they hear Qur'anic verses.[3] According to some hadiths, sajda is the best position for a person to be close to God.

Sajda is not restricted to human beings. All creatures and objects worship God by performing sajda.[4]

Sometimes sajda is performed as an independent worship and sometimes as a part of the prayer, sajda al-sahw,[5] Qur'anic sajdas,[6] and many dhikrs and other worships.

Sajda in the Prayer

All obligatory and recommended prayers involve two sajdas in each rak'a after ruku'. These two sajdas are essential parts of the prayer without which it is invalidated. After ruku', the worshipper should sit down and touch the ground with seven parts of his or her body (forehead, the two palms, the two knees, and the tops of the two big toes) while the body is fixed. After this, the worshiper should sit up and when the body is fixed, they should touch the ground with the seven parts again and mention the required sayings. After that, they should sit up again and continue the rest of the prayer.[7]

The particular saying that should be mentioned once during the sajda is "subḥān-a rabbī-a l-aʿlā wa bi hamdih" (سُبْحانَ رَبِّی الاَعْلیٰ وَ بِحَمْدِهِ, Glory be to my Great Sustainer, Most High, and I praise Him). One can also mention "subḥān Allah" (سُبْحانَ اللّهِ, Glory be to Allah) or any other dhikr of the same length three times.[8]

The following actions are recommended during the sajda:[9] 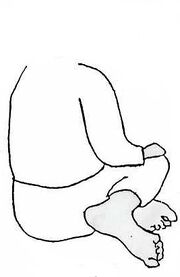 The condition of sitting by tawarruk.

If one forgets some parts of obligatory prayers or does things such as unintentional talking during the prayer, providing that the part is not among essentials, then they are required to perform sajda of sahw (forgetfulness) immediately after the prayer.

Obligatory Sajda of the Qur'an

Sajda al-Shukr or Sajda of Thankfulness is a recommended kind of sajda that is performed in the following cases:

In order to perform Sajda al-Shukr, one is not required to be directed to the qibla or to have tahara (such as wudu', ghusl, or tayammum).

Conditions of the Place of Sajda

According to hadiths and the tradition of the Prophet (s), the thing one touches with his or her forehead during the sajda should be clean[11] and it should be from the earth or what grows from the earth[12] (as long as it is not edible or wearable), such as soil, stone, sand, ballast, and wood.

Sunni Muslims take it valid to perform the sajda on rugs, carpets, and whatever that is not najis (unclean).[15] Wahhabis condemn Shi'a performing sajda on turba or Muhr as being polytheistic, worshiping the grave, consecration, or heretic. They warn Shiites who perform sajda on turba in al-Masjid al-Haram and al-Masjid al-Nabi (s).

According to hadiths, the most virtuous thing to perform sajda on is Imam al-Husayn (a)'s Turba which illuminates the seven earths and removes seven covers.[16] Shiite Imams (a) performed sajda on this soil. There is a hadith quoted by al-Sayyid al-Himyari from Imam al-Mahdi (a) concerning the virtues of performing sajda on Imam al-Husayn (a)'s soil.

Sajda for the Infallibles (a)