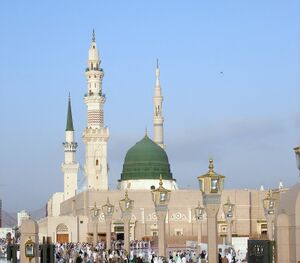 Ziyāra (Arabic: الزيارة; visit) or pilgrimage is a religious act which means to attend before religious leaders or their graves in order to express and show love and reverence and acquire spiritual blessings. Visiting religious personalities and their graves have always been among recommended acts in Islam and during history, Muslims have paid attention to it and followed it. However, ziyara of the Prophet (s) and Imams (a) has had a great importance among Shi'a and many spiritual benefits and rewards have been mentioned for them. Since ziyara is greatly important in Shi'a culture, it has been regarded among the characteristics of Shi'a.

Despite the general opinion of Muslims about recommendation and permissibility of Ziyara, Wahhabism, which has certain interpretations of some verses, claims that ziyara is not compatible with the conduct of the Prophet (s) and has cast doubts on this issue. These doubts have made Shi'a and Sunni scholars answer and defend the permissibility of Ziyara.

Literally, the word "Ziyara" means turning and withdrawing from something. The person who goes on ziyara is called Za'ir because when he goes to ziyara of a person, turns away from others.[1]

The common meaning of ziyara is that one turns to a person to show respect and become close to him; i.e. a visit which is accompanied with reverence at the heart and spiritual approach. Also, some have said that visiting friends of God and great Muslim personalities is called ziyara because it is turning away from material world towards the spiritual world.

In Islamic culture and all Muslims' tradition, ziyara has an important position which can be understood from hadiths received from Imams (a) about the promised rewards for ziyara. Hadiths about recommendation of ziyara of the Prophet (s) are many and at the level of Tawatur [high frequency of narration] and agreed upon by both Shi'as and Sunnis. Therefore, Muslims go to ziyara of the grave of the Prophet (s) since long ago.

In Shi'a culture, ziyara means the connection with the infallible Imam (a) and admitting his Wilaya, ziyara has a tight relation with the issue of the love of the Ahl al-Bayt (a), Tawalli [Loving] and Tabarri [disassociation]. Ziyara of the Infallible (a) is among the signs and requirements of loyalty towards them and doing justice to their rights of Wilaya over their followers; since, in the view of Shi'a, the Prophet (s) and Imams (a) have Wilaya and even after they pass away, their positions are preserved.

One of the fruits of Imam's Wilaya is his control over the hearts, meaning that Imam has control over souls and hearts of people. In most ziyara texts, such a Wilaya and Imama is admitted; for example, it is mentioned in texts for ziyara of Imams (a), "I attest that you see my place and hear my word and answer my salutation." In Shi'a view, the soul of Imam becomes aware about his visitor with God's permission and this has made ziyara for Shi'a a meeting filled with love and spirituality, the influence of which can obviously be seen in Shi'a prose and poetry. Ziyarah and the holy shrines of the Ahl al-Bayt (a) have had great roles in Shi'a history and paying great attention to these is considered among significant cultural symbols of Shi'a.

Many hadiths and historical reports can be found in Sunni sources about ziyara of sahaba which indicate that ziyara is accepted and recommended among Sunni Muslims. In numerous books such as Sahih Muslim and Sunan Abi Dawud, it has been narrated from the Holy Prophet (s) that:"In the past, I forbade you from ziyara of the graves, but make ziyara of them now (because it will remind you of the hereafter and their ziyara will add to your good so anyone who wants to make ziyara then it is allowed but do not utter useless and false statements).[2]

Different types of ziyara have been mentioned in hadiths from the Ahl al-Bayt (a); some of which are:

Also about ziyara of Lady Fatima al-Zahra (a), whose grave is unknown, her ziyara can be done from distance.[9]

The heart of ziyara is the spiritual attention towards Imam and showing respect, greetings, and making a spiritual bond with him. However, since Ziyara is considered as going before Imam (a), certain instructions are given for it, following which increases the benefits one can receive from Ziyara. Certain instructions are given for the ziyarah of some Imams (a) such as the Prophet (s) or Imam al-Husayn (a). For example, there are certain Du'as and manners recommended to be observed during the ziyara of the Prophet (s), and ziyara of Imam al-Husayn (a) on the day of 'Arafa will have more rewards; or ziyara of Imam al-Rida (a) in the months of Dhu l-Qa'da and Rajab has been recommended.

Some common manners of ziyara are:[16]

There are different types of Ziyara, each of which has unique benefits. For example, ziyara of Ka'ba has certain philosophy and certain manners of performance which are mentioned in the references of du'a and ziyara in detail.[19]

Ziyara of the faithful and their graves is a mutual relationship that has benefits and fruits both for the visitor and the visited. In addition to abundant rewards for visiting the faithful, it is mentioned in many hadiths that the one is buried in the grave senses the presence of his visitor and becomes happy with their presence.[20] Other benefits for the ziyara of the graves of the faithful include being reminded about death, taking lessons, and being prepared for a correction.[21]

Merits of the ziyara of Infallible Imams (a)

The Prophet (s) and Pure Imams (a) are perfect people and most beloved servants of God who are closest to God and at the peak of Taqwa (God-wariness) and God has kept them immaculate from any sins and errors. To love the Ahl al-Bayt (a) is God's order and showing enmity with them is actually showing enmity with God.[22] Reaching high levels of closeness to God without loving the Ahl al-Bayt (a) and accepting their Wilaya is not possible.

Accordingly, the merits of ziyara can be understood, since ziyara is among the best ways to connect to the infallible leaders which brings about great opportunities and spirituality. Also, respecting Imams (a) strengthens the spiritual connection between the visitor and Imam (a) and in fact makes their spiritual path continue.

Forgiveness of the sins, benefitting from intercession of Imams (a) and fulfillment of requests are among other spiritual fruits, ziyara of Imams (a) bring about.

To give examples, some hadiths about the merits of ziyara are mentioned below:

In addition to rewards mentioned for visitors of Imams (a) in hadiths, the culture of ziyara has several social and educational functions such as the benefits mentioned below: In the course of the Iranian Constitutional Revolution, some of Shi'a scholars held a sit-in at the Shrine of 'Abd al-'Azim al-Hasani

Since the beginning of their history and in most ages, Shi'a has been a minority opposite to the government and hated by different political powers; therefore, political and social issues have been blended with the souls and beliefs of Shi'a.

During the history of Shi'a, respected shrines of infallible Imams (a) have been centers for knowledge and preaching religion, origins of revolutions and uprisings, places to make covenants for revolutions and social movements, etc. Largest Shi'a seminaries have been developed in Najaf, Qom and Mashhad.

According to political and social problems, some major roles can be mentioned for ziyara in brief:

Besides giving certain instructions for the ziyara, also some texts were taught in Shi'a tradition and hadiths to be recited during the ziyara of Imam's tombs. Ziyara-texts received from the Ahl al-Bayt (a) mostly have content-rich with authentic Islamic beliefs and teachings. Some of such ziyara-texts have found more importance and fame due to their special content or reference; such as Ziyara Ashura', al-Jami'a al-Kabira, Ziyara Amin Allah, Ziyara Warith and Ziyara Al Yasin.

In contemporary time, Wahhabis have made literalistic interpretations of the verses of the Qur'an and have questioned ziyara of the graves. These questions have been answered in different books of Shi'a and Sunni scholars.