Mafātīḥ al-jinān (Arabic: مفاتیح الجنان), (keys to the heavens) by Shaykh Abbas Qummi is the most popular book of supplication in the Shi'a world. It contains du'as, supplications, Ziyara texts, practices specific to certain days, months, and occasions, religious practices and manners, as well as some anecdotes narrated from the Prophet (s), Imams (a), and Islamic scholars.

Mafatih al-jinan was very well received soon after it was published. Nowadays, it can be found in almost all houses, mosques, and Islamic centers.

The compiler has included his al-Baqiyat al-salihat to Mafatih al-jinan which has been published in the margin of various editions.

Also, two books of Mafatih-i nuwin and Mafatih al-hayat have been published. The former aims to improve the authenticity of Mafatih al-jinan and the latter to complete it. 'Abbas b. Muhammad Rida al-Qummi (b. 1294/1877-8 - d. 1359/1941), known as Shaykh Abbas Qummi and Muhaddith Qummi, was a Shiite scholar of the fourteenth/twentieth century. He was well-known in hadiths and history as well as preaching and orations. Shaykh Abbas Qummi wrote many books, the best-known of which are Mafatih al-jinan, Safinat al-bihar, and Muntaha al-amal. He died in Najaf in Dhu l-Hijja 22, 1359/January 21, 1941 and was buried in the Holy Shrine of Imam Ali (a).[1] His son has quoted that his father wrote this book while he has wudu.[2]

Nevertheless, he has not mentioned the chain of transmitters and only indicated the source from which the du'as have been quoted.[4]

Also, some du'as included in this book, such as 'Adila, have not been quoted from the Infallibles, but rather from Islamic scholars.[5]

Second chapter: Practices of the Year

Some information regarding the manners of travel, rituals of ziyara, and also [the text of] asking permission for entering holy shrines have been mentioned at the beginning of this chapter.

In addition to the ziyaras of the twelve Imams (a), this chapter contains ziyaras of the offspring of Imams (a), some Shi'a scholars and noble people such as Hamza, Muslim b. 'Aqil, Fatima bt. Asad, martyrs of the Battle of Uhud, Salman al-Farsi, etc. The recommended practices for some famous mosques, such as Masjid al-Kufa and Mosque of Sa'sa'a b. Sawhan, have also been explained in this chapter.

In the second edition of Mafatih al-jinan, Shaykh Abbas Qummi attached a section named Mulhaqat to the book.[6] In this part, eight new pieces of content have been attached to the book, that the author believed was a necessity for the readers:

Al-Baqiyat al-salihat is a book Shaykh 'Abbas Qummi has written and published on the margins of Mafatih al-jinan.[9] The book comprises of six chapters and an addendum. The chapters are as follows:

It concludes with a brief explanation regarding the rules of burial rites and funeral procedures. Presently, Mafatih al-jinan is being published by a multitude of publishers in various forms, and it seems almost impossible to state the number of all the published editions.

Since the Mafatih al-jinan in full form is a large book, and it is not easy to be carried, many publishers have frequently published selections of it.

This book has been copied by some great calligraphers such as Tahir Khushnivis, Misbahzada, Mirza Ahmad Zanjani Katib, etc. in Naskh and Nasta'liq (two calligraphic styles). Tahir Khushniwis has written this book in neat calligraphy five times.

There are several ways to access Mafatih al-jinan published online on various websites.

Since Mafatih al-jinan is sometimes needed in various situations, for example, whilst traveling, developers have designed various apps for devices, including cellphones and tablets. Mafatih al-jinan has been translated into many languages including Farsi, English, French, Turkish, Urdu, Spanish, and Bahasa Indonesia.

Mafatih al-jinan has been translated to English at least four times, but only the translation by Badr Shahin is a complete translation and has been published by Ansariyan Publications. Mafatih-i nuwin, which is actually the modified version of Mafatih al-jinan, has been collected and published by Ayatollah Makarim Shirazi, one of the Shi'a marja's. Sayyid Hashim Rasuli Mahallati translated this book.

Ayatollah Makarim's goal, as he mentioned in the preface of the book, has been to make the book well-suited to the current time and remove some content over which there have been disagreements.[11] 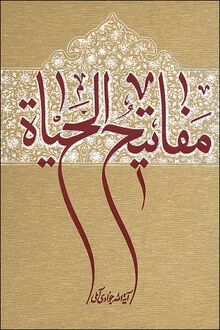 Since Mafatih al-jinan covers mostly individual acts of worship, Ayatollah Jawadi Amuli has composed and published the book of Mafatih al-hayat [literally meaning "keys to life"] based on hadiths regarding social and family relationships as well as daily life. This book is sometimes introduced as the second volume of Mafatih al-jinan.

Some Years before the publication of Mafatih al-hayat, Ayatollah Jawadi Amuli, the author, during a Friday Prayer sermon in Qom said: "We need a second volume for Mafatih al-jinan, which has not been written yet. God bless Shaykh Abbas Qummi and other scholars, but prayers; Dhikrs and ziyaras are not the only part of the religion."

This book comprises of six chapters: