Qadamgāh (Persian: قَدَمْگاه) refers to places of pilgrimage in the Islamic world where there is believed to be a footprint attributed to an Infallible (a) or a prominent religious figure, or a place where a holy person is thought to have stepped in. The dome of a qadamgah in Nishapur.

"Qadamgah" literally means the place of foot or the place of stepping. In the Islamic culture, it refers to a place where a prophet, an Imam, or another holy person has stepped, or where there is a footprint on a stone or something else which is thought to belong to a prophet or an Imam. In some regions, a qadamgah is referred to as "nazargah" (place of looking) or "gozargah" (place of passage).

In some qadamgahs, there is a print of two human feet and sometimes one foot on a piece of stone. The stone is usually kept and visited in a building.

Visiting the footprints of religious figures is common among followers of other religions as well. Hindus visit the footprint of Shiva, and Buddhists visit the footprint of Buddha. Some qadamgahs in the Islamic world are attributed to Israelite prophets. There are footprints attributed to the Prophet Adam (a) in Ceylon and Mecca. Maqam Ibrahim (a) (Stance of the Prophet Abraham (a)) in Mecca was also visited as a qadamgah. There are other qadamgahs in Iran, Syria, and Palestine attributed to Methuselah, Isaac (a), Jacob (a), Job (a), Idris (a), Khidr (a), Moses (a), and Jesus (a).

History of Qadamgah in Iran

Some qadamgahs in Iran trace back to the late Abbasid period, that is, the seventh/thirteenth century. However, most qadamgahs date back to the Safavid period. The construction of qadamgahs increased in this period, because Safavid kings considered qadamgahs to be sacred and constructed them as a means for the propagation of Shiism. According to a statistics published in 1996, there are 1,185 qadamgahs and nazargahs in Iran, 250 of which are attributed to the Prophet Muhammad (s), Imams (a), and holy people. Most of these qadamgahs are located in Hormozgan, Kerman, Khuzestan, and Khorasan provinces.

Qadamgahs Attributed to the Prophet (s)

Of one of the stones on which there is a footprint attributed to the Prophet (s) installed in a dome near Zamzam, it is said that Sharif 'Awn al-Rafiq, the ruler of Mecca, destroyed the dome in 1229/1813 and then sold the stone to a Hindu. In a small town known as "Ithr al-Nabi" near Cairo, the stone of "Ithr al-Nabi" was visited in a mosque. The inscriptions on the stone show that its dome was reconstructed by Ibrahim Pasha in 1071/1660.

Indian Muslims believe that they had brought stones on which there were the Prophet's (s) footprints from Hijaz to India. Qadam al-Rasul in Lucknow and Qadam Sharif in Delhi are attributed to the Prophet (s).

The claim about the Prophet's (s) footprints on stones cannot be found in early sources or reliable hadiths. According to some Muslim scholars, such beliefs were contrived by laypeople, and visiting such places is objectionable.

Qadamgahs Attributed to Imam 'Ali (a)

Qadamgahs Attributed to Imam al-Rida (a) 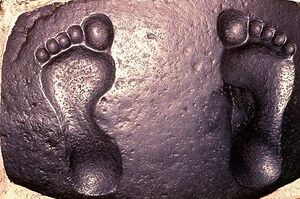 The trace of feet attributed to Imam al-Rida (a) in Nishapur.

As a result of Imam al-Rida (a)'s travel from Medina to Merv, in which he crossed a major part of Iran, there are many qadamgahs attributed to him. The best known qadamgah attributed to the Imam (a) is the one in Nishapur which was constructed at the command of Shah 'Abbas in 1020/1611 over the relics of another building. It is widely believed that there is a human footprint on a black stone installed inside the building which is attributed to Imam al-Rida (a).

No particular ritual is cited for visiting a qadamgah. Believers usually kiss the footprint in a qadamgah, make tabarruk with it, and sometimes bury the dead near a qadamgah. They also endow for the qadamgah, such as a place for its visitors, or giving nadhr foods to its visitors.