Shrine of Imām al-Ḥusayn (a) (Arabic: العَتَبَة الحُسَینیَّة) is the resting place of Imam al-Husayn (a), some people from Banu Hashim and some of his companions in the ‌Battle of Karbala, who were martyred on Muharram 10th, 61/October 10, 680 in a battle with the army of 'Ubayd Allah b. Ziyad.

Al-Mukhtar al-Thaqafi made the first building on Imam al-Husayn's (a) grave. The building was later reconstructed and developed by Shias and followers of Ahl al-Bayt (a), especially rulers and governors.

After the martyrdom of Imam al-Husayn (a) and his companions, a clan of Banu Asad buried their corpses where they were martyred. The only sign on Imam al-Husayn's (a) grave at the time was a lump of soil.[1]

When al-Ma'mun al-'Abbasi took over the caliphate, all Abbasids opposed him. So to reinforce and establish his power against their oppositions, al-Ma'mun appealed to Imam 'Ali's (a) progeny and his Shiites. Thus, he reconstructed Imam al-Husayn's (a) mausoleum and allowed Shiites to visit the place as well as the graves of other Imams.

The building made at the command of al-Ma'mun was there until 232/846-7, but when al-Mutawakkil al-'Abbasi took over the power, he ordered the destruction of Imam al-Husayn's (a) mausoleum and submerged it with water.[4]

In the late 247/862, when al-Muntasir al-'Abbasi took over the caliphate, he ordered the construction of a dome on Imam al-Husayn's (a) mausoleum. The building remained intact until 273/886-7, that is, the period of al-Mu'tadid al-'Abbasi's caliphate.[5]

During the caliphate of al-Ta'i' b. al-Muti' al-'Abbasi, 'Adud al-Dawla al-Daylami took over the power in Baghdad. In Jumada I, 371/November- December 981, he ordered the reconstruction of the shrine of Imam al-Husayn (a). In addition to the reconstruction of the building, 'Adud al-Dawla also decorated the place and built porches around the shrine. He decorated the darih with teak and precious cloth, with a wooden cover. He also donated some candlesticks to the shrine. This led to the flourishing and development of Karbala in matters religious, social, and commercial.

In 369/979-80, Mu'izz al-Dawla al-Daylami assigned 'Imran b. Shahin with the governance of Batih, near Wasit, where 'Imran began to build a porch later known after the name of Sayyid Ibrahim al-Mujab. The mosque he built near the porch remained intact until the Safavid period. In this period, according to a fatwa permitting the attachment of mosques to the shrine of Imam al-Husayn (a), it was included within the developed building of the shrine. Parts of this mosque are still included in the shrine as storage for the shrine's carpets. It is located behind the porch known as the Nasiri Porch.

In 407/1016-7, two big candles (lightening the shrine) fell on the carpets and set the curtains and covers on fire. The fire then spread to the porches and the dome such that only the walls, parts of the shrine and 'Imran b. Shahin's mosque remained intact.[7]

After taking over the power, Hasan b. Mufaddal b. Sahlan began to reconstruct the shrine, parts of which —including the domes and the porches— were burnt in a fire. In 412/1021-2, he repaired the dome and the burnt parts and ordered a wall around the shrine.[8]

Years later, in 620/1223-4, Muhammad b. 'Abd al-Karim al-Kindi was appointed as al-Nasir li-Din Allah's minister. During his ministry, he repaired, renewed, and reconstructed the damaged parts of the shrine, covered the walls and the porches with teak, and installed a wooden box covered with a precious cloth on the grave.[9]

Uways b. Hasan al-Jalayiri renewed the mosque and the shrine in 767/1365-6 and built a semicircular dome over the darih. The dome rested on four porches on the four sides of Imam al-Husayn's (a) grave, and the exterior sides of each porch constituted a porch of the shrine. A large dome was built on these four porches, constituting a novel geometrical shape. The building was later completed by one of Uways's sons, Ahmad, in 786/1384-5. It was built in such a way that one could see the whole shrine and the mausoleum and the darih if they stood outside towards qibla. Moreover, pilgrims could walk around the darih.

Ahmad al-Jalayiri built the portico opposite the courtyard, known as the Golden Portico, and the mosque of the courtyard, which is square-shaped around the shrine. He also decorated the porches and the internal building of the shrine with mirrors, inlays, and Kashan's tiles with portraits of natural sceneries. At Ahmad al-Jalayiri's command, the two minarets of the shrine were also decorated by yellow bricks of Kashan.[10]

In 1032/1622-3, Shah 'Abbas I constructed a copper darih for its box and decorated the dome with Kashan's stones.

In 1048/1638-9, Sultan Murad IV, an Ottoman king, visited Karbala and ordered the exterior part of the dome to be whitened by plasters.[11]

In 1135/1722-3, Nadir Shah's wife, who had a great wealth at her disposal, ordered the shrine administrators to embark upon an extensive reconstruction. In 1155/1742-3, Nadir Shah visited Karbala and ordered the decoration of the existing buildings. He also donated precious gifts to the treasury of the shrine.[12] 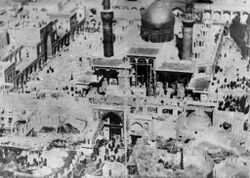 In 1211/1796-7, Aqa Muhammad Khan Qajar ordered the decoration of the shrine's dome with gold. But in 1216/1801-2, Wahhabis attacked Karbala and destroyed the darih and the porches and stole all precious property in the shrine's treasury.

In 1227/1812-3, the shrine's building was wearing out. Thus people of Karbala wrote a letter to Fath 'Ali Shah Qajar and informed him of the damages. He sent a supervisor to check the expenses and the reconstruction and then ordered the reconstruction of the building and the renewal of the golden sheets of the dome.

In 1232/1816-7, Fath 'Ali Shah Qajar built a new silver darih, gilded the dome's portico, and reconstructed everything destroyed by Wahhabis.

The courtyard of Imam al-Husayn's (a) shrine includes the porches of the shrine, also known as "jāmi'". Before 1948, bazaars and other buildings were adjacent to the shrine, with no street between them. In that year, a street was built around the shrine.

The courtyard's interior was rectangular-shaped, with two small additional sides—in fact, it was hexagonal, just like the darih. However, in the expansion of the shrine in 1947, the two additional sides—one in the southeastern part and the other in the northeastern part—were removed. Thus the courtyard looks rectangular from the inside, though it seems oval from the outside.

Before the expansion of the shrine in 1947, there were mosques and Islamic seminary schools around the courtyard, and their doors used to open to the shrine. However, Karbala's municipality destroyed all these schools and mosques and constructed a street around the shrine.

The whole area of the courtyard is 1500 square meters. There are 65 porches around the courtyard, and there is a chamber in each porch. The chambers belonged to the students of the Islamic seminary schools to discuss their studies there, and some of them were allocated to kings, rulers, governors, and Islamic scholars.[16]

The shrine's courtyard has some gates, each opening to a district in Karbala. The gates are located under tall porticos decorated with tiles on which Quranic verses with the Kufic calligraphy are inscribed.

In the past, there were seven gates in the courtyard, but today it has ten gates:

There is a tall dome over Imam al-Husayn's (a) mausoleum, covered with pure gold. The lower part of the dome contains ten windows to the outside. The dome is 37 meters high. It looks like an onion from the outside.[18]

Within ten meters from the south of the shrine, two large golden minarets are about 25 meters high with four-meter diameters. The two minarets were built in 786/1384-5 during the period of Uways al-Jalayiri and his son, Ahmad.[19] The Golden Portico is located on the southern side of the courtyard with a tall ceiling. It consists of three parts: the middle part, which is the tallest, and two shorter lateral parts. The part under the Portico is separated from the courtyard by metal fences located in the middle of pillars. People go inside the shrine from the two lateral sides. The walls of the Portico are coated with pure gold, and the upper parts of the walls are covered with tiles.[20] Darih of Imam al-Husayn (a) which dates back to Qajar era.

Under the dome, there is a large silver, polygonal darih, in which the graves of Imam al-Husayn (a) and his sons, 'Ali Asghar and 'Ali al-Akbar, are located.[23] Different darihs have been built and installed on Imam al-Husayn's (a) grave in different periods. The last time when the darih was changed was in 2012-3. Mausoleums of the Martyrs of Karbala

'Ali al-Akbar is buried below Imam al-Husayn's (a) feet. The two lower sides of the darih belong to 'Ali al-Akbar and the martyrs of Banu Hashim. This part is adjacent to the exterior part of the darih.

All martyrs of Karbala —except Abu l-Fadl (a), Hurr b. Yazid al-Riyahi, and Habib b. Muzahir— are buried near Imam al-Husayn's (a) grave on the southeastern side of his grave. These graves are located in a 12-meter chamber with an inlaid box and a silver window. Above the window, there are tiles in which the names of 120 martyrs of Karbala and a prayer addressed to them are inscribed.[24]

The killing zone is the place in which Imam al-Husayn (a) was decapitated. The place has a special chamber with a silver door and a window towards the courtyard on the southwestern side of Habib b. Muzahir's porch. Its floor is covered with marbles, and it has a cellar with a silver door.[25]

"Al-Ha'ir al-Husayni" is the area of Imam al-Husayn's (a) mausoleum.

This is called so because when al-Mutawakkil al-'Abbasi ordered the destruction of the mausoleums of Imam al-Husayn (a) and the martyrs of Karbala, he ordered his agents to submerge the place with water. The water surrounded the grave without flowing over the grave. This place includes the main center of Imam al-Husayn's (a) shrine, the dome, the darih, and the graves of the martyrs of Karbala.[26]

Treasury and the Library of the Shrine

People Buried Inside the Shrine

During several centuries, many prominent figures, princes, rulers, poets, and scholars have been buried inside the shrine; here are some:

Trusteeship of the Shrine

Umm Musa, al-Mahdi al-'Abbasi's mother, appointed some people as administrators of Imam al-Husayn's (a) shrine. She gave them salaries. Harun al-Rashid did the same. These people were the first boards of trustees of the shrine.

Since 'Alawis constituted the majority of people in Karbala, the city's governance was in the hands of their naqib. A naqib or the head of 'Alawi sadat was of a high social and political ranking with special authorities. A person had to fulfill some requirements to occupy the position. It was specific to 'Alawi households and was transferred from one 'Alawi household to another provided that they satisfied some conditions. One of the most important tasks was the administration of 'Alawi affairs as well as Imam al-Husayn's (a) shrine.

After the fall of Baghdad by Mongols in 656/1258-9, there is a little report of how the shrines of Imam al-Husayn (a) and Abu l-Fadl (a) were administered. In the early 8th/14th century, some people from Banu Asad, who could extend their dominance in the nearby territories, occupied the shrine's administration.

The trusteeship was in the hands of non-'Alawis until the late 13th/19th century. After that, it was controlled by the Al Tu'ma household until the end of the Ottoman government and the subsequent periods.[29]

Shiites frequently visit Imam al-Husayn's (a) shrine. Most pilgrims of the shrine gather on days of Ashura, Arba'in, and Sha'ban 15 in Karbala.

The soil of Imam al-Husayn's (a) grave (turba) has special rulings: