Coffin-carrying or Tābūt Gardānī (Persian: تابوت‌گردانی) refers to carrying symbolic coffin-like structures in a symbolic funeral of the bodies of martyrs as a part of old dramatic ceremonies which are said to have entered mourning ceremonies of Shi'a since at least 5th/11th century. In the mourning ceremony of Imam al-Husayn (a), a coffin is carried in the groups of mourners, which is the symbol of the Martyrs of Karbala. This ceremony is held with some differences in India, Iran, Indonesia, Caribbean islands, and Tobago. On the anniversary of the martyrdom of Imam Ali (a) and Imam al-Kazim (a), Shi'a of Iraq carry a symbolic coffin.

Coffin-carrying has a long history among different nations of the world. For example, making symbolic coffins of martyrs and the ceremony of carrying them in mourning groups has existed in Iranian culture. According to historical reports, from long times ago until the first centuries of the Islamic period, every year at the anniversary of the death of Siyavash, the epic character of Iran, people of Transoxiana made a body like Siyavash and put it in a frame and turned it around the city while they beated their chests and heads and recited Nawha.

In the cemetery of Tuk Qal'a remained from before the birth of Jesus (a) at the tip of the Oxus Delta, coffins have been found, which have been like boxes made of marble, stone or clay. On them, there are simple drawings in black, one of which shows some scenes of mourning. In those scenes, a body would be placed in a coffin and mourners in certain clothes mourned around it. The ceremony of mourning for the death of Siyavash and carrying a symbolic coffin in the anniversary of his death shows that it has been important throughout the central Asia, especially since the Achaemenid period and according to Tolstov, the Russian researcher, the ceremony of Siyavash had a central significance in religious and social beliefs.

The tradition of coffin-carrying and coffin washing for rain in the autumn was also among ancient ceremonies of many nations, signs of which have still remained in some societies, including the Iranian society. Istakhri mentions the tradition of coffin carrying for rain seeking, which was still common among the people of Shush until after the emergence of Islam.

The Memorial Ceremony of Coffin in Indonesia 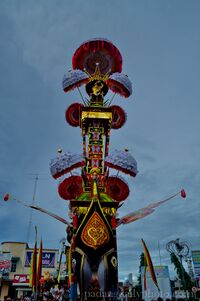 According to an old tradition, every year in the month of Muharram, Muslims of Indonesia, especially Muslims of Sumatra island, hold the mourning ceremony of Imam al-Husayn (a) called Tabuik. In the morning of the Day of 'Ashura, they take small coffins called "Tabut Linwatiq" house to house and take donations. On the night of Muharram 12, all people go out of house, and every group and tribe take a coffin and go to one of the rivers of the city and while they recite poems, drop their coffin to the water.

In some areas of two islands of Caribbean and Trinidad, Hindu, Muslim and Christian religious groups hold rituals of the Muharram they call Howsi following the tradition of immigrant Indians by building small and big coffins and some of them make two moons as the symbol of Imam al-Hasan (a) and Imam al-Husayn (a). Every group has a certain area called Chuk near the place of building Tajas ('Alams) and a place called Karbala in the seashore, which are considered holy during the three days of holding Howsi rituals. Every group turns their small and big Tajas in Chuk with certain manners. Later, they drop small Tajas at the night of Tasu'a and big Tajas on the day of 'Ashura to the water. Before that, they bury the soil they collect and keep in Tajas in their Karbalas at the sunset of 'Ashura.

Coffin-Carrying of Shi'a in Iraq

According to some reports from the early 5th/11th century, upon visiting the shrines of Imam Ali (a) and Imam al-Husayn (a), Shi'a of Karkh in Baghdad carried structures decorated with gold called Manjaniq. They were the first and oldest religious sign of Shi'a and a symbol of coffin or the box upon the grave of the first and the third Imams (a). Ibn al-Jawzi considered carrying Manjaniq by Shi'a following the tradition of carrying a similar structure by Sunni youths of Isfahan upon going to visit the grave of Mus'ab b. Zubayr. Manjaniq was apparently a symbol like Nakhl used by Shi'a of Iran today.

Coffin-Carrying of Shi'a in Iran

The rituals of coffin-carrying among the Shi'a of Iran has perhaps spread simultaneously with the formation of first gatherings of Shi'a for the mourning of religious martyrs and the march of the groups of visitors of the shrines of Imam Ali (a) and Imam al-Husayn (a).

Foreign tourists who came to Iran since Safavid era gave reports of the tradition of coffin carrying in the groups of mourning during the days of religious mourning in their travel logs. When Delavaleh, the Italian tourist describes the mourning ceremony on Ramadan 21, 1026/September 22, 1617, he mentions coffins covered with black cloth which people carried on their shoulders and a collection of different weapons were placed on the coffins. Delavaleh considered these coffins a symbol of the coffin of Imam Ali (a). When describing the mourning ceremony on 'Ashura, 1027/December 28, 1617, Delavaleh mentioned coffins around which were covered with black cloth and on each, one green turban and a sword were placed and some weapons were hung from around them. In a report of the mourning ceremonies in Shiraz in 1200/1785, William Franklin mentions coffins of martyrs decorated with swords, turban, feathers of egrets. Also, in his description of Ta'ziyas of the people of Tehran in the presence of Nasir al-din Shah in Muharram of 1277/July of 1860, Heinrich Brugsch mentioned carrying a frame upon which there was something like the coffin of the Prophet (s) covered with Kashmiri shawl, decorated by some alight candles. He speaks of burying the coffins of martyrs with certain rituals.

In arid and semi-arid areas of Iran, the tradition of coffin washing or coffin carrying was held seeking rain, especially in autumn. For example, until some years ago in Tabriz, old men took a coffin from a local mosque to a spring or stream of water and placed it in water until it rained.

A view of the carpet-washing ceremony

Carpet-washing is a religious tradition of Kashan and Khaveh village of Ardehal, every year they held it on the second Friday of autumn in Mashhad Ardehal, near the central city of Kashan, Iran. In this ceremony, participants wash a carpet while they hold wooden sticks in the spring as a symbol of washing the blood of Ali b. Muhammad al-Baqir (a). They take a carpet as a symbolic coffin of Ali b. Muhammad al-Baqir (a) from his shrine to a stream of water with certain manners and pour water on it as if they are washing it thoroughly. In addition to a religious show, a tradition of carpet-washing commemorates the memory of the martyrdom of Ali b. Muhammad al-Baqir (a) in Ardehal and also refers to the ancient tradition of rain seeking by coffin washing. Carrying the carpet to the water spring and washing it or pouring water on it to seek rain and removing draught has also been common among the people of Maragheh.