Palm-carrying or Nakhlgardānī (Persian: نَخْل‌ْگَردانی, literally: carrying a palm) is a ceremony held by the Shi'as in some areas as a symbolic funeral of Imam al-Husayn (a) on the Day of 'Ashura. In this ceremony, a huge structure consisting of interwoven carved woods in the shape of a very large leaf or the cypress tree (which is called Nakhl) covered with a black cloth and decorated with colorful scarfs and a mirror is carried by people in husayniyyas, tekyehs and other places in which the mourning of Imam al-Husayn (a) is held. Nakhlgardani is very popular in cities and villages around the central desert of Iran, including south of Khorasan, Semnan, Damghan, Khomeyn, some areas in Qom, Kashan, Abyaneh, Khur and Biabanak, Zavareh, Ardestan, and Nain. The greatest number and the most outstanding "Nakhls" of Iran are centered in Yazd.

The "Nakhl" in black has no similarity whatsoever to the palm tree, and there are different accounts for why it came to be called "palm" (Nakhl). According to historical documents, the ritual in Iran traces back to the Safavid period.

The use of the word, "Nakhl" (palm) and the appellation of the symbolic funeral of Imam al-Husayn (a) as "Nakhlgardani" (Palm-Carring) goes back to the Safavid period. The ceremony was popular in the Safavid period in central deserts of Iran in a more or less similar way to how it is practiced today. Thus, many scholars take the ritual of Nakhlgardani to have been invented by the Safavid dynasty.

The Shape and the Structure of the Funeral Palm 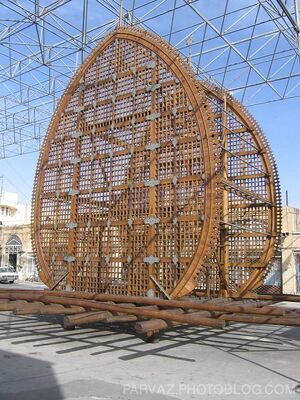 The so-called "palm" is a wooden, voluminous chamber in the form of a rectangular cube with a gable roof. Depending on its size, its framework has a wooden scaffolding with a binder at bottom consisting of 8 to 20 wooden joists and 4 to 12 tall wooden pillars. The bottom of the Nakhl consists of a number of joined wands and twigs as well as some bonds and ties. The two front and back sides of the Nakhl are also wooden and usually net-like. 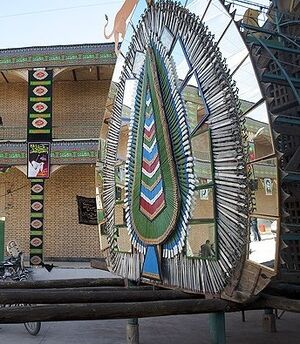 Front side of a Nakh with the shape of cypress tree

The word "Nakhl" means palm tree. It is not known why this chamber is called Nakhl. The main reason for the popularity of this appellation might be that according to some hadiths and popular beliefs, Imam al-Husayn's (a) revered corpse was put on branches of a palm tree and then carried to its burial place.

Another alleged reason for referring to the chamber as "Nakhl" is that old Nakhls were apparently made up of the woods and the leaves of palm trees.

It is also possible that the chamber is called "Nakhl" because of the sanctity of the palm tree in the Iranian culture. In the Iranian religious culture, the palm tree is associated with resurrection, fertility, immortality, power, and firmness, as the coffin is associated with sacredness, power, immortality, the manifestation of the sacred force, and the divine will.

The Semiology of the Parts

According to the folk beliefs formed throughout the years by native people, every element in the Nakhl is a symbol of an event or a character in the Battle of Karbala. Here are the symbols:

Today the Nakhls do not have such decorations. They are simply covered in black with simple decorations. 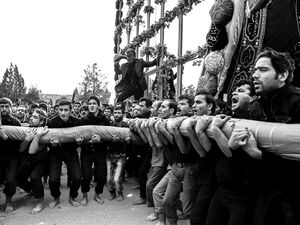 The ritual of Nakhlgardani has two parts: first, the decoration and preparation of the Nakhl of mourning, which is referred to as "Nakhlbandi", and second, the lifting and carrying of the Nakhl. 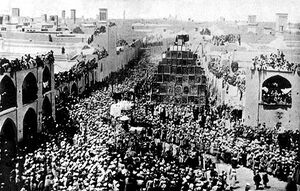 An old photo if Palm-Carring in Yazd, Amir Chakhmaq  Square 1901.

"Nakhlbandī" (Persian: نَخل‌بَندی, literally: tying the Nakhl) refers to the preparation and decoration of the Nakhl. This is done in the First Ten Days of Muharram, and in particular, 2 or 3 days before Tasu'a.

Depending on the size of the Nakhl, the number of its accessories and decorations, and the type and style of its decoration, it takes from one to several days to prepare a Nakhl. Huge Nakhls are prepared, covered in black and decorated within several days, usually from 5 Muharram to 9 Muharram.

To tie a Nakhl, its surface is wholly covered with black and green cloths as well as scarfs and termeh. The cover is decorated, especially on its front and back sides, with flower bouquets, mirrors, and various ornaments. Other ornaments of the Nakhl include a sword, a dagger, a dirk, a shield, a helmet, some lanterns, a lamp or a big candle, some small banners, nazar (an eye-shaped amulet), 40 inscriptions of Bism Allah, and some portraits of the Imams (a).

Sometimes a green turban, a fabric belt, and a robe are put on the Nakhl as symbols for Imam al-Husayn's (a) clothes. A bell usually hangs from the Nakhl which rings while the Nakhl is carried. When it rings, people in the procession recite the salawat. 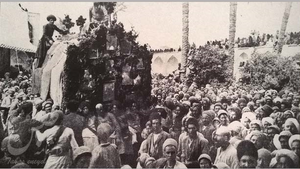 The Nakhl covered in black is usually lifted and moved around on the Day of 'Ashura. In some areas, this is practiced on 11 Muharram. The Nakhl is carried to Husayniyyas or squares of the city or the village or in passages and districts of the city. Inside the Husayniyyas or squares, the Nakhl is moved around with different time intervals. Each time it is moved across or along or around the Husayniyya and the square once or two or three times. Outside the Husayniyya or the square, Nakhl is carried to passages by people in mourning processions who practice chest-beating and self-flagellation. They sometimes carry it to a visiting place or an Imamzada of their district or to a place where mourning ceremonies and Rawdakhwani are held, or to the house of a senior clergy or a mujtahid of the district. In some areas, a man sits on the wooden scaffolding in front of the Nakhl, and gives directions to people who carry the Nakhl. In some other areas, one or two people in black sit in front of, and behind, the Nakhl, reciting the Qur'an and chawush while playing the cymbal (called Sinj). In other cities, cymbal-players move ahead of the procession together with people who carry the 'Alam and banners.

The director or guide of the procession walks a few steps ahead of the Nakhl, giving directions on the way they should go and instructions on how to carry the Nakhl.

In different areas, there are specific manners for how to lift the Nakhl some of which are still observed. For instance, while lifting the Nakhl, each of its legs or handles should be grasped by a specific tribe or district or occupation. It was usually an inherited right: for example, in Nasrabad Pishkooh (Yazd, Iran), each leg of the Nakhl is lifted only carpenters, blacksmiths, butchers, tanners, saddlers, water suppliers, and the like. The tradition is still preserved in this area as well as in Meybod, Taft, etc.

Here are some folk beliefs about the Nakhl:

The vows (or nadhrs) associated with the Nakhl are, according to the local beliefs, as follows: