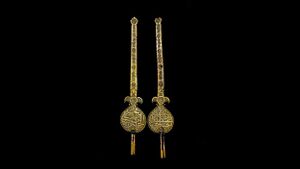 Two Tughs related to the time of Safavid Dynasty

Tūgh (Persian: توغ) is a kind of 'Alam with a particular shape made by the Shi'as in some areas of Iran for the mourning ceremonies of the Infallibles (a), especially for the Mourning of Muharram. It is carried by people in different districts of the city. During the year, Tugh is kept in Tekyeh, Husayniyya, coffeehouses, or houses of a senior person in the district.

In the past, Tugh was put to other uses as well. In the Safavid period, the Tugh turned into a sacred religious icon in Iran.

Tugh is a rod from the top of which a tassel made by a horsetail was hanged. It was used to mark the place in which the army gathered. The kings of the Han dynasty (202BC - c. 220) moved the "Tu" in their funerals ahead of the coffin. In Today's Turkish language of Azerbaijan, "Tuk" means hair. "Tukh" or "Tuq", meaning the flag of the battle, found its way to Pamir, Pashto, Tibetan, and Tungusic languages. In his Lughat al-Turk (written in 466/1073-4), Kashghari gave different meanings for the word "tugh", such as the dust rising from a horse's hoof while running, kettledrum, drum, dyke, cover, flag, and banner.

It seems that the oldest use of the "Tugh" was in Chinese. They installed it on the half side of their Empire's chariot.

The word "tugh" underwent plenty of changes in its shape, meaning, and uses, including:

In the Ag Qoyunlu and Qara Qoyunlu governments, having a Tugh or Tuq (a crown of mane or chicken feather) was essential to the position of commandership. The ranking of a commander was known from his Tughs.

According to historical documents available to us, Tugh was initially a military sign for commanders in the battles.

Tugh was a sort of banner used by Mongols. Genghis Khan (reign: 1203-1227) had a white Tugh with 9 legs which he inserted the ground when calling and gathering his army or when celebrating his victories in battles.

In the Safavid period, it was common for the armies, and in particular, the Qizilbash armies, to hold a Tugh in the form of an 'Alam. Such 'Alams or banners were carried ahead of the army by people who were called "Tughchi", "Tughdar", "Bayraqdar" (all the three mean "the holder of the Tugh"), and in Ottoman Turkish, "Tugh Baygi" (the holder of the flag or sanjaq). A "mahchah" (a small moon-shaped icon) is usually installed on top of these banners.

In this period, a person who was honored to have the position of the commandership was given a "drum" and a "banner" ('Alam), which were signs of commandership. The drum and the banner have been identified with "Tugh" and "Naqqara." In the army, Tugh was a symbol of power, glory, and resistance.

When Shiism was announced as the official religion in Iran in the period of Isma'il I, a type of Tugh turned into a religious sign and a sacred banner and found its way to religious congregations and mystical Tariqas.

Tughs Remaining from the Safavid Period 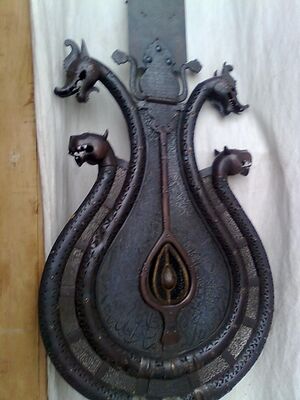 Tugh of Shahshahan district in Isfahan

Some Tughs have remained from the Safavid period. They had religious uses and were endowed to the Tekyeh and Imam al-Husayn's (a) mourning ceremonies.

An old such Tugh was the one endowed by Shaykh Haydar, the father of Shah Isma'il I, the founder of the Safavid dynasty, to the Tekyeh of Ardabil. Later, it was taken from there to Qazvin.

In the past, there was a Tugh in every district of some cities, which was kept in a Tekyeh, a Husayniyya, a coffeehouse or the house of a senior person or clergy of the district. For example, there were 5 historical Tughs in Qom in the five old districts of the city. Old districts of Kashan also had their own Tughs. The Tughs were signs for the districts and the people residing there. The places where the Tughs were kept were called "Patugh". The word "Patugh" consists of two parts: "Pa" which in Persian means location and place and "Tugh", so "Patugh" means the place of Tugh.

The Shape and Structure

The religious Tugh usually has a metal blade with a steel pear-shaped or cypress-shaped head with a long prong standing on a small net-like metal box similar to a darih and a wooden or metal cross-shaped leg. On the blade, some Quranic verses and supplications are engraved. On the horizontal axil of the Tugh's leg, there are two symmetrical metal peacocks on the two net-like boxes, and on the two metal nodes connected to the left and the right parts of the blade's underside, there are two metal dragons with open mouths. The peacock and dragon icons are expressive of some hidden secrets in the religious mindset of the Iranian Shiite community. The blades of old Tughs had two pear-shaped bodies connected to each other, thus constituting a single tetramerous curved blade. 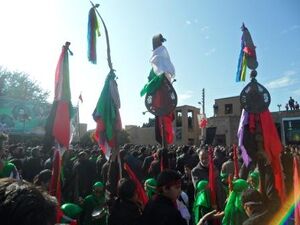 On the occasions of religious mourning, people of every district used to carry their own Tughs, which counted as their distinguishing mark ahead of a mourning procession. Before carrying the Tugh, it was decorated with some Termeh scarfs and green cloths covering its horizontal axil.

Time of the Procession

The Tugh is carried on specific dates. For example, in Kashan, the Tugh is carried on the eve, and the Day of 'Ashura, on the 7th day after Imam al-Husayn's (a) martyrdom, on the anniversary of Prophet Muhammad's (s) demise on Safar 28, and on the anniversary of the martyrdom of Imam Ali (a) on Ramadan 21. They take the Tugh out of their districts, practice chest-beating, and carry it around old districts and the bazar.

People who carry the Tugh hold it in a bent way as a symbol for the martyrdom of Abu l-Fadl al-'Abbas (a), the flag-holder of Imam al-Husayn (a) and the fall of his flag.

Every year in Shahrud, a city in northeast Iran, the ceremony of tying and carrying the Tugh is held on Muharram 5. On this day, the older people of the district of Tekyeh Zanjiri in Bazar take the Tughs from houses to the mosques and Tekyeh of their districts. They then take the Tughs from there to the district of the Qal'eh Valuva (Valuva Castle) where they connect all the Tughs, form processions of Tughbandan, and take them to the old mausoleum along with chest-beating and Nawhakhwani.