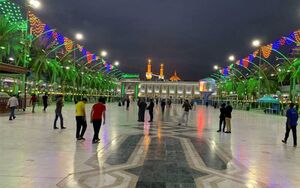 Bayn al-Ḥaramayn (Arabic: بین الحرمین; literally: between the two shrines) is the distance between the Holy Shrine of Imam al-Husayn (a) and the Holy Shrine of al-'Abbas (a) of 378 meters. In the past, Bayn al-Haramayn was not a space between the two shrines; rather, it was occupied by residential and commercial buildings. During Saddam, buildings in this distance were destroyed for the shrines to be expanded and developed, so the present space was built. After the collapse of Saddam Hussein, the project of developing Bayn al-Haramayn was examined and executed as one of the most important projects for the reconstruction of the shrines by Iran and Iraq.

As historical books, biographies and even encyclopedias and old poems imply, before the destruction of houses and buildings between the two shrines were not called "Bayn al-Haramayn". The only location called so was Tehran's Bayn al-Haramayn Bazaar, built during the Qajar period, located between Masjid Shah and Masjid Jami' in Tehran. The term entered the literature of Ashura after the construction of Bayn al-Haramayn. 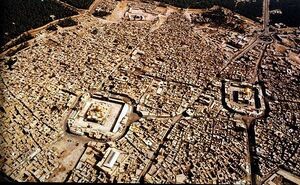 Before the construction of Bayn al-Haramayn, there was a district between the two shrines with traditional architecture—narrow and long alleys with houses and shops. Al-Sayyid Muhsin al-Hakim planned to expand the shrines and connect them. But it was costly to purchase the houses and shops as it was difficult to make the owners consent. Moreover, there were schools and mosques in the distance that made it more difficult.

In 1393/1973-4, the Endowment Ministry of Iraq undertook the administration of holy shrines, and in 1400/1979-80, a workgroup was formed to reconstruct and expand the two shrines.

In Muharram 1405/1984, Saddam went to Karbala announcing that tens of millions of dinars will be allocated to the expansion of the shrines and their connection with a shared square. In this project, the areas and districts around the shrines were purchased. The governor of Karbala was provided with 1,000,000 Iraqi dinars, equal to 10,000,000 dollars, to expand the shrines and construct Bayn al-Haramayn. 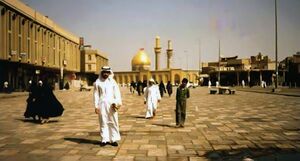 Bayn al-Haramayn before the 1991 Uprising in Iraq.

After two years, Bayn al-Haramayn was opened on Jumada II, 1407/1987 together with other projects, such as the renewal of the gilding of Imam al-Husayn (a)'s holy shrine. In the project of expanding the shrines, houses and shops with a width of 40 meters were destroyed. Some historical monuments, seminary schools and old mosques, and graves of some scholars, were destroyed in this project. 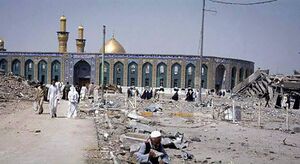 Bayn al-Haramayn after the 1991 Uprising in Iraq.

The Shiite uprising in the Intifada of 1991 and the attack of the Ba'th army to Karbala left a great deal of damage to the two shrines. Although Saddam's government tried to reconstruct the shrines in the subsequent years, the damages were still there until the fall of Saddam.

As a Space for Visitors of the Shrine

After the fall of Saddam's regime, with the project of reconstructing shrines in Iraq, the expansion and the reconstruction of the shrines of Imam al-Husayn (a) and al-'Abbas b. 'Ali (a) came under consideration. The space made between the shrines was used for visitors, especially for mourning ceremonies attended by millions of pilgrims in Arba'in.

Expanding Bayn al-Haramayn began in September-October 2010 to provide services for the pilgrims and facilitate their traffic between the two shrines with a completely roofed area. In one of these projects, the destruction of some buildings and hotels started. The area is about 1,500,000 square meters, starting from Maytham Tammar Street to Jumhuri Street.

Since buildings and hotels were costly, a lot of money was required to purchase and destroy them. The Iraqi government provided part of the fund, part of it was provided by Karbala municipality, and the rest by donations. The project is planned to be finished by 2035.

Another project related to Bayn al-Haramayn was to pave it with stones. This project was done with Italian marbles by the Iraqi Ministry of Reconstruction and Residence with a fund of 25 billion and 393 million Iraqi dinars. The area was 24,270 square meters in 2010; it was finished in July-August 2013. The project included the pavement of Bayn al-Haramayn with marbles, parasols, the development of infrastructural and electric installations, water coolers and air-conditioners, closed-circuit cameras, and auditory devices. The stones used for the courtyard of Bayn al-Haramayn are the same as the ones used for the courtyard of Masjid al-Haram. The stones are 5-centimeter thick and can help cool the environment.

Other projects in Bayn al-Haramayn include water supply for the green space, sewage system, electric and lighting system, water refinery with water coolers, a place for wudu, and some control and information systems, pagers, fire alarms, and other facilities.

The project of Safinat al-Najat is the largest project to expand Bayn al-Haramayn. A connection between the shrines of Imam al-Husayn (a) and al-'Abbas (a) is supposed to be built on two floors, keeping the shrines as they are. Iranian engineers designed it. It was then offered in an international call for bids and was finally confirmed by international evaluators.