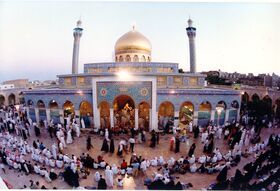 This place is among pilgrimage sites for Shi'a. The area where the shrine of Lady Zaynab (s) is located has been a village called Rawiya. Now, this area is called al-Sayyida Zaynab town.

The shrine of Lady Zaynab (s) has been reconstructed and expanded several times during history. Since 2012, after the crisis worsened in Syria and Takfiri terrorists emerged in this country, this holy shrine was attacked by mortars and suicide bombings several times and some parts of the shrine were destroyed. Following these attacks, different groups of people went to Syria to defend the shrines of the Ahl al-Bayt (a). These groups, known as defenders of the shrine, prevented terrorist groups from attacking the shrine of al-Sayyida Zaynab (s).

History of the Shrine

According to researches, there is no source available until the fifth/eleventh century to show that there was a tomb or dome built upon the burial place of al-Sayyida Zaynab (a). Only one source in the second/eighth century refers to the existence of a pilgrimage site at the current location. According to the report, a woman related to Alids families called Al-Sayyida Nafisa bt. al-Hasan al-Anwar, a descendant of Imam Ali (a) in 193/808-9 visited the pilgrimage site of Lady Zaynab (a) in Rawiya of Damascus.[1] After this date, there is another report in 500/1106-7 which mentions that a person from Aleppo built a mosque at the pilgrimage site for Lady Zaynab (a) in that year.

However, after the seventh/thirteenth century, a shrine and dome have been built at this location. Also, when Ibn Jubayr (d. 614/1217-8), the famous traveler of the Islamic world, traveled to Damascus, he passed by the Rawiya region and the current location of the shrine. In his report, he mentioned that the shrine belonged to Umm Kulthum, daughter of Imam Ali (a). However, there is a possibility that Ibn Jubayr meant the second daughter of Imam Ali (a), which is Zaynab al-Sughra, not Lady Zaynab (s) who is Zaynab al-Kubra.[2]

In his report, Ibn Jubayr mentions the existence of the shrine of Lady Zaynab (a) in the village of Rawiya, about six kilometers (a parasang) away from Damascus and says, "A large mosque is built there and there are houses outside it. There are also dedicated lands around it. People know these regions as the grave of Umm Kulthum." He finally mentions that he stayed there and visited the shrine of Lady Zaynab (a).

Its Locations and Description

Aerial view of the Holy Shrine of Lady Zaynab (a)

The holy shrine of Lady Zaynab (a) is located in the south of Damascus, in a region called al-Sayyida Zaynab (a). This region is part of Reef Damascus province. The shrine's building includes a great square-shaped courtyard and the tomb is located at its center, which has a dome and two tall minarets. The minarets and walls of the courtyard and inside areas are tiled by Iranian tile-work artists.

Interior view of the Holy Shrine of Lady Zaynab (a)

The ceiling and inside of the walls of the shrine have mirror works. The dome is gold-plated.

In the area of the shrine of Lady Zaynab (a) and the cemeteries around it, some Shi'a scholars and famous people are buried. For example, in the entrance corridor to the west courtyard, the graves of Sayyid Muhsin al-Amin al-'Amili and Sayyid Husayn Makki al-'Amili, the two Shia scholars from Syria are located. In the cemetery at the north of the shrine, the grave of Dr. Ali Shari'ati is there. Also, in another cemetery in the south of the shrine, the grave of Sayyid Mustafa Jamal al-Din, the contemporary Iraqi poet is located.

With the beginning of the crisis in Syria and increasing actions of Takfiri terrorist groups in this country after 2012, the shrine of Lady Zaynab (a) was many times hit by these groups' mortar and suicide attacks. Terrorist attacks from 2012 to 2015-6 led to damages to some parts of the shrine including the dome, courtyard, and main gates of the shrine. Some of these attacks happened in the surroundings of the shrine which led to the martyrdom of some visitors and residents around the shrine.

"Mudafi'an-i Haram" ("Defenders of the Shrine") An old photo of the Shrine that is taken in 1955