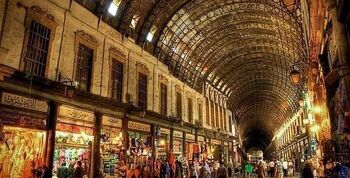 Bazaar of Damascus or al-Ḥamīdīyya Bazaar (Arabic: سوق الحمیدیّة) is a historical market in Damascus in which the captives of Karbala were passed through by the order of Yazid b. Mu'awiya. It is mentioned in the mourning ceremonies of the month of Muharram. It is the most important market of Damascus located in the old part of the city near Umayyad Great mosque.

Bazaar of Damascus is the most important market of Damascus located in the old part of the city. This market is about six hundred meters long, fifteen meters wide and eight meters high ending at Umayyad Great mosque.

Its present construction dates back to Uthmani period. Sultan Abd al-Hamid Uthmani constructed it in two floors in 1780 and then it became famous as al-Hamidiyya Bazaar. However, in some Persian books, the existence of Ahmadiyya school or Khanqah and also location of al-Hamidiyya mosque there is mentioned as the reason for naming it as al-Hamidiyya Bazaar. It is said that some ruins of the pillars of Jupiter Temple belonging to the time of Byzantine Empire still exist at the end of the bazaar. Bazaar of Damascus is among the sites usually visited by foreign pilgrims and tourists.

Passing the Captives of Karbala