It is recorded that he argued with the ruler of Mazandaran and moved to Baghdad[4] and began teaching and preaching there and became so popular that the caliph of his time gifted precious clothes to him.[5]

After a period of staying in Baghdad, he moved to Hillah in 567/1171-2 and began teaching there.[6] Ibn Idris al-Hilli and Ibn Bitriq learned hadiths from him while accompanying him in his travel to Hillah.

In 573/1177-8, Ibn Shahrashub went to Aleppo which was the refuge of Shi'a and Hamdanids. He stayed there until the end of his life.[7] 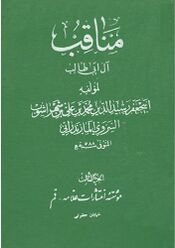 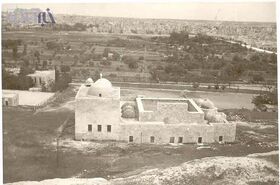 An old photo of Jabal al-Jawshan, the burial place of Ibn Shahrashub in Aleppo, 1962

About Ibn Shahrashub, al-Shaykh al-Hurr al-'Amili wrote, "he was a reliable scholar in hadith, rijal and literature, a poet and a collection of all good attributes."[11]

About him, Mirza Husayn Nuri says, "[He is] the honor of Shi'a, crown of religion, best of pioneers and a stormy deep sea with no bottom, the reviver of the works of virtue and merit, fruit of the nation and the religion, sun of Islam and Muslims, Ibn Shahrashub, the jurist, hadith scholar, researcher, …"[12]

Tafrishi wrote, "Muhammad b. 'Ali b. Shahrashub, the leader of Shi'a and their jurist, was an eloquent poet and a writer."[13]

Salah al-Din al-Safdi, a Sunni scholar, wrote, "Muhammad b. 'Ali b. Shahrashub …is one of the noble men of Shi'a. He memorized the Qur'an at the age of eight and reached the ultimate degree of knowledge in Usul. When al-Muqtafi, the Abbasid caliph was in Baghdad, Ibn Shahrashub excelled others in Quranic sciences, difficult issues of hadith studies, lexical knowledge, language syntax and giving speech on the pulpit."[14]

Ibn Shahrashub passed away in Aleppo in the eve of Friday 22nd of Sha'ban 588/September 2, 1192 and was buried on the top of the mountain called Jabal al-Jawshan.[15] Shi'a of Aleppo believe that it is the burial place of Muhsin al-Siqt, son of Imam al-Husayn (a) (Mashhad al-Siqt).