Error: no context parameter provided. Use {{other uses}} for "other uses" hatnotes. (help).

Ruqayya bt. al-Ḥusayn (Arabic: رُقَیَّة بنت الحُسَین), according to some reports, was one of the daughters of Imam al-Husayn (a) who was present at the tragedy of Karbala and was amongst the captives that was taken to Syria. According to these reports, it was during this captivity in Syria that led to her martyrdom at the tender age of three. Currently, there is a mausoleum for her in Damascus, Syria.

However, about this daughter of the Imam (a) differences exist concerning her name and the way she was martyred.

Name in the books of History

In mentioning the names of the children of Imam al-Husayn (a), al-Shaykh al-Mufid only mentions that he (a) had two daughters by the names of Fatima and Sukayna.[1] However, Muhammad b. Talha al-Shafi'i mentions that Imam al-Husayn (a) had four daughters and that Zaynab, Sukayna, and Fatima were the names of three of the daughters. He believed that this opinion was the generally accepted opinion and that the opinion of the two daughters was not the generally accepted opinion. As can be noticed, he did not bring a name for the fourth daughter,[2] so it should be sought in other books.

Najm al-Din Tabasi, by comparing the report of Ibn Funduq with the one found in Matalib al-sa'ul, comes to the conclusion that the name of Imam al-Husayn's (a) fourth daughter was Ruqayya and that her teknonym was Umm Kulthum.[4]

Another report that mentions the name of Ruqayya is that in some manuscripts of the book al-Luhuf, when Imam al-Husayn (a) bids farewell to his family members, he says the following, "O my sisters! O Umm Kulthum! O Zaynab! O Ruqayya! O Fatima! and O Rabab! Listen to me! When I am killed, do not hurt yourselves, do not scratch your faces and do not shout out profanities!"

Passing Away in the Ruins of Syria

Research has shown that the first book that mentioned a child passing away in Syria was Kamil-i baha'i. The book was written in Farsi by Hasan b. 'Ali al-Tabari (d. 700/1300);[5] the text he has written is as follows:

"It has come in al-Hawiya that the ladies from the Ahl al-Bayt (a), in the state of captivity, after all the men had been martyred in the Battle of Karbala; they hid the truth from their sons and daughters and every child was promised and told that your father had gone on a journey and will return. They were then taken to the palace of Yazid. A four-year-old daughter woke up from her sleep and said:'Where is my father Husayn? I saw him in my dream extremely worried!' The ladies and children started to cry and began to wail. Yazid was asleep. He awoke and started to investigate. He was brought news that such has happened. That accursed person said, 'Go! And take the head of her father and place it next to her.' The doomed guards took the head to her and placed it beside the four-year-old girl. She asked:'What is this?' the doomed guards replied: 'It is the head of your father.' That daughter began to tremble and let out a scream and became very ill, and in the following days passed away."[6]

This narration has some differences from what is commonly accepted about the demise of Ruqayya:

After Hasan b. 'Ali al-Tabari, Husayn Wa'idh Kashifi Sabizwari (d. 910/1504-5) in his book Rawdat al-shuhada' elaborates extensively on the narration of al-Tabari. However, he also fails to mention the name of the daughter; also mentions that she was four years old and states that this incident happened in the palace of Yazid. He adds the following:

"When she removed the cloth, she saw a head placed on that platter. She lifted it up and looked at it carefully. She recognized the head of her father. She let out a chilling scream, she rubbed her face upon his and kissed his lips, and while in that state, she left this world. [7]

This narration at the end states that the child passed away on that very night she saw her father's head. In essence, this is the main difference between this narration and the one of Hasan b. 'Ali al-Tabari and it is this narration that has been recorded in the books that followed.

After Husayn Wa'idh Kashifi, Fakhr al-Din al-Turayhi (d. 1087/1676-7) in his book al-Munthakhab describes this incident in a different manner. A part of the text found in al-Munthakhab is as follow:

Towards the end of the 13th/19th century, a person by the name of Muhammad Husayn Aarjistani in his book Anwar al-majalis, describes this story in a different way. He writes:

"The family of the Prophet (s) during those nights had no candle, no lamp, no water, no food, no carpet and no extra clothing; they just sat in sadness and kept themselves busy by grieving over the martyrs of Karbala. Until Lady Zubayda, the three-year-old daughter of Imam al-Husayn (a), one night cried intensely over her separation from her father...[9]

Research shows that this is the first report that mentions a name i.e. "Zubayda", for the child and states that the incident happened in the Ruins of Syria.

On the previous page, he indicates towards the ruins of Syria. He writes:

"I remember the loneliness in the Ruins of Syria. Were the family of the Holy Prophet (s) not alone in the Ruins of Syria? Were not Sukayna and Ruqayya the children of Husayn (a)? Why after all the troubles they had been through; from losing their father and brothers, did no one, out of sympathy, come to their assistance?"[10]

It is possible that the report found in this book laid the foundations for future books to mention a passing away of a child in the Ruins of Syria.

At the beginning of the 14th/20th century, Muhammad Jawad Yazdi wrote in his book Sha'sha'at al-Husayni the following:

"It has been narrated that a child of Imam al-Husayn (a) passed away in the prison of Syria after seeing the head of her father. However, there is a difference of opinion concerning her name i.e. was it Ruqayya, Zubaydah, Zaynab or Sukayna?[11]

In the pages that follow, he narrates from the book Riyad al-ahzan that the name of the child was Fatima.

In this report, many names, including that of Ruqayya, have been mentioned for the child who passed away in the Ruins of Syria.

A few years later a person by the name of Sayyid Muhammad Ali Shah 'Abd al-Azimi (d. 1334/1915-6) in his book al-Iqad clearly and emphatically states for the first time that the name of the child was Ruqayya and that she was three years old. He writes:

"Husayn (a) had a little daughter who he loved very much and she also loved the Imam (a) very much. It is said that her name was Ruqayya. She was three years old and was amongst the captives in Syria.[12] 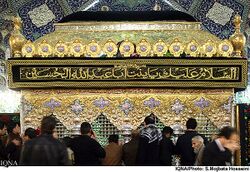 Darih of Ruqayya bt. al-Husayn (a)

The first report available about the current mausoleum attributed to Ruqayya dates back to the 10th/16th century. In his book Tasliyat al-majalis, Muhammad b. Abi Talib al-Ha'iri al-Karaki (alive at 955/1548-9) writes:

"In the city of Damascus, Syria, towards the eastern side of the Great Mosque of the city, I saw a ruin that used to previously be a mosuqe. Amongst those ruins I saw a stone that had the name of the Holy Prophet (s), his family and the names of the twelve Imams written on it. At the end it had the following sentence,'This is the grave of a princess, the daughter of Husayn b. Amir al-Mominin (a)'."

In the 13th/19th, al-Shiblanji in his book Nur al-absar, about this mausoleum, writes:

"Some of the people of Syria told me that there exist in Damascus, Syria, a mausoleum for Lady Ruqayya, the daughter of Imam 'Ali (may Allah illuminate his face), whose walls at that time had been damaged. The people of Syria wanted to remove the corpse from its grave so that they could rebuild and repair the mausoleum. However, because of the admiration and respect they had for her, no one had the courage to enter the grave until a person from the family of the Holy Prophet (s) by the name of Sayyid the son of Murtada entered the grave. He threw a piece of cloth over the grave and wrapped the body with the cloth and brought it out; everybody saw that it was a child who had not reached the age of maturity. I told this story to one of the great teachers; he also narrated the same story from a few of his teachers."[13]

In this report, the name of the owner of the grave i.e. Ruqayya bt. Ali is mentioned and it is the first report that indicates to the damage that the grave endured.

During the first part of the 14th/20th century, Muhammad Hashim Khurasani (d. 1352/1933-4), in his book- written in Farsi -Muntakhab al-tawarikh in addition to attributing the grave to Ruqayya bt. al-Husayn (a), goes into detail describing the damage done to the grave.[14]

Sayyid Muhsin Amin writes the following about this shrine:

"Ruqayya, the daughter of Imam al-Husayn (a) has a shrine attributed to her that is located in the al-Amarah District of Damascus. And Allah knows best. Mirza Ali Asghar Khan [Atabak, Amin al-Sultan], the supreme ruler of Iran rebuilt the tomb in 1323/1905-6.

It is not possible to give a concrete answer on the subject being researched. However, the miracles that have been seen and will be seen from this blessed place confirms that it does possess spiritual significance and that this place should be revered as it is a place that is attributed to the Ahl al-Bayt (a), even though the exact details concerning the demise of Ruqayya does not appear in any of the reliable sources. Mentioning her tragedy must be referenced to a reliable source so that the truth or inaccuracy of the story can be placed solely on the narrator's head.

Station within the Mourning Gatherings

Even though many historical differences still exist concerning her, amongst the people and during the mourning gatherings held in Muharram, Lady Ruqayya has a very elevated position. The third night of Muharram is dedicated specifically for her remembrance.[15] Many groups (Hay'a) of mourners are named after her. A large number of eulogies and poetry have been composed and recited in her honor. In some eulogies, those people who have denied her existence have been sarcastically and slyly reprimanded.