Zayd is the son of 'Ali b. al-Husayn (a), the fourth Imam of Shi'a Muslims. His mother's name was stated differently: Jayda, Jayd, Haydan, and Hawra' are the most famous ones. She was a bondwoman, who was bought by al-Mukhtar al-Thaqafi; she was respected highly by al-Mukhtar that he gave her as a gift to Imam al-Sajjad (a). Imam al-Sajjad (a) had other children except Zayd; 'Ali, 'Umar, and Khadija, from her.[3]

Abu l-Husayn was the teknonym of Zayd.[8] His titles were Zayd al-Shahid (Zayd the Martyr) because he was martyred in an uprising against tyranny; and Halif al-Qur'an (Ally of Qur'an)[9] because he was mostly engaged in reciting the Qur'an; and also Zayd al-Azyad (Zayd of the Zayds),[10] pointing to his great position compared to other people named Zayd.

Therefore, Zayd who did not believe in taqiyya along with fifteen thousand people of Kufa who took an oath of allegiance to him, to rise against Umayyad.[23] 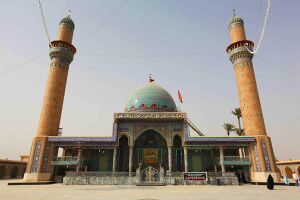 After the martyrdom of Imam al-Husayn (a), some of 'Alids considered armed uprising as a requirement of imamate and the strategy needed for opposing oppressors. After formation of this political thought at the time of Imam Zayn al-'Abidin (a), Zaydiyya began to emerge.[38]

The disagreement among 'Alids was based on the two views of cultural fighting or armed uprising against Umayyads. The result of this disagreement was seen after the martyrdom of Imam Zayn al-'Abidin (a), when some people accepted the imamate of Imam Muhammad al-Baqir (a) and others believed in the uprising by the sword which was led by Zayd b. Ali (a), brother of Imam Muhammad al-Baqir (a). The latter group were known as Zaydiyya.[39] This way, Shi'a who believed in armed uprising considered Zayd b. Ali as the fourth imam and al-Hasan al-Muthanna as the fifth imam.[40]