Al-Sayyida Nafīsa (Arabic: سيدة نفيسة) (b. 145/762 – d. 208/824)was the daughter of al-Hasan al-Anwar, the son of Zayd, son of Imam al-Hasan (a). She was buried in Cairo, Egypt. In historical books,she is well-known for her worship, asceticism, narrating hadith, generosity and memorizing Qur'an. She was married to Ishaq al-Mu'tamin, the son of Imam al-Sadiq (a). Al-Sayyida Nafisa mausoleum is among the most visited sites of Muslims, especially for the Egyptian Shi'a.

Al-Sayyida Nafisa was born on Rabi' I 11, 145/June 9, 762[1] in Mecca.[2] Hasan al-Anwar and Umm al-Walad were her parents. Al-Sayyida Nafisa was living with her father in Medina. Their house was on the west side of the city and opposite the house of Imam al-Sadiq (a).[3]

Ishaq al-Mu'tamin was famous for being pious, knowledgeable and reliable in narrating hadith. He witnessed Imam al-Kazim's (a) last will to his son, Imam al-Rida (a). Abu Muhammad was the kunya (Arabic teknonym) of Ishaq; because he was well-known for being trustworthy, he was called al-Mu'tamin. Ishaq was born and raised in Urayd(an area in Medina).[6] It's said al-Sayyida Nafisa and Ishaq al-Mu'tamin had two children named al-Qasim and Umm Kulthum.[7]

Al-Sayyida Nafisa moved to Egypt in 193 A.H/808-9. When people of Egypt heard of her arrival, they flocked to welcome her. It's said in Nasikh al-tawarikh: "She received great respect and high status while people asked her for blessing."[8]

For a while, al-Sayyida Nafisa and her father stayed in the house of Jamal al-Din b. 'Abd Allah b. Jassas, a businessman. After some time, they moved to the house of Umm Hani and then Abu al-Surayya Ayyub b. Sabir. The great number of people who came to visit al-Sayyida Nafisa made her feel that it may create some troubles for the owner of the house, so she decided to leave Egypt. However, people requested the governor of Egypt to prepare housing for her. Thus, he arranged to solve the problem by giving her a house in which she settled there forever.[9]

Immersed in Worship and Reciting Quran

Al-Sayyida Nafisa was highly attached to Quran.[10] According to most of the biographies, al-Sayyida Nafisa had memorized the holy Quran. Although some researchers mentioned her unfamiliarity with reading and writing[11], it's said she recited the whole Quran 1900 times[12]. It's also said she has passed away while reciting the verse:[13]

For them shall be the abode of peace near their Lord and he will be their guardian because of what they used to do. (Quran 6:127)

She has taken pilgrimage to Mecca thirty times[14]. She would shed tears in the fear of God.[15] It's also said that she has spent most of her nights in worship and fasted her days. Al-Sayyida Nafisa had dug a grave for herself with her own hands, and has prayed a great deal and recited the Quran many times there.[16]

Many biography and history writers that have penned about al-Sayyida Nafisa, mentioned her virtuousness, worship, knowledge and practicing God's orders. Here are some examples of the quotations:

According to the references, some of the great scientific figures have learned a great deal from al-Sayyida Nafisa including:

Biography resources and other different books have mentioned some extraordinary acts performed by al-Sayyida Nafisa[21], including curing the ill and saving Egyptians and the Neil River from drought[22].

Al-Sayyida Nafisa became ill in 208/824. On Ramadan/January her illness got worse. It's said she has passed away while reciting the holy Quran.[23]

During the time of her illness Ishaq al-Mu'tamin, her husband, was in Medina and he was informed by a letter. When he arrived there, al-Sayyida Nafisa has already passed away and the burial ceremony was going to start. Ishaq has intended to take her body to Medina, but Egyptians insisted on burying her there. They asked the governor to request Ishaq not to do so. Ishaq didn't accept it. They also collected a great deal of money and wealth to dissuade him. After Ishaq refused their request again, he had a dream in which Prophet Muhammad (s) told him "return their wealth and bury her near them."[24] 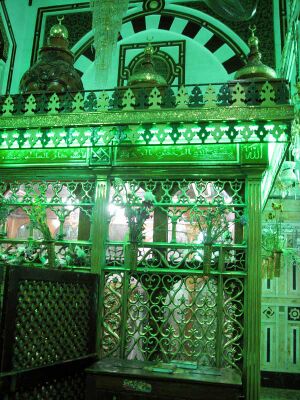 Al-Sayyida Nafisa was buried in her house and now her tomb is there. Her husband wanted to take her body to Medina; but the Egyptians asked him to bury her in Egypt so that they can make tawassul.[25]

The shrine of al-Sayyida Khatun is among the most visited sites in Egypt. Today her Mausoleum is a place of pilgrimage for people, especially on Sundays and Thursdays. It is also a custom to hold wedding ceremonies near there. Each year on the birth anniversary of al-Sayyida Nafisa and Lady Zaynab (a) ceremonies are held in Egypt. The first ceremony was held in 889 A.H/1484-5 in the time of al-Ashraf Sayf al-Din Qa'ytabay; he was a Burji Mamluk Sultan of Egypt from 872 A.H/1467-8 to 901 A.H/1495-6. On these ceremonies, a large number of people gather around her burial site, and the celebration of different sects of Sunni and Shi'a Muslim continue to early morning. Requesting for blessing and circumambulating the bride in the shrine are the local costumes of Egyptians.[26]

In Qajar era, some Iranian Shi'a Muslims traveled to Syria and Egypt and visited al-Sayyida Nafisa mausoleum, in the time of Hajj. Some Iranian Hajj travel accounts gave reports and information on these travels, her mausoleum and Egyptians' beliefs about her.[27]

It's been narrated that in the past when people visited al-Sayyida Nafisa mausoleum, they read a ziyarah which was written in Durar al-Asdaf. Here is a part of it:

Peace, salutation and reverence of Almighty and Beneficent God upon al-Sayyida Nafisa, the descendant of Prophet Muhammad (s), the mercy and guidance to all people … award us what we need in this world and in the Hereafter, O Lord of the worlds.[29]