ʿAlī b. al-Imām Muḥammad al-Bāqir (Arabic: علي بن الإمام محمد الباقر) (d. 116/734) is an immediate son of Imam al-Baqir (a). In the relevant sources, he is usually mentioned as "Sulṭān ʿAlī" (سلطان علي). According to some historical accounts, he immigrated to Kashan in 113/731 upon the request of the lovers of Ahl al-Bayt (a) in "Chihil Hisaran" and "Fin" in Kashan. He was a religious leader of people there for three years. In 116/734, he and some other people were martyred by governmental forces. His corpse was buried in Mashhad Ardahal. The ceremony of carpet washing is performed every year on the second Friday of the month of Mihr (solar calendar) as the commemoration of his martyrdom, together with mourning ceremonies in Mashhad Ardahal.

'Ali b. al-Imam Muhamamd al-Baqir (a) is the son of Imam al-Baqir (a). Al-Shaykh al-Mufid reported that Imam al-Baqir had seven children. According to him, Abu 'Abd Allah Ja'far b. Muhammad and 'Abd Allah were sons of Umm Farwa bt. al-Qasim b. Muhammad b. Abi Bakr, and Ibrahim and 'Ubayd Allah were sons of Umm Hakim both of him died during the life of their father. 'Ali and Zaynab were children of Umm Walad, and Umm Salama was also reported to be the daughter of Umm Walad.

According to Mus'ab al-Zubayri, 'Ali b. Muhammad had a daughter called Fatima whose mother was Umm Walad. Imam Musa b. Ja'far (a) married this girl.

He had a son called Ahmad b. 'Ali b. al-Baqir (a). His mausoleum is located in Isfahan, in gardens on the way to the Khaju district.

According to the author of Riyad al-'ulama, "the great sayyid, 'Ali b. al-Imam al-Baqir (a), was one of the prominent, senior children of Imam al-Baqir (a). His place [among Shiites] is too well-known to need comments. His mausoleum is located around Kashan, known as "Mashhad Barkurs". It has a huge dome. Some Shiite scholars mentioned his virtues and his karamat (supernatural wonders)".

Request for a Missionary

Some lovers of Ahl al-Bayt (a) from Chihil Hisaran and Fin around Kashan wrote a letter to Imam al-Baqir (a) and asked him to send one of his sons to them as a missionary and a preacher in order to teach them the Islamic rulings.

Imam al-Baqir (a) sent to them his son, 'Ali b. Muhammad (a) together with some other people. Their travel funds and equipment were provided by his brother, Imam al-Sadiq (a).

Being Welcomed by People

It is reported that when he arrived in Kashan, he was welcomed in Fin by about 6000 people. He started preaching people in Jasb and Khawa for a while. He was mostly engaged with worships in the Jami' Mosque of Kashan—now located in the old square (Maydan Kuhna) of the city. Shiites went to him for Friday prayers and saw karamat (supernatural wonders) from him.

'Ali b. Muhammad sent letters from Kashan to his father, Imam al-Baqir (a), in Medina, reporting his own conditions and those of the Shiites in Kashan. In 116/734 the news of 'Ali's martyrdom was received.

After around 3 years from Imam al-Baqir's (a) martyrdom, the enemies martyred 'Ali b. Muhammad together with some of his companions and friends.

Since Jumada II 27, 116/August 7, 734 is believed to coincide with Mihr 17, 113 S.H., the annual rituals of carpet washing, together with mourning ceremonies, are held on the second Friday of the month of Mihr in his mausoleum. 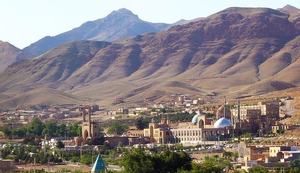 The village of Mashhad Ardahal 40 kilometers west of Kashan

There are disputes over the place where he was buried. Some people take it to be Mashhad Ardahal (also known as Mashhad Qali), 40 kilometers west of Kashan (on the Kashan-Delijan way). The title, "Mashhad" (place of martyrdom) has long been used for his mausoleum; for example, the book, Naqḍ, called his mausoleum "Mashhad". According to some scholars, there is no doubt about the lineage of the person buried in this place.

In the period of Saljuqis, this mausoleum was already completely constructed. Sayyid Abu l-Rida Fadl Allah al-Rawandi composed many poems about the mausoleum and its builders.

It is reported that when 'Ali b. al-Imam Muhammad al-Baqir (a) opened his eyes in the last moments of his life, he found himself near "Khaja Malik Shah" and said:

"O' my friend! I have some wills; you have to execute them.

There are some karamat (supernatural wonders) reported about 'Ali b. al-Imam Muhammad al-Baqir (a), such as the following:

There is a cellar in the shrine of Sultan 'Ali which is 6 meters long, 3 meters wide and 3.5 meters high. Much has been said about the cellar and coffins inside it. For example, it is said that "in 1313 S.H. (1934), I'tidad al-Dawla, the governor of Qom, went to Mashhad Ardahal (which was then a suburb of Qom) and ordered that the cellar be opened. He himself went inside and saw about 100 corpses all of which were healthy and intact with clothes on them and dried blood on faces of some of them. He took them to be the companions of Sultan 'Ali (a)".

In 1341 S.H. (1962), Ayatollah Mar'ashi Najafi visited the cellar. He is reported as saying that: "on the eastern side of the cellar, there were more than a hundred coffins in different sizes and colors in three rows placed on one another. Parts of the planks of some of the coffins were broken and inside each coffin, there was a corpse with clothes, uncovered face, and messy hair such that it would collapse like a powder if hit by something. In the back of the cellar, under the storage, there was a stone tablet which read "Sayyid Rukn al-Din Mas'ud" with the date 954 A.H. (1547)". 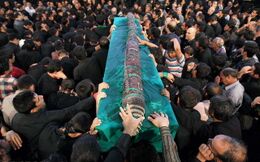 In the courtyard, people of Fin with wooden sticks, are given a carpet of the shrine

For many years, the carpet washing ceremony has been held on the second Friday of Mihr (the closest Friday to Mihr 17) every year as a commemoration of Sultan 'Ali b. Muhammad together with mourning ceremonies in Mashhad Ardahal. Although its form might have changed a little, it is a very old religious tradition in the city.

A few days before the Friday (especially the night before the ceremony), a large population of young and old men and women congregate in the place. In the morning, many people from Fin gather around a water spring near the shrine (the place where the carpet would be washed) with wooden sticks in their hands, and then they head towards the shrine chanting "Ya Husayn". Together with other people and some religious figures and scholars, they start the ceremony with reciting some verses of the Quran.

People then start to mourn and after some minutes, people of Fin, with wooden sticks in their hands, are given a carpet of the shrine by one of the shrine's servants. They roll the carpet, put it on their shoulder, and with the help of their sticks, take it out of the courtyard. They take the carpet to the water spring located 800 meters of the shrine while some people ahead of them carry flags chanting "Ya Husayn". This is a symbol of carrying the corpse of Sultan 'Ali b. Muhammad. After a short mourning, the ceremony ends. In this ceremony, thousands of people accompany people of Fin while chanting.