From wikishia
For other people named Ruqayya, see Ruqayya (disambiguation).

Ruqayya bt. ʿAlī (Arabic: رُقَيَّة بنت علي) (alive in 61/680-1), was the daughter of Imam 'Ali (a). She married Muslim b. Aqil. She was on the way to Kufa with Imam al-Husayn (a) when she received the news of the martyrdom of her husband. Also, her son Abd Allah was martyred in the event of Karbala. She was one of the captives of Karbala. 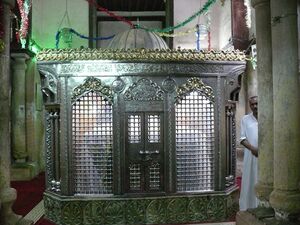 The darih of the grave attributed to Ruqayya, the daughter of Imam ' Ali (a), was set up in 1416/1995-6 and is different with respect to artistic decorations from other silver darihs. The darih is approximately rectangular, and its angles have respectively three or four netlike windows. On top of the darih, there is a small dome, and on top of the angles of its sides, there are muqarnases like the ones in the corners of the minaret of the Mosque of Kufa (which is an imitation from the ones in Masjid al-Aqmar). Green carved marble stones make the base of the darih. The silver darih of the mausoleum of Ruqayya was designed by Dawudi Buhras of India, and it replaced the old copper darih.[10]