From wikishia
This article is about Khawla bt. Imam al-Husayn (a). For other people named Khawla, see Khawla (disambiguation). 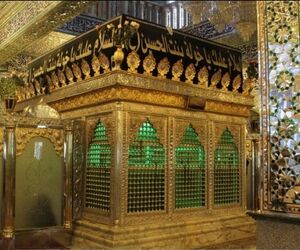 Darih of Khawla bt. al-Husayn (a)

Historical sources have not mentioned that Imam al-Husayn (a) had a daughter called Khawla, but people of Baalbek believe that when the caravan of captives of Karbala passed Baalbek on their way toward Syria on Muharram 28, 61/October 28,680, a small daughter of Imam al-Husayn (a) passed away and was buried there.

According to a painting of the English tourist Robert Wood, a tomb existed there in 1757. In next years, this tomb was destroyed due to earthquake or invasion of Ottomans and was forgotten for years. As it is famous among the people of Baalbek, a person had a dream and the tomb of Khawla was revealed to them. In 1970, a husayniyya and a mosque were built beside the tomb of Khawla by financial aids of the people of Baalbek. In 1997, Hezbollah of Lebanon began the expansion of the tomb, but it had a slow progress due to lack of facilities.

As it is written above the entrance of the shrine, an expansion and decoration of the shrine was finished in 1416/1995-6 by the financial supports of Iran.

During the mourning time for Imam al-Husayn (a), the shrine of Khawla is covered with black fabric and people of the region gather there for mourning. On May 12, 2013, media outlets gave a news about an extraordinary event in the shrine. They reported that during the mourning ceremony being held in this shrine, a blood-like liquid poured down the darih and the walls attached to the darih in the shrine.