Muḥammad Mahdī Shams al-Dīn (Arabic:محمد مهدی شمس الدین) (b. 1354/1936 – d. 1421/2001) was a religious scholar, political theoretician and the chairman of the Supreme Islamic Shi'a Council in Lebanon. He began his scientific and political activities in Najaf under Al-Sayyid Muhsin al-Hakim and Ayatullah al-Khoei. The cooperation with al-Sayyid Muhammad Baqir al-Sadr and Muhammad Husayn Fadl Allah in founding al-Da'wa Party and the al-Adwa' magazine was among his most important political activities. In 1395/1975, Shams al-Din accepted the deputyship of the Supreme Islamic Shi'a Council whose director was Imam Musa al-Sadr. After Imam Musa al-Sadr disappeared in 1398/1978, Muhammad Mahdi Shams al-Din accepted the chairman position of this Council and in 1414/1993, he was officially elected as the director of the Supreme Islamic Shi'a Council in Lebanon.

After the Islamic revolution was successful in Iran, although he supported it, he insisted on the independent identity of the Shi'a in Lebanon.

Shams al-Din's father, 'Abd al-Karim, was among the scholars of Lebanon who educated and taught in Najaf for years. Muhammad Mahdi lived 33 years of his life in Iraq when he had cultural, social and political activities before al-Sayyid Muhsin al-Hakim and Sayyid Abu l-Qasim al-Khoei in addition to learning religious sciences.

In 1377/1957, he assisted al-Sayyid Muhammad Baqir al-Sadr in the establishment of Hizb al-Da'wa. Many Lebanese students who studied in the Seminary of Najaf joined this party under the influence of Shams al-Din and his compatriot al-Sayyid Muhammad Husayn Fadl Allah and after their return to Lebanon, most of them became the founder of political activities especially Hezbollah.

In 1389/1969, Shams al-Din returned to Lebanon and became the director of the cultural charity society which was established in 1386/1966. He was busy with cultural, intellectual and propagation activities until 1395/1975. In 1374/1954, Shams al-Din wrote the book Nizam al-hukm wa l-idara fi l-Islam to answer the secular movement and specifically to the book of 'Abd al-Razzaq (al-Islam wa usul al-hukm ) which was published twenty years before. He has mentioned his goal of writing the book as proving the existence of a model and system of government in Islam and rejection of separation between Islam and state.

After the victory of the Islamic revolution in Iran, regardless of supporting the revolution and its leadership, Shams al-Din insisted on the identity independence of the Shi'a of Lebanon and regarding the tribal and religious variety in Lebanon, prohibited political Shi'a forces from imitating and repeating the experience of the Islamic republic in Lebanon.

Establishment of Hezbollah in 1402/1982 which led to division of some Iran-oriented Islamist members of Amal movement and especially bloody fights between the two groups in 1409/1988 and 1410/1989 had great influences on the thought and political manner of Shams al-Din.

Shams al-Din was deeply devoted to Amal movement which was somehow a non-ideological, moderate and nationalist organization; so, he was not happy with Iran's support of Hezbollah which sought a political-revolutionary transnational project and also the separation of Amal movement. Following the fights between Hezbollah and Amal, Shams al-Din proposed the theory of Wilaya of Umma upon themselves against the theory of Wilaya of Fqih. After proposing his theory, he changed his mind regarding his negative position he had proposed about the democracy he mentioned in his book Nizam al-hukm wa l-idara fi l-Islam and in the preface of the new edition of the book in 1411/1990, he declared that in the first edition, he believed in the opposition of democracy with Islam but now he believes that during the Occultation of the Infallible Imam (a), democracy is the criterion of validity of the political system and exertion of people's will is based on the existence of democratic mechanisms.

In his different travels to Arab countries in late 1410s/1990s, Shams al-Din called Arab Shi'a to mix with their Arab societies and moreover, made efforts to bring peace between Arab political governments and their opposition Islamist movements.

He supported the fatwa of the Supreme Leader of the Islamic Revolution in prohibition of Qame-zani.

In addition to articles, speeches and Friday prayer speeches, there are some works left from him including the following: 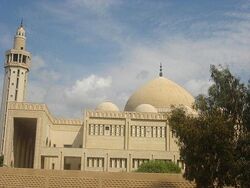 Imam Sadiq (a) Mosque in Beirut built by Muhammad Mahdi Shams al-Din where he was buried.

He passed away on Shawwal 14, 1421/January 10, 2001 at the age of 67 and was buried in the mosque of Imam al-Sadiq (a) which he himself had established in Beirut. His grave is at the end of the entrance hall of the mosque.