Muḥammad b. al-Ḥasan b. ʿAlī b. al-Ḥusayn al-ʿĀmilī (Arabic: محمد بن الحسن بن علي بن الحسين العاملي) (b.1033/1624 – d.1104/1693), commonly known as Al-Ḥurr al-ʿĀmilī and Ṣāḥib al-Wasāʾil, was a prominent Twelver Shi'a muhaddith, jurist and the author of Wasa'il al-Shi'a. He was an Akhbari scholar who believed in the authenticity of all hadiths in the Four Books. He is buried in the holy shrine of Imam al-Rida (a).

He was born on Friday, Rajab 8, 1033/April 26, 1624 in the village of Mashghara in the Jabal 'Amel area of southern Lebanon, a Shi'a center in the region. His lineage traces back to Hurr b. Yazid al-Riyahi through 36 generations.[1] His family is known as Al Hurr (descendants of Hurr).[2]

As al-Shaykh al-Hurr al-Amili himself has stated, the family of Al Hurr was famous for being knowledgeable and supporting Ahl al-Bayt (a); they have also trained several notable jurist and scholars.

Al-Shaykh al-Hurr al-'Amili's father, Hasan b. 'Ali, was a notable scholar, literary figure, jurist and a knowledgeable figure in Arabic literature. People mostly visited him as a source of knowledge in Islam.[3] His mother was the daughter of 'Allama Shaykh 'Abd al-Salam; she was a pious woman who was knowledgeable in literature.[4]

His uncle, al-shaykh Muhammad b. 'Ali b. Muhammad al-Hurr al-'Amili, was the author of al-Rihla. He penned numerous glosses, commentaries, treaties and collections of poems.[5]

His cousin, Hasan b. Muhammad b. 'Ali, was a notable scholar and a literary figure. His grandfather, al-Shaykh 'Ali b. Muhammad al-Hurr al-Amili, was a prominent scholar who was famous for his worship and his knowledge in shari'a laws. In addition, his son, al-Shaykh Muhammad b. Muhammad, was the superior figure of his time in logics.[6]

When he was forty years old, al-Shaykh al-Hurr al-'Amili moved from Jabal Amel to Iraq to make a pilgrimage of the holy shrines in 1073/1662-3. Then he moved to Mashhad to visit the shrine of Imam al-Rida (a) where he remained for the rest of his life.

Al-Hurr al-'Amili performed hajj twice in 1087/1677 and 1088/1678. In his last travel to Mecca, al-Shaykh was saved from the attacks of Ottomans. The Turks of Ottomans attacked Iranians and killed them all. Their excuse was that Iranians had disrespected Ka'ba. Al-Shaykh al-Hurr al-'Amili managed to escape the incident by the help of Sayyid Musa b. Sulayman, who was one of the lords of Mecca and a descendant of Imam al-Husayn (a). Then he moved to Iraq through Yemen.[8]

On his journey to Mashhad, he visited 'Allama al-Majlisi in Isfahan, and the two mutually granted each other the permission for the transmission of hadiths. In a meeting with Shah Sulayman Safavi, he received the titles of Qadi l-qudat (The judge of all judges) and Shaykh al-Islam of Khurasan.[9]

Al-'Amili was an Akhbari scholar. He believed that all the narrations of the Four Books are reliable. He brought twenty reasons in proving his claim, in the last section of the book al-Wa'il al-Shi'a.[12] In addition, he believed that we cannot act based on doubt, because of the possibility of achieving knowledge on Shari'a laws.[13]

He attended the classes of famous Akhbari scholars. Therefore, while he was under the influence of Akhbarism in Safavid era, eventually he accepted Akhbarism and became a moderate preacher of this school to expand it. However, he avoided disputes against the followers of Usul and Mujtahids, but he defended and supported Akhbarism strongly, while he tried his best to make it more dominant. He was among the first people who tried to explicitly make a distinction between Akhbari and Ijtihadi schools of thought. He fiercely criticized logical means in concluding Shari'a laws.[14] Al-'Amili explained his ideas and attitudes in his famous book, Fawa'id al-Tusiyya. In the beginning part of his book, al-'Amili explained his motivations in writing this book.[15] 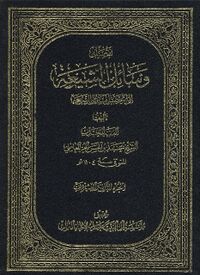 Al-Hurr al-'Amili had an exceptional talent for composing poems. He has written numerous poems praising Ahl al-Bayt (a). His Divan contains 20000 verses of poems.

Although I'm named Hurr (free), I'm a servant of Ahl al-Bayt (a)

Also in another poem, he said:

If remembering friends is enjoyable, praising Ahl al-Bayt is more delightful to me.[17]

Al-Shaykh Muhammad b. al-Hasan b. 'Ali b. Muhammad al-Hurr al-Shami al-'Amili was a grand scientific figure. The universal influence of his works has significantly affected different people of different countries. His writings are regarded as stars in the sky of knowledge while his words are valuable pearls next to each other.[18]

Muhammad b. 'Ali Ardibili described al-Hurr al-'Amili as a significant figure whose virtues are ineffable and countless.[19]

Muhammad b. al-Hasan b. 'Ali Mushghiri, is the greatest narrator, virtuous scholar, knowledgeable faqih, reliable narrator, and a source of knowledge who has written significant works.[20]

'Allama Amini said about al-Hurr al-'Amili in al-Ghadir: He was the precious pearl of the time and a shining figure in the world of virtuousness. He was a knowledgeable man in every subject; he was an ultimate symbol of knowledge, graciousness, and excellence. He has written hadiths of Ahl al-Bayt (a) in proving Imamat, collecting Shari'a laws and praising them. Therefore, he has carved his name forever by his impressive works.[21]