His full name is Hashim b. Sulayman b. Isma'il al-Husayni al-Tubili. He is a descendant of al-Sayyid al-Murtada 'Alam al-Huda and through him, the family tree of al-'Allama al-Bahrani reaches to Imam al-Kazim (a). Al-'Allama al-Bahrani born in "Gatkan", a village of Tubli, the capital of Bahrain in the time. His year of birth was about 1050/1640-1.

There isn't any information about his education. Also there is no information about his teachers, among them just some of scholars who gave him permission to transmit hadith are known. It seems that he had most of his education in his native land, and had some travels to Najaf and Mashhad. In Mashhad he went to 'Abd al-'Azim b. 'Abbas Astarabadi the Akhbari scholar and one of students of Baha' al-Din al-'Amili and obtained a permission to transmit hadith from him, according to his book, this was before 1074/1663-4. In his travel to Najaf he obtained a permission to transmit hadith from Shaykh Fakhr al-Din al-Turayhi al-Rammahi. According to his book al-Burhan his chain of masters (mashyikh) reaches to al-Shaykh al-Kulayni, al-Shaykh al-Saduq and al-Shaykh al-Tusi.

He had a special social status and after the demise of the great religious authority of the time, Muhammad b. Majid al-Mahuzi, he gained the religious authority of Bahrain in addition to writing and teaching. Al-Bahrani was a judge and in charge of hisbiyya affairs and was managing social matters and pursuing issues of oppressed people. His confrontation the kings of Bahrain and his fight with injustice and plunder and his resistance on enjoining the good and forbidding the evil made him very popular.

According to his works, he belongs to Akhbari School. His emphasis on learning all of religious knowledge from Ahl al-Bayt (a) in the al-Burhan indicates his point of view.

Al-Bahrani had been teaching until his demise. His effort in collecting the old hadith books is rare among Shi'a scholars, Yusuf al-Bahrani considers only al-'Allama al-Majlisi higher than him in this point, although unlike al-Majlisi, al-Bahrani was only collecting and transmitting hadith without any explanation or comment. Because of his numerous books (75 books according to Afandi Isfahani) and his vast information in various fields of religious knowledge, he is famous as al-'Allama al-Bahrani.

Despite his numerous books and his social status as a marja', there’s not any fatwa book or definitive jurist opinion in his books. This point made some to think that his fiqh knowledge, as the most important Islamic science, was little; but on the contrary, some believe that he refused to write a manual of Islamic law because of his god-wariness and instead, he reported other's fatwas in his books and when answering an istifta'; as this manner is precedent in the history of Shi'a jurist. 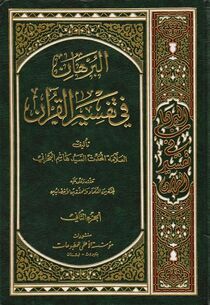 Al-'Allama al-Bahrani has many books, which number is said to be up to 75, but his published books are as follows:

Also his two sons 'Isa and Muhsin were scholars.