Āqā Muḥammad Bīdābādī (Persian: آقا محمد بیدآبادی) (b.? - d. 1197/1783 or 1198/1783-84), son of Muhammad Rafi' Gilani was a philosopher, mystic, and theologian of 12/18 century. He was famous mostly because of his piety, spiritual journey and teaching Mulla Sadra's transcendental philosophy. He had great students such as Mulla 'Ali Nuri, Haj Ibrahim Karbasi, Sayyid Husayn Qazwini, Mirza Abu l-Qasim Qummi (Mirza Qummi). His tomb is in Takht-i Fulad Cemetery in Isfahan.

His father, Mulla Muhammad Rafi' was from Zahidan and a mujtahid in Gilan and Mazandaran provinces. He went to Isfahan and settled in Bidabad neighborhood. Aqa Muhammad was born there.

His teacher in hadith and tradition was Muhammad Taqi 'Almasi (d. 1159/1746) who was a grandchild of Mulla Muhamamd Taqi al-Majlisi and had a permission from him for narrating hadiths. He learned philosophy from Mulla Isma'il Khwaju'i Mazandarani (d. 1173/1759-60).

Beside the philosophy of Mulla Sadra, Bidabadi also taught illuminist (Ishraqi) and peripatetic (Mashsha'i) philosophies as well. Mulla Sadra's philosophy was not yet widespread at his time. It was later widely taught by his student, Mulla 'Ali Nuri.

Morteza Motahhari wrote in this regard:

"Originally, the importance of Bidabadi's teaching was in transferring philosophical heritage of Mulla Sadra to the generation after himself; since Mulla Sadra's views and their significance were not known for a long time after him and it was introduced appropriately by Mulla 'Ali Nuri, the famous student of Bidabadi. Thus, Bidabadi can be considered as the reviver and promoter of Mulla Sadra's philosophy."

In fiqh, Bidabadi believed in obligation of Friday prayer in the Age of Occultation of Imam al-Mahdi (a). Khwansari considered Bidabadi among opponents of the theory of ijtihad and an advocate of Akhbari theory.

It is famous that Bidabadi also knew the knowledge of kimiya, in which a treatise is attributed to him and some stories are narrated about him.

He was very famous in piety and mystical spirituality. Many stories are narrated about him such as that in appearance and way of living, he did not care about common conventions. Bidabadi disregarded the special attention of the government to him and rejected the gifts they sent him. He practiced ascesis and was contented in his life. He used to do farming and weaving fabrics to make a living. During the drought of Isfahan, he only ate raw parsnip for six months to show sympathy to the starving.

In some references, Bidabadi is mentioned as a follower of Qutb al-Din Nayrizi (d. 1173/1760) a leader of Dhahabiya mystical chain. Nayrizi himself is regarded a follower of Mulla Sadra's school.

That he is considered a follower of Nayrizi shows his position as a link in connecting different mystical chains to Nayrizi, the same way Sadr al-Din Kashif Dizfuli is linked to Nayrizi's school through Bidabadi. Sayyid 'Ali Shushtari, a great spiritual leader in Najaf Seminary associated with Sadr al-Din Kashif Dizfuli and this way, Mulla Husayn Quli Hamadani and his students are indebted to Bidabadi's teaching in their certain spiritual tradition. Another recent branch of teachers of mysticism and ethics reaches Mirza 'Abd al-Jawad Shirazi who is considered a student of Bidabadi by some scholars. Also, the mystical chain of some religious mystics of Najaf and Karbala such as al-Sayyid Ahmad al-Karbala'i, al-Sayyid Murtada al-Kashmiri, Mulla Fath Ali al-Sultanabadi and al-Sayyid Mahdi Bahr al-'Ulum is considered to reach to Bidabadi.

Bidabadi can be considered a soul-knower theosopher since his advice has been that human being must know himself and any issue is worthless of considering even though very attractive.

Bidabadi's mystical approach was based on considering both the appearance and the heart (exterior and the interior) and honoring religion, spiritual practice and the truth meaning that human being must observe apparent rulings of religion, but should not suffice to their appearance and make a great effort to achieve their secret. In his opinion, the path of happiness is through following the speech, action, and disposition of the friends of God. Therefore, he advised against sufficing to Islam in speech and talking of unity only by tongue and about levels of believing unity of God, says, "One must observe God so that God observes him."

In his letters and pieces of advice for his students and those who asked him for advice, he advises them against material concerns and calls them to spirituality and awareness. In his opinion, ignorance is blindness and spiritual death. One of his advices is to strive to achieve a willing death; since it removes the veils in front of human beings' eyes and a spiritual wayfarer needs to die willfully before the natural death so that he wakes up for eternity.

Constant observation of nawafil and certain dhikrs are the most important program of the forty day course (called "Arba'in") Bidabadi advised observing some Arba'in under the supervision of a teacher. He says that according to hadiths from the Prophet (s) and Imams (a), the fruit of this spiritual practice is revival of the heart and flowing the spring of wisdom from the heart to the tongue and this way the knowledge of general issues is achieved.

Aqa Muhammad Bidabadi educated many students. Most important students of Bidabadi are:

Bidabadi wrote some other letters to his students and other scholars in Persian and Arabic containing spiritual instructions. 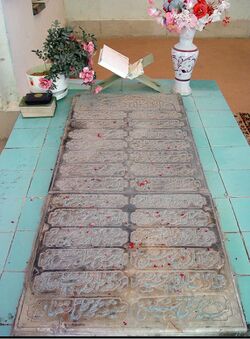 The gravestone of Aqa Muhammad Bidabadi in Takht-i Fulad Cemetery in Isfahan.

Khwansari and Muhammad Hasan Zunuzi have reported his demise in 1197/1783, but Maftun Danbali who reports his meeting with Bidabadi and reports about hearing the news of his demise reports Bidabadi's demise in 1198/1784 and the teacher of Habibabadi has mentioned the same date according to a written document.

His tomb is in Takht-i Fulad Cemetery in Isfahan near his father's grave.