There are no written works left from al-Haddad except few letters and his ideas and states are expressed in the book Ruh-i mujarrad written by Sayyid Muhammad Husayn Husayni Tihrani. Al-Haddad made a living of a farrier. He loved poems of Shams Maghribi, Hafiz and Rumi.

His beliefs in wahdat al-wujud (The unity of being), his love of Muhyi l-Din b. al-'Arabi's words, reciting Rumi's Mathnawi, his mystic inclinations, etc. made some people criticize him. He answered these criticisms.

His grandfather was an Indian Shi'a who was captured in a tribal fight. He was sold to a Shi'a family who took him with them when they moved to Karbala and freed him. He became a waterer in Karbala and gave water to pilgrims and married there. The eldest of the three children left from one of his sons was al-Sayyid Hashim al-Haddad who was born in Karbala in 1318/1901.

Al-Sayyid Hashim began his education in Karbala and went to Najaf to continue his education. He took a room in the Hindi seminary and there he found al-Sayyid 'Ali al-Qadi al-Tabataba'i and associated with him for 28 years in Karbala and Najaf. Although, al-Qadi had pupils such as Muhammad Taqi Amuli and Sayyid Muhammad Husayn Tabataba'i, but al-Haddad was one of his favorite pupils. It can be guessed that the reason has been al-Haddad's self-dispossession of worldly matters. Sayyid 'Abd al-Husayn Dastgheib, Sayyid 'Abd al-Karim Radawi Kashmiri, Sayyid Mustafa Khomeini. Morteza Motahhari and Sayyid Ahmad Fihri Zanjani were among his pupils, but Sayyid Muhammad Husayn Husayni Tihrani was his most notable pupil who associated with him for 28 years and later wrote a memorial book about al-Haddad's life and spiritual conduct titled as Ruh-i mujarrad (1418/1998) which was translated into English by Tawus Raja entitled "Liberated Soul"[1].

Al-Haddad made a living of a horseshoer and a farrier; therefore, he was famous as Na'lband, but later changed his title and thus family name as al-Haddad. Although, he lived a poor life, he never asked anyone anything and even would share whatever he had with the needy.

He did not write any books or treatises. There are only some letters left from him which include mystical issues and spiritual instructions. Sayyid Muhammad Husayn Tihrani has narrated his opinions.

Al-Haddad was very profound regarding Unity of God and fana' (Arabic:فَناء) (annihilating the self and realizing God) was the most frequent word in his speaking. He believed that paying too much attention to the correction of an action's form causes ignorance about the truth and worshiping both an action's form and the truth. In his opinion, wahdat al-wujud (unity of being) is among the greatest concepts which no one understands it as it deserves to be understood and to al-Haddad it meant that nothing but God has independent existence-for-itself, i.e. true existence is He Himself and other beings are mere dependence and need to the Truth.

Manifestation of Truth in Karbala 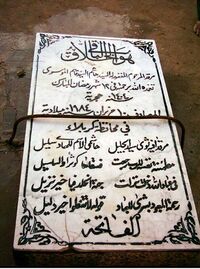 His grave in Wadi l-Safa cemetery

Al-Haddad knew martyrdom of Imam al-Husayn (a) as the greatest manifestation of love, most beautiful manifestation of glory and beauty and the attributes of divine mercy and wrath. In his opinion, if a spiritual wayfarer is shown a little from divine manifestations in 'Ashura, he will go unconscious forever. His look at the martyrdom of Imam al-Husayn (a) was similar to Rumi's mystical description of 'Ashura in Mathnawi.[2] Although, he had accepted some of Ibn al-'Arabi's ideas, he criticized him as well.

'Allama Tihrani considered al-Haddad perfect in mysticism, but some religious scholars criticized him, most importantly about his opinion on God's unity of being, quoting from Ibn al-'Arabi, reading Rumi's Mathnawi and his mystical inclinations. Al-Haddad however, answered these criticisms.