In mysticism, he followed Husayn Quli Hamadani, his teacher. He believed that it is impossible for travelers upon the path [towards God] to reach the abode of unity without accepting guardianship of Imams and Fatima al-Zahra (a). His method of mystical instruction included fulfillment of recommended practices (mustahabbat), visitation of holy tombs, entreating Imam al-Husayn (a) (tawassul), and having a teacher. He recommended Risala siyr wa suluk by Bahr al-'Ulum as the best mystical book, and Ihraq (burn out) as the best method. So many miraculous deeds have been reported from him.

His great interest in Ibn 'Arabi and Rumi raised criticism of some scholars and led some people to treat him with contempt.

Although he is famous mostly for his mysticism, his love for mysticism did not prevent him from [learning] other Islamic sciences such as hadith, jurisprudence (fiqh), and exegesis of the Qur'an; even he criticized the educational system and some of the text books of seminaries.

His family were of descendants of the holy Prophet (s) and were known for piety and virtuousness, most of whom were clergymen. His family have descent from Ibrahim Tabataba, Imam al-Hasan's (a) grandson.

Sayyid 'Ali's maternal grandfather, Mirza Muhsin Qadi Tabrizi (d. 1306/1888-9), was an Islamic scholar who was so pious. He was the companion of Mulla Hadi Sabziwari.

Qadi married four times during his life and had eleven sons and fifteen daughters. Some of his sons are known for their knowledge and virtuousness such as Sayyid Muhammad Hasan Qadi Tabababa'i, who was a student of his father and brought Bahr al-Ma'arif, by 'Abd al-Samad Hamadani, to his father. He has written Safahat min tarikh al-a'lam in ten volumes, first and second volumes of which have been translated into Farsi by his brother, Sayyid Muhammad 'Ali Qadiniya, the professor of department of theology, and published with the name of Ayat al-haqq in 2010, Tehran. In the first volume, Sayyid Muhammad Hasan has collected poems of his father and written commentary on them.

Sayyid Mahdi Qadi, the teacher of Hasan Hasan Zadi Amuli, is another son of him.

There are different opinions regarding his successor in teaching ethics and mysticism:

Muhammad Hasan Qadi, his son, has regarded Mirza Ibrahim Sharifi, their son-in-law, as Qadi's successor. Also it has been quoted from Hasan 'Ali Nijabat Shirazi, Qadi's student, that Qadi, in the last days of his life, had introduced Muhammad Jawad Ansari Hamadani, as his spiritual successor.

Some others have introduced Sayyid Muhammad Husayn Tabataba'i as his successor. But it is famously said that 'Abbas Hatif Quchani has been his official successor.

However, considering the conditions of that time, difficulties of communication, and the condition of the roads, appointing several successors seems rational. Maybe, Qadi, because of mentioned reasons, had selected several individuals as his successors for several regions.

Sayyid 'Ali lived in Najaf all his life. He did not leave Najaf except for visiting shrine cities of Karbala, Kadhimiya, and Samarra. Once he visited Mashhad about 1330/1912. Coming back from Mashhad, he visited the holy shrine of 'Abd al-'Azim al-Hasani in Rey and lived there for a short time.

Qadi Tabataba'i acquired his earlier education in his native city. He learned al-Tafsir al-kashshaf from his father. In addition to his father, Musa Tabrizi, the author of A commentary on rasa'il al-Shaykh al-Ansari, and Muhammad 'Ali Qarachi Daghi, the author of A commentary on sharh al-lum'a al-dimashqiyya were his teachers. He also learned Arabic and Farsi literature from Muhammad Taqi Nayyir Tabrizi, known as Hujjat al-Islam, the famous poet.

On his father's advice, he became the student of Imam Quli Nakhjawani for a while to purify himself. In 1308/1890-1, in order to continue his education, he immigrated to Najaf where he learned jurisprudence, principles of jurisprudence, hadith, interpretation of Qur'an, and other Islamic sciences from Muhammad Fadil Sharabyani, Muhammad Hasan al-Mamaqani, Shaykh al-Shari'ah Isfahani, Akhund Khurasani, and Husayn Khalili, last one of whom was his teacher of ethics as well.

He also became the student of Sayyid Ahmad Karbala'i and Muhammad Bahari, two brilliant students of Mulla Husayn Quli Hamadani, to practice self-purification. Although Qadi's fame was due to mysticism and ethics, he was also very knowledgeable about hadith, jurisprudence, and interpretation of Qur'an. Although he was an Islamic authority, he attended Kharij classes [seminary lectures not based on reading textbooks] of Sayyid Muhammad Kazim Yazdi, Sayyid Muhammad Isfahani, and other scholars of Najaf. It is said that he attended the kharij class of Shaykh Murtada al-Ansari on the subject of Tahara seven times.

He taught mysticism, ethics, and self-purification to a large number of students among whom brilliant scholars emerged. His classes usually were private and confidential. He had a room in the Indian school where his students visited him. Many scholars and Islamic authorities have been Qadi's spiritual disciples, the most important of whom are:

Opposition from some scholars led some people to treat him with contempt. Even they took out the prayer mat he was sitting on and threatened him with death. Apparently, his great interest for Ibn 'Arabi and Rumi and also the relationship of Bahar 'Ali Shah, a Sufi from Najaf, with Qadi had aroused oppositions and had accused him of being a Sufi.

Mirza Mahdi Isfahani (d. 1325 Sh/1946-7), a scholar from Mashhad, who rejected many philosophical thoughts and theoretical mysticism, was one of Qadi's important opposers. Despite Qadi's commitment to religion and not being attributed to Sufi movements, he firmly opposed him.

Sayyid 'Abd al-Ghaffar Mazandarani, a famous ascetic from Najaf, was also one of Qadi's opposers.

He wrote this book during two last years of his life in Arabic. He could not finish it because of illness. He only could write exposition on one third of the Du'a which was published for the first time in 2005, Tehran. He used to recite this Du'a on the Friday evenings and run sessions for reciting and interpreting this Du'a at his home in Najaf.

It is the interpretation of the holy Qur'an from the beginning to the 91st verse of Sura al-An'am, apparently there is a volume of which in London.

He knew Arabic literature well and composed poems. His Ghadiriyya ode in Arabic which was composed in 1316 Sh/1937-8 is famous. He has composed another Gadiriyya (poem about Ghadir Khum and guardianship of Imam 'Ali (a)) in Farsi as well. 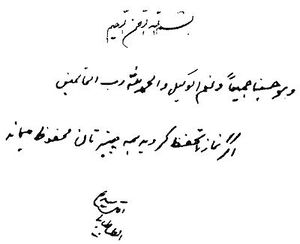 the original manuscript of Sayyid 'Ali Qadi advising: "Preserve your salat (prayer), your everything would be preserved."

It is quoted from Sayyid Muhammad Husayn Tabataba'i that Sayyid 'Ali Qadi was attributed to no Sufi movements, but rather he followed spiritual disciplines of Husayn Quli Hamadani and his teacher, Sayyid 'Ali Shushtari, who themselves followed an unknown ascetic called Jula.

In Husayni Tihrani's (one of the students of 'Allamah Tabataba'i) opinion, Qadi followed the conduct of his father at the beginning, but after his father's death, he became the student of Sayyid Ahmad Karbala'i and followed the conduct of Husayn Quli Hamadani. Qadi was also the companion of Sayyid Murtada Kashmiri for ten years, but he is not counted as his student in ethics and mysticism. Because Kashmiri vigorously opposed Ibn 'Arabi and his works, while Qadi's view point was totally different.

Qadi believed that reaching the position of (true belief in) the Unity of God and true spiritual wayfaring towards God is impossible without accepting the guardianship of Imams (a) and Fatima al-Zahra (s).

In fact, his spiritual conduct was the same as Husayn Quli Hamadani's. According to his discipline, in order to free mind from occupations, the spiritual wayfarer needs to allocate at least half an hour each day for assessing his self, so that gradually he knows himself. Moreover, in order to remove barriers and blockades, he needs to entreat Imam al-Husayn (a).

Among Qadi's other methods of spiritual wayfaring towards Allah are observing on-time daily prayers, observing night prayer, keeping a vigil, and repeating various dhikrs which he himself used to say all the time and also advised his students to do so, such as reciting Yunusiyya dhikr together with the Qur'an in prostration, reciting Sura al-Qadr hundred times on Thursday nights, and reciting Sura al-Tawhid, Du'a Kumayl, and Ziyarat Jami'a frequently. He loved to keep a vigil in the Masjid al-Kufa and Masjid al-Sahla and had small rooms in these two Masjids to worship Allah. He recommended visiting Masjid al-Sahla especially on foot. He also believed that the spiritual wayfarer have to be the Islamic authority, because when some spiritual realms are opened up for him, he would be charged with some duties which only an Islamic authority can find out how to fulfill them properly.

Among mystic books, Qadi recommended Risala sayr wa suluk by Bahr al-'Ulum. However, it is quoted from 'Abbas Quchani, his student, and Muhammad Hasan Qadi, his son, that Qadi allowed nobody to follow some difficult instructions of this book. He loved Futuhat al-Makkiyya and Mathnawi Mulawi and believed that some mystics such as Rumi and Ibn 'Arabi were Shi'a. On the contrary, he believed that keeping some books at home, such as al-Aghani (by Abu l-Faraj al-Isfahani), would bring bad omen because of introducing singers and musicians and describing their immoral behaviors.

Aqa Buzurg, who was Qadi's friend for years, has admired Qadi for his steadfastness, nobility and dignity. In spite of poverty and simple life style, he disapproved of unlawful and strict asceticism. He believed that the spiritual wayfarer should care about his body as well, because body is the mount of soul. Thus, he cared about his appearance and used to wear perfume and clean white clothes. He always advised others to be good-mannered and do good.

So many miraculous deeds by Qadi such as Instantaneous Teleport and taking the life of a snake saying the word of al-Mumit [a name of Allah which means giver of death] have been reported. It is quoted from Abu l-Qasim al-Khoei that extraordinary events took place at the death of Sayyid 'Ali Qadi. It is also said that some miraculous events have been occurred upon his grave. Like Sunnite jurisprudents, he believed that the religious timing for sunset is when the sun goes out of horizon sight.

Criticizing the Educational System of the Seminary

Qadi criticized the educational system and some textbooks of the seminary. He believed that the textbooks should be replaced by new ones. Even he wanted 'Abbas Quchani, his student, to rewrite Jawahir al-Kalam by Muhammad Hasan Najafi, so he rewrote 21 volumes (of 43 volumes) of the book with his own research and marginal notes. They were published in 1986-7, Tehran.

He persuaded Mirza Ibrahim Sharifi, his son-in-law, and Sayyid Muhammad Husayn Tabataba'i into composing a book on the conduct of the Prophet (s) from Shi'a's point of view, since most of such books have been composed by non-Shiites. He advised his students to study the history of Islam from the birth of the Prophet (s) to the birth of Imam al-Mahdi (a). He also persuaded them to study theoretical mysticism and philosophy. 'Abbas Quchani, his student, was the only one who taught philosophy in Najaf at that time.

In his latest years of life, Qadi took the illness of polydipsia and passed away on Rabi' I 7, 1365/ February 9, 1946; and Sayyid Jamal al-Din Gulpaygani performed prayer over his body. He was buried in Wadi al-Salam, near the site of seeing Imam al-Mahdi (a) (Maqam Sahib al-Zaman), beside his father.