Sayyid Aḥmad Shubayrī Zanjānī (Persian: سید احمد شبیری زنجانی) was a Shi'a jurist and among the teachers of the seminary of Qom. He was a close friend of Imam Khomeini and Sayyid Muhammad Hujjat Kuhkamara'i and a senior member of his Religous Inquiries Council. Zanjani was the manager of Hujjatiyya Seminary in Qom. He was the leader of the congregational prayer in Faydiyya School and in the Shrine of Lady Ma'suma (a) for a while. Al-Kalam yajurr al-kalam is among his famous works. Ayatollah Sayyid Musa Shubayri Zanjani, among current Shi'a religious authorities, is his son.

Ayatollah Sayyid Ahmad Husayni (Shubayri) was born in Zanjan (a city in north-west of Iran) in 1308/1891. His father Sayyid InAyatollah, son of Mihr Ali Dusarani was among the students of Mulla Qurban Ali Zanjani. He finished his primary and intermediate level of education in his hometown and after a period of teaching in Seyyed school, immigrated to Qom in 1346/1927 to continue his education and benefit from Ayatollah Abd al-Karim Ha'iri Yazdi and lived in Qom until the end of his life. 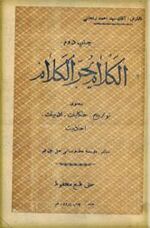 During his stay in Zanjan, Sayyid Ahmad participated in religious activities associated with people of knowledge and sometimes in activities related with important issues of the city. In critical situations, the bazar closed with his agreement. In 1344/1926, when Ibn Sa'ud demolished the graves of Imams (a) in Baqi' cemetery in Medina, he and Haj Mirza Mahdi Mirza'i Zanjani—– who was the chief of clergies in Zanjan— wrote letters to different cities and to [shut down the bazars and] make Shawwal 8th off as an expression of aversion toward this crime. He also had a key role in the management of Sayyid seminary of Zanjan and supervised the scientific and moral education of the students.

Leader of the Congregational Prayer in Faydiyya School 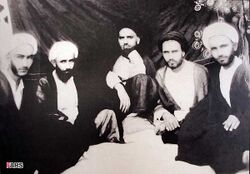 Holding the Meetings of Scholars in Shubayri's House

During the management of grand Ayatollahs Sayyid Sadr al-Din Sadr, Sayyid Muhammad Hujjat Kuhkamara'i and Sayyid Muhammad Taqi Khwansari, the meetings of religious authorities about important and general issues of the seminary were held in the house of Ayatollah Zanjani. The important meeting of great scholars of Qom about the aftermath of the uprising of 15 Khurdad in June 5, 1963 (after Imam Khomeini was captured by the Pahlavi Regime) was held in the mentioned house. He was a member of the council of reformists of the seminary of Qom which was formed at the time of Ayatollah Burujirdi. Ayatollah Burujirdi had also appointed Zanjani with the responsibility of managing judicial issues of clergies, so he was referred to in clerical disputes, and he judged in disputes related to clergies.