Sayyid Asad Allāh Madanī (Persian: سیّد اَسَدالله مَدَنی), (1914-1981) was a Shiite clergy and the imam of Friday Prayer in Tabriz. He was a political activist before the Islamic Revolution of Iran and was repeatedly exiled by the Pahlavi regime to different cities of Iran. After the Islamic Revolution, he was elected as the representative of people in Hamadan in the Assembly of Experts for Constitution. He was Imam Khomeini's representative in Hamadan and the imam of the Friday Prayer there. He was later appointed to the same position in Tabriz. Madani was assassinated after performing the Friday Prayer by People's Mujahidin Organization. He is known in Iran as one of the Mihrab Martyrs (ones who were martyred in mihrab). He was buried in Qom inside the Holy Shrine of Fatima al-Ma'suma (a).

Sayyid Asad Allah Madani was born in 1914 in Azarshahr, near Tabriz. His mother died when he was 4 and his father, Aqa Mir 'Ali, died when he was 16 years old. He learned the preliminaries of Islamic disciplines from Mirza Muhammad Hasan Mantiqi and Mirza Muhsin Mir Ghaffari, scholars in Azarshahr, and then moved to the Islamic Seminary of Qom to continue his educations. His friends objected to his decision by saying that it was not a good time for such a migration because Reza Khan had restricted the activities of Muslim scholars and banned any preaching and propagations of Islam, but he replied: "at least I can learn things and become a preacher for myself".

Madani started teaching in the Islamic Seminary of Najaf as well. He taught Kifayat al-usul, al-Rasa'il, al-Makasib al-muharrama, and dirayat al-hadith. According to Husayn Rasti Kashani, many students attended Madani's lectures in Najaf. Madani himself says: "when I was in Najaf, some people asked me to publish a tawdih al-masa'il (book of fatwas) but I refused to do so, because there were authorities such as Imam Khomeini all of us were obliged to follow. 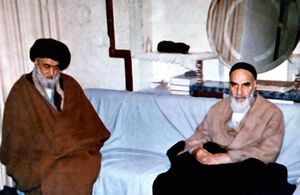 Madani started his political and social activities since he began his studies in Qom. In his early activities, he went to his hometown, Azarshahr, for a while and delivered lectures against the economic and social influence of Baha'is in the city which resulted in the banishment of Baha'is from Azarshahr. After this, Azarshahr police (shahrbani) exiled Madani to Hamadan for a while.

When Sayyid Mujtaba Nawwab Safawi went to Iran to kill Ahmad Kasrawi, Ayatollah Madani gave all his saving (which he had collected for his marriage expenses) to Nawwab.

During the rule of Gamal Abdel Nasser in Egypt, Madani and a group of Iranian scholars in the Islamic Seminary of Najaf went to Egypt to make revelations against the coup government of Fazlollah Zahedi.

On July 27, 1962, Madani went to Hamadan through Iraq. As a protest to the approval of the Bill of Provincial and State Associations in the Jami' Mosque of Hamadan, Madani encouraged people there to support the campaigns of the Islamic Seminary of Qom. Along with other scholars of Hamadan, he sent a telegraph to Asadollah Alam to express his objections to the approval of the bill.

When Ayatollah Sayyid Muhsin Hakim passed away, Madani advocated the marja'iyya of Ayatollah Khomeini in Hamadan. According to a report by SAVAK, Madani had turned more than one-third of people in Hamadan into followers of Imam Khomeini's marja'iyya. Madani's come and go between Hamadan and Najaf continued until early 1350SH/1971 when he went to Khorramabad at the request of people and clergies there.

In Khorramabad, he began his activities by teaching advanced courses in the Islamic Seminary of Kamalwand, and after a while, he was selected as the supervisor of the seminary. He was soon introduced to people and clergies of Khorramabad as the plenipotentiary representative of Imam Khomeini. After Madani's continued political speeches, the SAVAK in Tehran ordered the SAVAK in Lorestan in October 1975 to exile Madani to Nurabad near Mamasani for three years. In 1977, he was exiled to Gonbad-e Kavus. Because of his illness, the Social Security Commission of Khorramabad changed the place of his exile in July 1978 to Mahabad.

When Imam Khomeini's house in Najaf was sieged in October 1978, he and some other clergies in exile issued a statement denouncing the act by the Baath regime in Iraq.

Late in December 1978, Madani entered Hamadan and was warmly welcomed by people there. He undertook the leadership of campaigns against the Pahlavi regime in Hamadan. On February 10, 1979 when the 81 armored unit of Kermanshah moved towards Tehran to oppress revolutionaries, shrouded people of Hamadan prevented the movement of the tanks at the order of Madani, and some of them were martyred.

Activities after the Revolution 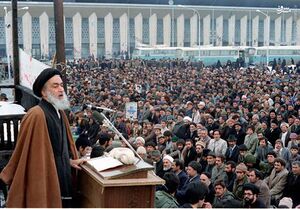 When the Assembly of Experts for Constitution was formed, Madani was elected by people of Hamadan as a representative in the assembly, and at the order of Imam Khomeini, he was appointed as the Imam of the Friday Prayer in Hamadan with full authority. 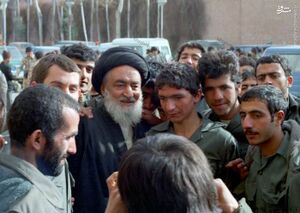 When the Iran-Iraq War began, Madani tried to encourage Iranian warriors. In order to do so, he put on military uniforms, attended some battles in the frontline, stayed with Iranian forces, and attended their supplication ceremonies.

Construction of a Mahdiyya in Hamadan.

Establishment of a loan fund in Hamadan.

Construction of Mahdiyya Clinic in Hamadan.

Construction of a public bathing, a Husayniyya, a mosque, a school, a library, and a loan fund in the village of Morad Beyg.

Establishment of a loan fund in Qasr-e Shirin.

Construction of some houses in a village near Buin Zahra.

Construction of a mosque in Nurabad near Mamasani.

Ayatollah Sayyid Asad Allah Madani was martyred after performing the Friday Prayer by People's Mujahidin Organization at 13:45 on September 11, 1981. His corpse was carried in funerals both in Tabriz and Qom, and was then buried in the Holy Shrine of Fatima al-Ma'suma (a). In a message, Imam Khomeini referred to him as a person who spent a lifetime purifying his soul, serving Islam, training Muslims, and campaigning for the right path and against the wrong paths, and a person who was only concerned with Islam and Muslims.