Sayyid Ḥasan Mudarris* (Persian:سید حسن مدرس) (b. 1287/1870 – d. 1356/1937) was a Shi'a faqih and politician. Mudarris was introduced by faqihs to the second parliament after the 1908 Bombardment of the Majlis of Iran by Muhammad 'Ali Shah Qajar, in the time of Iranian Constitutional Revolution. He was representative of people of Tehran in National Consultative Majlis. In the time of World War I, Mudarris organized the National Defense Committee and moved to Qom. He opposed Reza Shah's actions, which led to his exile and martyrdom. Martyrdom anniversary of Sayyid Hasan Mudarris in Iran is named as the Day of Majlis.

Sayyid Hasan Mudarris was born in 1287/1870-1 in a village near Isfahan. Sayyid Isma'il Tabataba'i, his father was in charge of religious affairs of the village. Sayyid Hasan studied for thirteen years in the seminary of Isfahan with his grandfather Sayyid 'Abd al-Baqi in 1298/1881. He also learned from great teachers including Mirza 'Abd al-'Ali Harandi, Mulla Muhammad Kashi, Jahangir Khan Qashqa'i, and Muhammad Baqir Durchi'i.

Mudarris moved to Najaf in 1311/1893-94 and stayed with Shaykh Hasan 'Ali Nukhudaki al-Isfahani in the same room in seminary of Najaf. He attended the classes of Sayyid Muhammad Fisharaki and Shari'at Isfahani. Sayyid Hasan also held discussions with Sayyid Abu l-Hasan Isfahani and Sayyid 'Ali Kaziruni. After seven years he attained Ijtihad from religious scholars of Najaf and returned Isfahan in 1318/1900-901.

After returning to Isfahan, Mudarris started teaching fiqh and usul al-fiqh as well as logics and Sharh al-Manzuma. Also he taught Nahj al-Balagha on Wednesdays. When he entered Tehran, he started teaching in Sipahsalar School and he was assigned in charge of this school in 1304/1925. For the first time, Sayyid Hasan administrated giving tests to student clergymen and drafted a manual for them. He also revived and flourished waqf properties of the school.

He trained several students during his scholarly life that the most well-known of them are Abu l-Hasan Sha'rani who was one of prominent philosophers of his time; Mahdi Ilahi Qumshi'i who was also a philosopher and mystic that wrote a famous translation of the Qur'an in Farsi; and Sayyid Murtada Pasandida, the older brother of Imam Khomeini.

After the conquest of Tehran by Constitutionalists, the public election for second Majlis (Parliament) was held. Based on the second principle of constitution, five Mujtahid (religious leaders) should have been included in order to observe compatibility of the legislations to religious laws, passed by Majlis. Then religious scholars of Najaf introduced twenty mujtahids including Sayyid Hasan Mudarris to National Consultative Majlis and he was chosen for Majlis.

In the third Majlis, Mudarris was serving as the observer and also deputy of people of Tehran. After the start of the World War I and entrance of the Allies troops to Iran, a number of Majlis representatives migrated to Qom to represent their discontent and to form a shadow cabinet. They formed a committee in Qom called National Defense Committee. Then Russian troops came to Qom and defeated them, which led to migration of some of them to western regions of Iran. When the World War I ended, Mudarris and other migrators returned to Tehran and continued teaching in Sipahsalar School.

Picture of Sayyid Hasan Mudarris on 100 rials Iranian banknote, issued between 1981 and 1985. 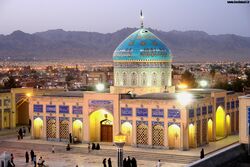 Diya' al-Din Tabataba'i's cabinet arrested and imprisoned a number of politicians and Majlis deputies in order to refrain from any possible resistance and rebellions including Sayyid Hasan Mudarris. He was first prisoned for a short time, then he was exiled to Qazvin where he was restrained. However, after Ziya' al-Din he returned to Tehran.

In the fourth Majlis, Sayyid Hasan Mudarris opposed Angelo-Persian agreement in 1919. Meanwhile, Reza Shah interfere with financial, governmental and military affairs as he was in charge of Department of War. At first, Mudarris tolerated Shah's interference, but after some time, he publicly opposed his actions.

Reza Shah managed to back his supporters with the help of military officials to enter the fifth Majlis. Initially he planned to change the monarchy system of Iran to a republic. Therefore, Mudarris sent letters to inform a large number of religious scholars in Qom and explained the identity of Republic Regime that Reza Shah had in his mind. When Reza Shah travel to Qom and met religious leaders, he officially stated that he would refuse to change the country ruling system to a republic.

Sayyid Hasan Mudarris was the target of a failed assassination in 1305/1926 when he was on his way to Sipahsalar School. Nur Allah Isfahani, influential religious scholar of Isfahan, along with a number of clergymen of Isfahan opposed the actions of Reza Shah and moved to Qom. He asked other religious scholars all over the country to migrate to Qom to express their discontent with Reza Shah. Mudarris supported the migration and cooperated with them. 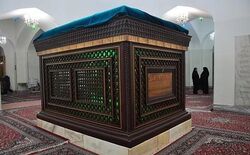 Mudarris was arrested in 1306/1927 and was exiled to Khaf and later to Kashmar for nine years. He was eventually martyred in prison in the eve of Ramadan 27, 1356/December 1, 1937. He is buried in Kashmar, Iran. The martyrdom day of Mudarris is known in Iran as Majlis Day (the Day of Parliament).

The material for this article is mainly taken from سید حسن مدرس in Farsi Wikishia.