Muḥammad Kāẓim Khurāsānī (Persian: محمدکاظم خراسانی ), (b. 1255/1839 - d.1329/1911), known as Akhund Khurāsānī (Persian: آخوند خراسانی ) , was a prominent Shiite authority (marja' al-taqlid) and a scholar of 'usul al-fiqh in the 14th/20th century; he was the author of the seminal work in 'usul, Kifaya al-'usul, and was a main supporter of Iranian Constitutional Movement (nihzat-i mashruta). His explicit positions in support of the Iranian Constitutional Movement and his serious decision to move to Iran in order to defend the country against the occupation of parts of this land by aliens indicates his resolve against colonialism and despotism. He viewed the Constitutional System as a means to prevent cruelty, and believed that it is an obligation for any Muslim to help this movement. Khurasani issued a fatwa for jihad against Mohammad 'Ali Shah after he bombarded Majlis in 23 of Jumada I in 1326/June 23, 1908.

Akhund Khurasani was born in 1255/1839 in Mashhad. His father, Mulla Husayn Hirawi Khurasani, was a clergyman who was originally from Hirat, but he migrated to Mashhad before the birth of his son.[1]

Muhammad Kazim Khurasani initially studied in Mashhad with his father and some other scholars. And in Rajab 1277/1861, he went to Najaf.[2]

On his way to Najaf, Akhund Khurasani attended the philosophical courses of Mulla Hadi Sabzawari in Sabziwar for three months. When he arrived in Tehran, he stayed in Sadr School for a while and studied philosophy with Mirza Abu l-Hasan Jilwa and Mulla Husayn Khoei.[3] 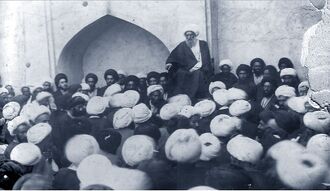 Akhund Khurasani teaching in a seminary in Najaf

After Shirazi passed away in 1312/1895, many students returned from Samarra to Najaf and attended the courses of Khurasani. This helped him establish his place as the greatest teacher and scholar in Najaf.[9]

Features of his Teaching

Akhund Khurasani was very strict in holding his classes and rarely did he close them; even at the time when there was a cholera outbreak in Najaf because of which many courses in Najaf were closed, Akhund still held his classes despite the fact that three of his close relatives died of cholera.[10]

In the first half of the Rajab month in some years, Akhund used to go to Karbala; even then he held some classes there. And in Ramadan months when the usual courses of the Islamic seminaries are off, he taught courses such as the principles of Shiite beliefs or ethics.[11]

Khurasani taught fiqh in Farsi, and 'usul in Arabic.[12]

After Mirza Shirazi passed away and some of his followers consulted Akhund Khurasani in order to follow his fatwas, he held some meetings with some of his students in order to answer istifta'at (asking for fatwas); students such as Sayyid Abu l-Hasan Isfahani, Muhammad Husayn Isfahani, Sayyid Husayn Tabataba'i Burujirdi, 'Abd al-Karim Ha'iri Yazdi, Aqa Diya' al-Din 'Iraqi, Aqa Husayn Qumi, Muhammad Husayn Na'ini.[13]

Here are some of his students:[15]

Akhund Khurasani was keen to the political and social problems of Islamic countries, in particular, the Shiite country of Iran. His explicit positions vis-à-vis the Iranian Constitutional Movement and his serious decision to move to Iran in order to defend it against the Russian occupation are evidence of his concerns regarding despotism and colonialism.

An examination of Khurasani's political positions helps classify his struggles in four fronts:

Akhund Khurasani knew Constitutionalism very well, but since he took the occurrence of the revolution to be certain, he tried his best to lead it to the way of religious doctrines and to prevent it from secular tendencies like those of post-Renaissance revolutions.[17]

Khurasani had no role in the initial formation of Constitutionalism. Following the turbulent economic, social and political circumstances of Iran and the tensions between the State and the opposition groups in Tehran, Akhund was frequently asked—for example, by some scholars who later opposed Constitutionalism—to support the movement.

One of the first measures taken by Akhund Khurasani in this regard was his joint announcement (together with Muhammad Sharabiyani, Muhammad Hasan Mamaqani, and Mirza Husayn Khalili Tihrani) on Jumada II 21, 1321/September 14, 1903 stating a strong dissatisfaction by the performance of the Chancellor of Muzaffar al-Din Shah, Mirza 'Ali Asghar Khan Amin al-Sultan, saying that he is the cause of all corruptions and the dominance of foreigners in the country.[18]

Akhund Khurasani viewed Constitutionalism as a means of preventing the cruelty against people and announced that it is an obligation for all Muslims to help the movement. In a letter to a preacher in Tehran, Akhund Khurasani wrote: "our purposes in all these efforts are the satisfaction of people, preventing the cruelty against them, helping the oppressed people, enjoining the virtue and forbidding the vice (al-amr bi l-ma'ruf wa al-nahy 'an al-munkar) and other helpful Islamic laws".

Some well-known scholars opposed Constitutionalism, however, such as Sayyid Kazim Yazdi or Shaykh Fadl Allah Nuri who was first with the movement, but took side with the opponents of the movement since he believed that it deviated from its origin.

As a response to the opponents of Constitutionalism, Na'ini who was a student of Akhund Khurasani wrote a book— Tanbih al-umma wa tanzih al-milla. Akhund Khurasani also wrote a praise note for the book.

Constitutionalism finally gained victory; Muzaffar al-Din Shah accepted Constitutionalism in Jumada I 1324/August 1906, and he ordered the establishment of Majlis (parliamentary)— the first meeting of Majlis was held in Sha'ban 18, 1324/October 7, 1906.

Khurasani was occasionally asked about the law of Constitutionalism, for example, about the national system (the law of Conscription), and the August 1907 agreement between Russia and England. Akhund wrote a letter to the representatives of Majlis asking them to perform Islamic laws, pay the debts of the country and eliminate poverty.

After Majlis was bombarded by Muhammad 'Ali Shah in 23 of Jumada I, 1326/June 23, 1908, Akhund Khurasani issued a fatwa for jihad against the Shah which led to the victory of the Constitutionalists. But soon after that, Akhund Khurasani had to take a position against Constitutionalism for some reasons, including the execution of Shaykh Fadl Allah Nuri, the insult of Islam and the clergy in the Habl al-matin magazine which led Akhund Khurasani to ask for the magazine's ban, the exile of Qurban Ali Zanjani who was a mujtahid, and the assassination of Bihbahani at the command of Taqizada.

Akhund Khurasani also struggled against the presence of Russian soldiers in Iran. Though it was two months after the establishment of the second Majlis, no measure had been taken for the exit of Russian forces. Akhud Khurasani sent a message to Iranians and asked them not to purchase Russian goods.

When Majlis finally resisted Russia, Russia occupied Iran from the north to Qazvin in the year 1328/1910. Khurasani closed all his classes, and following him all other classes in Najaf were closed. They decided to boycott all Russian goods and send students of the Islamic seminaries and the tribes of Najaf to Iran in order to fight with Russia.

Many scholars from Najaf, Karbala, and Kazimayn had prepared themselves for the journey to Iran, and they were supposed to go from Najaf to Sahla Mosque for prayers and then go to Iran. But the death of Akhund Khurasani did not allow the journey to happen.

In order to propagate religious teachings, Akhund Khurasani helped to establish and publish some journals in Najaf, including the journal of Al-'ilm in Arabic, which was founded by his pupil, Sayyid Hibat al-Din Shahristani, and the Persian journal of Najaf Ashraf founded by some of his pupils.[21]

Despite his engagement with Shiite authority and in particular, the movement of Constitutionalism late in his life, Akhund Khurasani left many valuable scholarly works.

His works might be classified in three categories: his own writings, his fatwas, and lecture reports (taqrirat) by his pupils. 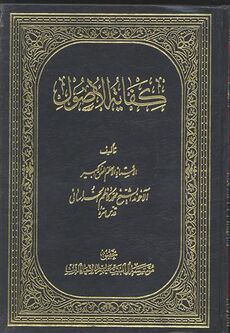 Most of his writings concern 'usul, fiqh and philosophy both as monographs and as commentaries on other works.

People close to Khurasani have found him virtuous, courageous, clever, affable, smiling and at the same time impressive.

During his education, Khurasani went through many hardships. And after his marja'iyya he was very generous even to his opponents, but he was financially strict with regard to his children; he never used shari'a funds for his own life.[30]

Muhammad Kazim Akhund Khurasani died in the early morning of Thursday, Dhu l-Hijja 20 1329/December 12, 1911 in his own house after he said his prayers.[31] He was 74 years old when he died. Some people believe that he died from poisoning.[32]

After his funeral, 'Abd Allah Mazandarani said prayers (salat al-mayyit) on his corpse, and he was buried in the mausoleum of Mirza Habib Allah Rashti in the courtyard of Holy Shrine of Imam 'Ali (a).[33]

On Muharram 18, 1433/December 14, 2011 the International Conference of Akhund Khurasani was held in Qom by the Islamic Propagation Office (Daftar-i Tablighat-i Islami).