Al-Sayyid Muḥammad Saʿīd al-Tabātabāʾī al-Ḥakīm (Arabic: سيد محمد سعيد الطباطبائي الحكيم,; February 1, 1936– September 3, 2021) was a Shiite marja' in Iraq. He was the son of al-Sayyid Muhsin al-Hakim's daughter, a Shiite marja' in the fourteenth/twentieth century. Muhammad Sa'id al-Hakim began his seminary education in childhood. He was a student of al-Sayyid Muhsin al-Hakim, Husayn al-Hilli, and al-Sayyid Abu l-Qasim al-Khoei. Since young ages, he taught jurisprudence and principles of jurisprudence as well as ethics and Quranic exegesis.

Al-Hakim wrote works concerning jurisprudence, principles of jurisprudence, theology, and social issues. Muhammad Sa'id al-Hakim was imprisoned for eight years during the period of Saddam Hussein. After the death of al-Sayyid Abu l-Qasim al-Khoei, he became a Shiite marja'. His representative offices are active in cities such as Najaf, Qom, Damascus, and Beirut.

Muhammad Sa'id al-Hakim began seminary studies with his father at the age of ten. His father taught him throughout the whole intermediary level of seminary educations. He then attended advanced lectures by scholars such as al-Sayyid Muhsin al-Hakim and Husayn al-Hilli.[4] Allegedly, al-Sayyid Muhsin al-Hakim assigned him with the task of editing and extracting the sources of his Mustamsak al-'urwat al-wuthqa.[5]

Some of his students who are active in Iran, Iraq, and Arabia are,

Al-Sayyid Muhammad Sa'id al-Hakim has published twenty-four books within over forty volumes concerning jurisprudence, principles of jurisprudence, new jurisprudential problems, and some social issues. Some of his works are translated into other languages as well.[9]

His most important works include al-Muhkam fi usul al-fiqh concerning principles of jurisprudence in six volumes,[10] and Misbah al-minhaj in nineteen volumes, which is an exposition of the jurisprudential book, Minhaj al-salihin, by al-Sayyid Muhsin al-Hakim.[11]

He also wrote about new problems such as cloning, computers, and cyberspace.[12] 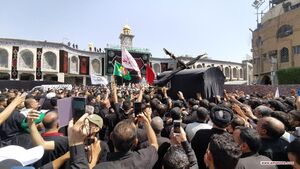 Al-Sayyid Muhammad Sa'id al-Hakim was chased and wanted by the Ba'ath regime and was a fugitive for a while because of his opposition to the approval of legislation by which walking for the pilgrimage of Imam al-Husayn (a) was banned during the government of Saddam Hussein.[13] Moreover, he and eighty members of al-Hakim Family were arrested, and he was imprisoned for eight years because they refused to attend an Islamic popular conference organized at the command of Saddam Hussein.[14]

After the death of al-Sayyid Abu l-Qasim al-Khoei, al-Sayyid Muhammad Sa'id undertook the marja'iyya of Shi'as. Today, his representative offices are active in Najaf, Qom, Damascus, and Beirut, responding to questions by Shi'as.[15] He also sends preachers to different parts of Iraq, particularly its southern parts, to solve the problems of nomads and villagers. He did similar activities in Iran, India, and Pakistan.[16]

Muhammad Sa'id al-Hakim took a stand on the massacre of Shi'as in Pakistan by a group called "Sahabah", announcing that the Pakistani government should respond to these attacks. Nawaz Sharif, the prime minister of Pakistan, wrote a reply to his statement, expressed his sympathies, and announced the resolution of his government to fight the agents of the Shiite massacre.[17]

Al-Hakim's works include letters he wrote to people of Azerbaijan and Gilgit in Pakistan.[18]

Muhammad Sa'id al-Hakim has propounded novel views concerning certain jurisprudential issues. For example, he believes that the punishment of an apostate (a person who opts out of Islam) is outside the domain of jurists.[19] Also, concerning the problem of moon sighting (at the beginning of lunar months), he identifies horizons of Asia, Africa, and Oceania. On this fatwa, if the crescent is seen in a city in one of these regions, the lunar month begins in all these regions, and all its jurisprudential rulings will ensue.[20]