Dhī Qār (Arabic: ذی قار), is an area in southern Iraq, where the Battle of Dhi Qar occurred between the Sassanid army and the Arabs after the prophetic mission of the Prophet (s), which ended with the victory of the Arabs. Moreover, in 36 AH before his encounter with those who raged the Battle of Jamal, Imam 'Ali (a) had a sojourn in Dhi Qar, where he delivered a sermon for his companions. The sermon is mentioned in Nahj al-balagha.

Today, Dhi Qar is a governorate in Iraq, and its capital is Nasiriyah. Dhi Qar Governorate has a population of over two million people, most of whom are Shias. The city of Ur is an archeological monument of this governorate, where Prophet Abraham (a) was born and a famous ziggurat (Sumerian temple) is located.

Dhi Qar is an area between Basra and Kufa in southern Iraq.[1] According to Yaqut al-Himawi, there was a water well called Dhi Qar in that area, which belong to the tribe of Bakr b. Wa'il.[2] Abu l-Hasan al-Bayhaqi, a sixth-century AH scholar, also believes that the reason why the area was called Dhi Qar was the existence of a well there, whose water was as black as pitch.[3]

Some historical events took place in Dhi Qar, including the battle between the Arabs and the Sassanid Empire, and Imam 'Ali’s (a) sojourn there on his way to the Battle of Jamal.

The Battle of Dhi Qar occurred in this region between the tribe of Bakr b. Wa'il and Hormuzan, Khosrow II’s envoy.[4] Allegedly, the battle occurred because of the murder of Nu'man b. Mundhir al-Lakhmi, a head of Arab tribes, by Khosrow II.[5] The battle took place when the Prophet (s) was forty years old, but some people believe that it occurred after the Battle of Badr when the Prophet (s) lived in Medina.[6] In this battle, the Arabs defeated Khosrow II’s envoy. The Prophet (s) is quoted as saying: This is the first time that, by my blessing, the Arabs have reclaimed their rights and won the non-Arabs.[7]

On the Way to the Battle of Jamal

According to historical sources, when Imam 'Ali (a) was to encounter 'A'isha, Talha, and Zubayr, he and his army moved from Medina to Iraq, and once they entered Iraq, he had a sojourn in Dhi Qar.[8] 'Abd Allah b. 'Abbas is quoted as saying that when they arrived in Dhi Qar, he asked the Imam: few people from Kufa have come to help you. The Imam (a) said: Exactly 6560 people will come to help me.[9] According to Ibn 'Abbas: after that, we stayed for fifteen days in Dhi Qar until we heard neighs from horses and mules, and the army of Kufa joined us. I counted them, and the number was exactly what the Imam had told me.[10]

Moreover, Ibn 'Abbas is quoted as saying that he met Imam 'Ali (a) in Dhi Qar while the Imam (a) was stitching his shoes. He asked me, what is the value of these shoes? I said, nothing. He said, I swear to God that these torn shoes are dearer to me than ruling over you, unless we could establish right and ward off wrong. He then went out and delivered a sermon for people.[11] The sermon is cited in Nahj al-balagha, in which he talks about the wisdom behind the missions of prophets and his own superiority, and reproaches his opponents.[12] 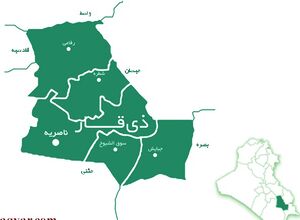 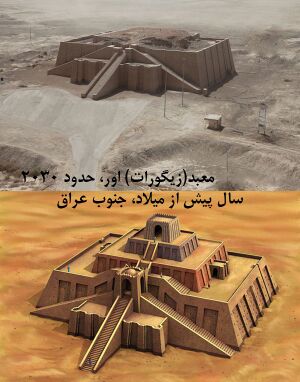 ziggurat in the city of Ur

There is a governorate in Iraq, which is called Dhi Qar. Its capital is Nasiriyyah, 180 kilometers from Basra and 360 kilometers from Baghdad.[13] Early after its establishment, the governorate was known as al-Muntafak, but during the republic period, it was renamed as Nasiriyah. The Ba'ath government of Iraq renamed it as Dhi Qar in 1969.[14]

Dhi Qar Governorate has a population of over two million people, and the majority of its residents are Shias. Others are Sunnis, Mandaeans, and Christians. The city of Ur is an archeological monument in the area, where Sumerians and Akkadians lived.[15] It was the birthplace of Prophet Abraham (a)[16], and a famous ziggurat is located there.[17]