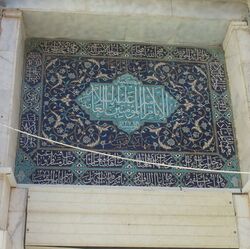 The entrance of the library

Maktabat al-Imām Amīr al-Mu'minīn al-'Āmma (Arabic: مَکْتَبَةُ الْاِمام اَمیرُالمؤمنین العامَّة, lit: Public Library of Imam Amir al-Mu'minin) is a public library in Najaf founded by 'Allama Amini in 1954. The library consists of different sections and is administered by a selected board of trustees. 'Allama Amini endowed the library to Astan Quds Razavi.

'Abd al-Husayn al-Amini (the author of al-Ghadir) founded the Public Library of Imam Amir al-Mu'minin in Najaf in al-Huwaysh area in Jumada I 1, 1373/January 1954. The library was, nevertheless, inaugurated over two years later on Eid al-Ghadir, 1376/June 1957. The library's architecture is of an Islamic and Arabic style. 'Allama Amini constructed the main building of the library in a land with an area of 260 square meters, which he had purchased from a person called Sayyid Hamza Bahr. He then bought another piece of land in order to develop the building into a collection of libraries, a publication, a printing house, a charity institute, an Islamic research center, a cultural association, and a seminary school. Thus, the area of the library amounted to 1750 square meters.

Amini endowed the library to Astan Quds Razavi. In the sixth section of the endowment deed, he emphasizes that if it is difficult for administrators of the library to manage its finances or if they are no longer available, then the management of the library will be assigned to the Library of 'Ali b. Musa al-Rida in Khurasan, which will be in charge of its management and finances.

Sections of the Library 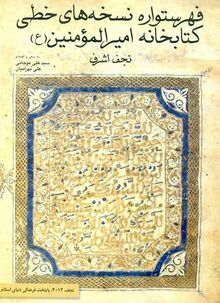 The library consists of different sections as follows:

A view from inside the library

The Library of Amir al-Mu'minin publishes a magazine under Sahifat al-Maktaba (the library's magazine) in both Arabic and Persian. Published issues of the magazine contain articles about its manuscripts and important sources found by 'Allama Amini in libraries of different countries. The magazine also contains articles about the importance of books and libraries and pieces of advice to administrators and employees of the library and librarians to kindly and professionally treat book readers and clients.

Amini always sought to stay in contact with important academic centers of the world, including important international libraries. Thus, he asked those libraries for copies of books which were not available in the Public Library of Imam 'Ali, and then exchanged them with copies of books in his own library. After the foundation of the library, Amini contacted academic communities, authors, publishers, and those involved in the press in different countries, exchanging gifted books between the Library of Amir al-Mu'minin and other libraries.