From wikishia
(Redirected from 'Allama Amini)

ʿAbd al-Ḥusayn Amīnī (Arabic: عبدالحسین امینی) (b. 1320/1902-3 - d. 1390/1970), known as ʿAllāma Amīnī the author of the well-known book al-Gadir, was a Shi'a jurist, muhaddith, theologian, historian, codicologist and one of the great Shi'a scholars in the fourteenth/twentieth century. Beside writing numerous important scholarly works, he also established in the city of Najaf the Amir al-Mu'minin Library, which includes 70,000 manuscripts.

'Abd al-Husayn Amini, the son of Mirza Ahmad Amini was born in Tabriz in 1320/1902-3.[1] His father was a religious leader in Tabriz. His grandfather Mullah Najaf 'Ali, was known as Amīn al-Sharʿ (the Protector of the Shariah); hence his family name was called "Amini".

Amini got the permission for ijtihad from some marja's like Sayyid Abu l-Hasan Isfahani, Muhammad Husayn Na'ini, Muhammad Husayn Gharawi Isfahani[4] and Shaykh Abd al-Karim Ha'iri Yazdi[5]. Regarding the death date of these marja's (between the years 1355/1936-7 to 1364/1944-5), one can see that Allama Amini has gotten the permission for ijtihad and hadith transmission, before the age of 35. Having gained this permission (for ijtihad and hadith transmission), he returned to Tabriz, but after a short while, he went back to Najaf again.[6]

'Allama Amini's magnum opus is the book 'Al-Ghadir fi l-kitab wa l-sunnat wa l-adab (The Ghadir in the Book, the Sunnah, and Literature), a book on verifying Imam 'Ali's immediate Imamate and Caliphate (after the Prophet (s), based on the Event of Ghadir and analyzing the chains of transmission and indication of the Al-Ghadir Sermon.[7] 'Abd al-Husayn Amini has spent forty years of his life writing this eleven-volumes book, and to find the documents of the Event of Ghadir, went all the way into the libraries in Iraq, Iran, India, Syria and Turkey to conduct his research.[8] According to Sayyid Ja'far Shahidi, quoting Amini himself, he has read up to 10,000 books to be able to write the book al-Ghadir. [9] The first to the ninth volumes of the book al-Ghadir have been published in Najaf in 1364/1944-5. The whole compilation of eleven volumes have been published in 1372/1952-3 CE in Tehran.[10] This anthology includes twenty volumes, of which only eleven have been published.[11]

The public library of Amir al-Mu'menin in Najaf was inaugurated on the 18th of DhulHijja 1379 AH/June 13, 1960 CE by 'Allama Amini and at the presence of some of the leading figures of the Shi'a Seminary of Najaf, including Agha Buzurg Tehrani. This library included 500,000 books in different languages and around 70,000 manuscripts.[12] 'Allama Amini, the founder of it, has donated all the books of his personal library – which were around five to six thousand books – to the Amir al-Mu'menin Library. His son, Muhammad Hadi, has given away 1,000 of his personal books to this library.[13] While collecting due hadiths and documents required to write his book on the Ghadir Incident, 'Allama Amini visited many libraries in the Muslim world. The largest library of Najaf at his time had just 4ooo books, and this very shortcoming made him establish a large library in this city.[14] In the year 1373 AH/ 1953-4 CE, at the age of 53, he began collecting the needed book. 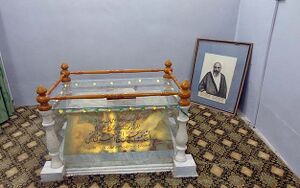 Amini was against publishing books that did not have authentic historical sources and were not based on ijtihad and firm reasoning. Regarding some of the religious books published at his time, he said: "The Farsi books that have been published during these years on the life of Shi'a Imams should all be thrown into the water (thrown away)".[18]

Although Amini was very much interested in the mourning ceremonies for Imam al-Husayn (a) and mourning convocations for other Imams and that in such religious convocations and gatherings felt very much saddened and grieved (upon the remembrance of the suffering of the Ahl al-Bayt (a) and other Imams), yet was not content with them and was very critical of many of them – due to the banality of some of them and the fact that some of the lecturers had no knowledge of the hadith and the religious knowledge, were not pious enough and were unaware of the life of the Shi'a Imams and the history of the incidents in their lives and the reason behind their conflicts with the oppressing powers of their times and about the Shi'a revolutionary culture. He suffered from and was troubled by them all. And was deeply discontented by the undocumented and undue statements of the preachers and the base and banal words of the dirge-reciters. 'Allama Amini once said: "I was taking part in one of Tehran's major convocations. In the middle of the sermon – although it was very improper to do so – I stood up and left the gathering because I would regard it as haram (religiously forbidden) sitting there and listening to those words".[19]

Abd al-Husayn Amini believed that visiting the Imams' shrines and their descendants, contrary to what Shi'as nowadays understand, should have more educational productivity. Thus, one of his first tasks was to publish one of the most authentic texts on the Shi'a ziyara rituals called Kamil al-Ziyarat. Another publication by him was the book Adab al-Zair, describing the due rituals for visiting the Holy Shrine of Imam al-Husayn (a) shrine.[20]

In the introduction of his book in memory of Allama Amini, Hakimin mentions that apart from all that Allama Amini had carried out, there were other tasks that he did not manage to fulfil during his lifetime. Some of these tasks were:

Allama Amini passed away at Friday noon on Rabi' II 28, 1390/July 3, 1970. Some have regarded the cause of his death at the age of 70 – despite having a robust and healthy body – due to severe study and his total dedication to writing and taking care of the library task. In his will, Amini has requested that one be chosen as his representative to go to Karbala for ten years. He also has willed that for ten years, mourning ceremonies be held on the demise anniversary of Lady Fatima al-Zahra (a).