Ayatollah Burujirdi Seminary (Arabic: مدرسة آية الله البروجردي) or Madrasat al-Sayyid al-Burujirdi (Arabic: مدرسة السيد البروجردي) in Najaf is a scholarly and cultural center near the Shrine of Imam 'Ali (a), which was constructed at the command of Ayatollah Burujirdi and under the supervision of Shaykh Nasr Allah Khalkhali. The school is now administered under the supervision of Ayatollah al-Sistani. One important section of the school is a library with many manuscripts. 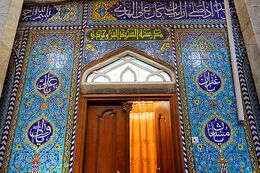 The entrance door of Burujirdi Seminary

There is also another smaller seminary in Najaf in the name of Ayatollah Burujirdi.

The major Ayatollah Burujirdi Seminary was founded in Najaf in 1373/1954 at the command of Ayatollah Burujirdi and under the supervision of Shaykh Nasr Allah Khalkhali, the Ayatollah's general deputy in Iraq. The area of the school amounts to five thousand square meters. It was beautifully built with sixty two chambers within three floors with perfect facilities.

Early after the foundation of the school, part of it was devoted to the library. The personal library of the school’s founder and some books by Iqbal, the founder of Kalala Khawar Publications, and many manuscripts were moved to this library.

During his exile in Najaf in 1344/1966, Imam Khomeini held congregational Evening and Isha' prayers in the school at the request of Khalkhali, the deputy of Ayatollah Burujirdi. Many seminary teachers and students said prayers behind him. During Ramadan months, instead of Evening and Isha' prayers, Ayatollah Khomeini held congregational Noon and Afternoon prayers at the school.

Part of the school was demolished during Saddam's government under the pretext of constructing a street, and thus, its area diminished to seven hundred square meters and the number of its chambers to twenty five. Then, because of their hostility towards Iranians and Iranian traces, the Ba'athis changed its name to "al-Imam al-Husayn."

There is another school at the end of al-'Imara Bazar in Najaf which is also known as Ayatollah Burujirdi. It used to be a residential house and then it was purchased by Sayyid Hashim Bihbahani at the command of Ayatollah Burujirdi. The school was endowed as a seminary in 1378/1959. Its area is about 350 square meters with twenty chambers.