Sāmarrā (Arabic: سامرّا), after Najaf, Karbala, and al-Kadhimiya is the fourth city for pilgrimage in Iraq. The city is located in Salah al-Din province between Tikrit and Baghdad. Samarra became capital of Mu'tasim the Abbasid caliph in 218/833. The city is famous because of the shrine of two Imams (a), Imam al-Hadi (a) and Imam al-Hasan al-'Askari (a). The last Imam was born in Samarra.

It has been mentioned that the city was built before Islamic era, in the time of Ashkanid and Sassanid dynasty by the Shapur II. Yaqut al-Hamawi says: Samarra was built by Sam b. Nuh and it is called "Sam Rah" which means path of Sam b. Nuh.[1] Ibn Batuta also indicates that the name of city comes from "Sam Ra" which means that the city is for Sam. There is another idea that states the original name was "Sham Rah" which means the way of Sham (Syria) and people called it "Sham Rah" because it is located on the way from Iraq to Syria.[2] Some of writers claim that the word Samarra is derived from the ancient Roman word "Sumira." According to historical texts in the time of Sassanid dynasty, the city was under Iranian government and people of the city were obliged to pay taxes to Iranian government and therefore some of Historians claimed that the city was called "Sa' mara" which means the place of calculation.[3] Samarra has other names like: Samarrah, Samirah, Sara', Surra Man Ra'a, Surur Man Ra'a, Sa'a Man Ra'a, 'Askar, and Tirhan.[4] Samarra is located in the east of Tigris.

Al-Mu'tasim al-Abbasi, son of Harun al-Rashid, decided to translocate capital from Baghdad to Samarra in 221/836 and Samarra became capital until 276/889. This decision was made because of numerous Turk armies that al-Mu'tasim gathered in Baghdad and since Baghdad was not capable of hosting that large number of armies and people were annoyed by the presence of the armies, al-Mu'tasim chose Samarra and improved the city and moved the armies to Samarra and called it the new capital. In the time of al-Mu'tasim, Samarra reached its highest extent of power and flourishing and some palaces, promenades, shopping centers, mosques and huge buildings were created in that time. This glory and greatness lasted until the time of al-Mu'tamid al-'Abbasi who chose Baghdad as capital.[5]

Presence of Two Shiite Imams (a)

In 233/847-48, al-Mutawakkil decided to take Imam al-Hadi (a) from Medina to Samarra, because he had received reports about people's tendencies towards the Imam (a).[6] Al-Mutawakkil moved the Imam (a) from Medina to Baghdad and from there to Samarra. Imam al-Hadi (a) resided there for 20 years and 9 months until he was poisoned and martyred in the period of al-Mu'tazz and was buried there.[7]

Foundation of the Islamic Seminary of Samarra

In Sha'ban, 1290/1873, Mirza Shirazi, a Shiite authority, migrated to Samarra and founded an Islamic seminary there. Prominent scholars, such as al-Sayyid Hasan al-Sadr, al-Sayyid Muhsin al-Amin, Muhammad Jawad al-Balaghi, and Agha Buzurg Tihrani, attended the Islamic seminary of Samarra. The fatwa of Tobacco Prohibition was issued during Mirza Shirazi's stay in Samarra.

When Mirza Shirazi died in Samarra in 1312/1895, the Shi'as moved out of Samarra and migrated to other Shiite cities, particularly in the south of Iraq, such as Karbala and Najaf. Thus, Samarra turned into a Sunni city. Decades after the Ba'ath government, there were almost no Shi'as in Samarra. The Holy Shrine of al-'Askariyyayn (a).Photo is taken by British Air Force in 1335/1917 during World War I.

In more than a half of century, eight Abbasid caliphs have ruled in Samarra: 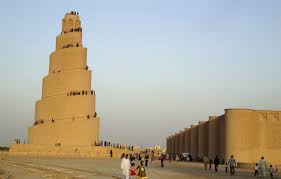 Malwiya minaret in the northern side of Masjid al-Jami' in Samarra. The Holy Shrine of 'Askariyyayn is being reconstructed by Iranians after it was destroyed by terrorists in 1427/2006.

Shrine of Imam al-Hadi (a) and Imam al-'Askari (a) is the most important place for pilgrimage in Samarra.