Muḥammad Taqī Bahjat Fūmanī (Persian: محمد تقی بهجت فومنی) was a Shiite authority (marja') and a contemporary mystic. He was born in 1334/1916. He went to Karbala to study Islamic disciplines in 1929-30, and then in 1933-34 he went to Najaf. After a while he went back to Iran in 1943 and started teaching in the Islamic Seminary of Qom. Ayatollah Bahjat was a pupil of Sayyid Ali Qadi and was known among people and scholars for his piety. In 2009 he died in the Wali 'Asr (a) Hospital in Qom and was buried inside the Holy Shrine of Fatima al-Ma'suma (a).

Muhammad Taqi Bahjat was born in 1916 in a religious family in Fuman in Gilan province of Iran. He later turned the house in which he was born into an Islamic seminary school. When he was 16 months, Bahjat lost his mother and was brought up by his father. His father, Mahmud, made a living by making a sort of traditional cookie in Fuman.

After his preliminary studies in Fuman, Ayatollah Bahjat emigrated from his birthplace in 1348/1929-30 and moved to Islamic seminaries in Iraq in order to study Islamic disciplines. He first resided in Karbala for four years.

After receiving permissions of ijtihad from his masters, Bahjat returned to Iran in 1363/1944 and stayed in Fuman for a few months in order to visit his family and relatives. He then went to Qom in order to visit the Holy Shrine of Fatima al-Ma'suma (a) and know more about the Islamic seminary of Qom. He stayed in Qom for some months during which he heard about the death of his masters in Najaf one after another. Thus he decided to permanently stay in Qom where he became a marja' (a Shiite authority) years later. 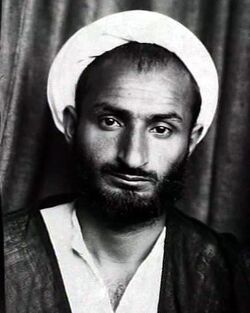 Ayatollah Bahjat when he was 29 year old, in Najaf, before going back to Iran

Teachers at the seminary of Najaf:

Teachers at the Islamic seminary of Qom:

Ayatollah Bahjat's style of teaching was different from that of his contemporary scholars. According to Ali Akbar Mas'udi Khumayni, unlike other scholars who mention other scholars and then defend or criticize them, Bahjat never mentioned other scholars; he just described their views without mentioning their names. Thus a pupil needed to already know the views in the literature so that he could understand the scholar to whose view Ayatollah Bahjat was referring.

Ayatollah Bahjat wrote some works in jurisprudence and principles of jurisprudence that have not yet been published. Some people suggested to Bahjat that they would fund for the publication of his works, but he replied: "there are still many manuscripts by early scholars that have not been published yet; you had rather fund for their publication. It is not too late for the publication of my works".

Bahjat started writing when he was young; he helped Shaykh Abbas Qumi in the writing of Safinat al-bihar. Much of the manuscript of this book is written by Ayatollah Bahjat.

Since his teens, Muhammad Taqi Bahjat was attentive of mystical and moral issues. His conception of pure mysticism was in terms of submission to God. Some great scholars, such as 'Allama Tabataba'i, Sayyid Rida Baha' al-Dini, Ayatollahs Ali Quddusi, Hasan Zade Amuli, and 'Abd Allah Jawadi Amuli, used to attend his congregational prayers, especially at Thursday nights. He cried out of piety in his prayers.

Until his death, he lived in an old house near the Fatimiyya mosque in Guzar Khan district in Qom. Every morning, after his morning prayers and near the sunrise, Bahjat went to the Holy Shrine of Fatima al-Ma'suma (a) and worshiped in Shahid Mutahhari mosque in the shrine.

Ayatollah Bahjat published his Risala very late. He had asked his friends to wait until other scholars published their fatwas. After that, if there were still people who did not want to follow those scholars as Marja' and just wanted to follow Bahjat, then he would publish his fatwas.

From the Viewpoint of Other Scholars

Ayatollah Bahjat has given many ethical instructions which are focused more than anything else on performing religious obligations, avoiding religious prohibitions, and behaving in accordance with Islamic maxims.

Here are some of his instructions:

The Islamic government during the Major Occultation

Ayatollah Bahjat had important positive views about politics. With regard to governments during the period of the Major Occultation, he says that it is an obligation to create an Islamic government and we have the ability to administer the country. He emphasized the formation of an Islamic government during the Major Occultation, provided that all divine laws are performed, and are never suspended on pragmatic grounds. Unlike scholars who held that before the Reappearance of Imam al-Mahdi (a), social and political responsibilities of the Infallibles (a) should be kept in suspense, Bahjat believed that during the Major Occultation, Shi'as should be politically active. Thus he considered it as an obligation for some believers to carry out such political tasks. His argument was based on the assumption that there are rational and religious reasons to the effect that Islam should remain alive until the Day of Judgment, and no religion except Islam is accepted by God.

Ayatollah Bahjat and the 1979 Revolution

Though there is no trace of Ayatollah Bahjat in the documents regarding the Islamic Revolution of Iran in 1979, he was always a supporter of the Revolution and was influential on some clergies who joined the Revolution. In the early 1960s, he emphasized that Pahlavi was destroying the religion. One day someone asked him: "Is it not probable that Ayatollah Khomeini is being too radical against the Shah?" Bahjat replied: "Is it not probable that he is being too modest?" Muhammad Hadi Fiqhi says, when Ayatollah Khomeini went on exile, he said in his lectures: "Is there no one to kill these governmental authorities?" Moreover, he always had friendly relations with Imam Khomeini and exhibited good will to him and the Revolution. Gravestone of Ayatollah Bahjat, inside the Holy Shrine of Lady Fatima al-Ma'suma (a)

Ayatollah Muhammad Taqi Bahjat died of a heart attack on Sunday afternoon, May 17, 2009 in Wali 'Asr (a) Hospital in Qom, and he was buried inside the Holy Shrine of Fatima al-Ma'suma (a).

For more about Ayatollah Bahjat, see the following books: