From WikiShia
(Redirected from Murtada Mutahhari)
Jump to: navigation, search

Mortezā Moṭahharī (Persian: مرتضی مطهری, b. 1338/1920 - d. 1399/1979) was a prominent shi'a jurist, philosopher, theologian, thinker, and writer of the twentieth century. He was a student of Allamah Tabataba'i and Imam Khomeini and was considered to be one of the most influential contemporary Iranian clerics in expounding upon Islamic teachings, in keeping pace with the need of the time. Before the Islamic Revolution, Motahhari's intellectual struggle against the Marxist movement in Iran played a stellar role in turning away the youth from its ideology. He was one of the founders of Husayniyya-yi Irshad, a significant center for propagating Islamic teachings before the revolution. Elucidating Islamic beliefs and acting according to the need of the time were the characteristics of Motahhari's intellectual activities. Motahhari presented Islamic concepts that were earlier dealt with in a complicated manner in a simple and easy manner in his own personal style. His books on different topics have been repeatedly published in Persian and other languages. Motahhari is considered an influential person and an intellectual leader of the Islamic revolution of Iran.

Motahhari was born on Jumada I 13, 1338/February 3, 1920 in Fariman in one of the cities of Khorasan.[1] His father, Muhammad Hasan Motahhari, was a well-known cleric of the locality.[2] He studied in the Islamic seminary of Mashhad from the age of thirteen and, after four years of education there, entered the Islamic seminary of Qom. He attended Ayatollah Burujirdi's lessons for eight years and that of Ayatollah Khomeini's for twelve years.[3]

He met with Hajj Mirza 'Ali Agha Shirazi during his travels to Isfahan (1320 Sh/1941-42). This acquaintance laid down the foundation for him to start his expansive research on Nahj al-Balagha and culminated in his writing the book Glimpses of Najh al-Balagha. He was acquainted with Ayatollah Tabataba'i from 1329 Sh/1950-51 and formally studied under his presence for three years. Still, his relationship with him continued until the end of his life.

Motahhari moved to Tehran in the year 1331 Sh/1952-53 and taught at Sepahsalar School (present-day Shahid Motahari University) and Marvi School. He published his first work, i.e., the book Principles of Philosophy and the Method of Realism in 1332/1953-54. He commenced his teaching at the Faculty of Theology and Islamic Studies, the University of Tehran, from 1334/1955-56.[4] In the course of these years, Motahhari had a close relationship with the group "Fada'iyan-i Islam" and used to give them his advice.[5]

On 15th Khordad 1342/5th June 1963, after the arrest of Imam Khomeini over the peoples' objections on the Pahlavi reign, Motahhari was imprisoned along with other clerics and was released after 43 days.[6] After the uprising of the 15th Khordad, he started assisting Jam'iyyat Mu'talifa Islami.[7] 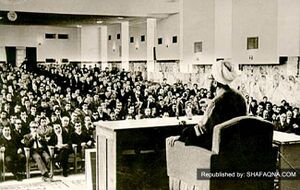 One of the important activities of Motahhari was building the Irshad religious center with the help of some friends in the year 1346/1386-1387.[8] On the Day of Ashura of 1390 AH/18 March 1970, which corresponded to Isfand 1348, Motahhari gave a speech against Zionism, resulting in his arrest.[9] In 1349/1970-71, he was arrested for inviting people to gather help for the homeless Palestinians and was subjected to investigation.[10] In 1350/1971-72, he was arrested by SAVAK for working in association with the Irshad religious center. He withdrew himself from the Irshad center in the year 1349/1970-71 for certain reasons.[11]

In 1355/1976-77, the regime of the Shah retired Motahhari from the Faculty of Theology and Islamic Studies, the University of Tehran, under the pretext of disagreeing with a communist professor from the same university.[14] In the same year, with the help of a few companions in Tehran, he founded the Association of the Resistant Clergy of Tehran (Jami'iyi Rawhaniyyat Mubariz-i Tehran). He also met with Imam Khomeini by journeying to Najaf.[15] 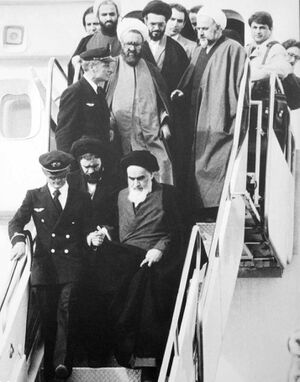 Motahhari with Imam Khomeini returning from Paris in 1399/1979

In 1356/1977-78, Motahhari held an important role in commemorating the fortieth day of martyrdom of Mustafa Khomeini in the Mosque of Ark, Tehran. In a letter addressed to him, Imam Khomeini asked him to thank all those present in the Mosque of Ark.[16] After the escalation of the Iranian peoples' struggle against the Pahlavi reign in the year 1357/1979 and after the regime's shifting of Imam Khomeini to Paris, Motahhari visited Paris and took over the responsibility of forming the Council of the Islamic Revolution from Imam Khomeini.

Morteza Motahhari was returning from a gathering at night on Jumada II 3, 1399/May 1, 1979 when he was assassinated by the terror group Furqan, and thus attained martyrdom.[17] Imam Khomeini issued a special message for the people upon his martyrdom.[18] 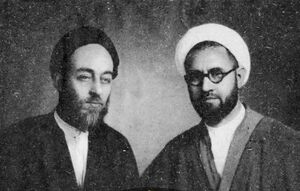 Motahhari and his teacher, Allama Tabataba'i

Motahhari, in his speeches and works, often expressed that he was indebted to his father, Imam Khomeini, Allamah Tabataba'i, Ayatollah Burujirdi, and Mirza Ali Shirazi for all his learning and achievements.

Motahhari speaking of Imam Khomeini, said, "After moving to Qom, I found my lost self in his personality." He attributed his spiritual ecstasy to attending the moral lectures of Imam Khomeini to the extent that he used to be influenced and inspired by them for days to come.[19] Motahhari studied under this great teacher for 12 years and credited a great part of his personality to be cultivated by these moral lectures and various other lectures imparted by him.[20].[21] He described Imam Khomeini as a divine teacher and always considered himself indebted to him. His teacher's charisma so besotted Motahhari that he considered his meeting him in Paris to be the cause of the increase in his faith and reverence.

Motahhari speaking of his teacher Sayyid Muhammad Husayn Tabataba'i, says, "Our respected teacher Allamah Tabataba'i (may I be sacrificed for him) is truly a man who has rendered great, great service to Islam… I have benefited from his spiritual presence through long years and continue to do so."[22]

Another teacher to have largely influenced him was Mirza 'Ali Agha Shirazi. Motahhari describes him to be one of the greatest men he ever met in life. In his view, Shirazi was a great example in piety, worship, and conviction. Motahhari first met Mirza 'Ali Shirazi in the summer of 1321/1942 during his journey to Isfahan. In his own words, this acquaintance turned into a deep dedication from Motahhari's side and fatherly love and affection from Shirazi's side. Motahhari regarded the exchanges between him and this great man to be a great spiritual treasure. Motahhari elsewhere also mentioned that his conversations with Mirza 'Ali Shirazi were so firmly etched in his mind that not a day or night passed by without him remembering and talking about him and benefiting from his memories.

Motahhari worked very hard to ascertain and determine the Shi'a ideology and belief system and published many works. In this field, he also voiced his own special views, which, at times, were not in harmony with the prevalent Shi'a beliefs and were in disagreement with a few clerics.

Motahhari published the book Hamasa Husayni criticizing the prevalent, popular beliefs surrounding 'Ashura, mourning ceremonies and even the history of 'Ashura. He, in his book, refuted some famous narrations like the wedding of Qasim b. al-Hasan in Karbala[23] and was skeptical about the existence of a girl child named Ruqayya.[24]

He believed that the peoples' beliefs regarding the Event of Ashura have been spiritually distorted and most people, instead of modeling Imam al-Husayn (a), believe that Imam al-Husayn (a) was martyred in order to grant them paradise.

Motahhari, in his book Mas'ala-yi hijab (translated into english under the title on the Islamic hijab), expressed his opinion about the hijab in a more easy-going fashion which led to criticism by certain clerics. He addressed some of these criticisms in the later editions of his book.

Prior to the Islamic revolution in Iran, religious literature was scarce and old-fashioned; it addressed matters in a complicated and outdated manner that did not match the new generation's taste. Most of these writings disregarded the need of the time of the audience and used complicated prose. Motahhari, who was aware of this climate in society as he frequented the college arena, persevered in order to create a new atmosphere in religious literature.

By authoring books such as Dastan-i Rastan he presented religious and moral traditions to the audience in the form of captivating Persian stories. On the other hand, he wrote on subjects like jurisprudence, mysticism, and Islamic philosophy in a simple and easy language for all. He addressed these topics in books like Introduction to Islamic Sciences which catered to the students and the learned alike.

The book Dastan-i Rastan, with its numerous reprints, proved that religious and historic traditions could be adapted into a modern-day language free from complicated jargon. Motahhari's easy style of writing and explaining Islamic beliefs in clear Persian language set an example for future writers after the revolution.

The number of his written works was more than 70 titles. Some of his works were published and distributed during his lifetime by Sadra publications, while some others were published after his martyrdom. Another part of his works consists of lectures and lessons delivered by him that were extracted from audiotapes and then printed and published in written form. Similarly, a collection of his books is published in 28 volumes classified by their topics.

Besides his published works, approximately thirty thousand of his notes and research slips are present.

Shahid Motahhari's books possess some exclusive characteristics, which result in multiple reprints and editions. Some of these characteristics are: being usable for everyone from different educational backgrounds, variety, and diversity of topics, attention to the need of the society, attention to the various dimensions of one topic, etc. Imam Khomeini, without exception, recommended all of his works, and Ayatollah Khamenei, the successive leader of the Islamic Republic of Iran, dubbed his works to be the ideological foundation of the Republic of Iran.

Imam Khomeini: I cannot express my feelings and emotions for this dear person. That which I must say is that he has been of valuable service to Islam and knowledge and it is very unfortunate that this fruit-bearing tree was snatched away from the field of knowledge and Islam by terrorists. Motahhari was a dear child to me and a strong backbone of the religious and learning arena. He was a beneficial helper to the country and nation. In his short life span, he provided ever-lasting works that reflected his awakened consciousness and soul that was full of love for writing.

Allama Tabataba'i: Motahhari had an extraordinary intellect and words were not lost on him. He understood what was said to him and stored it in his memory. Apart from piety, humanity, and other moral dimensions that he rightly possessed, he had a brilliant memory and whatever was taught to him was never rendered useless, I was certain that it would never be rendered useless.

Ayatollah Sayyid 'Ali Khamenei: Few people and fewer thinkers with such excellent spiritual and intellectual capabilities like that of Shahid Motahhari can be found. Each of the lectures of this beloved martyr can be considered a specialized work. Therefore it is befitting that more work should be done on his ideological foundations and brand of philosophy. The writings of Shahid Motahhari laid the basis and foundation of the Islamic Republic of Iran's system.

Motahhari held such a distinct position that hundreds of books, dissertations, articles about his life, and his works were written after his martyrdom. Several conferences examining the different dimensions of his ideology have taken place.

The publication of books about Motahhari and his works still continues in Iran's intellectual and educational arena. Therefore, it isn't easy to furnish the full appendix of this work. In the book named The Descriptive Bibliography of Professor Shahid Motahhari, 214 books were mentioned to have been written on Motahhari. This book was published in the year 1383/2004. In the following years, several other books have been published.[25]

Chandeliers of Wisdom (Chelcheraghe Hekmat) is a collection that has tried to categorize the ideology and thought of Motahhari topic-wise. This collection has forty volumes.