Abū l-Qāsim Findiriskī (Persian: ابوالقاسم فندرسکي), known as Mīr Findiriskī (Persian: میر فندرسکی ) (b.~970/1562- d. ~1050/1640), was a philosopher and a scholar of the Safavid period; he was a well-known philosopher of Isfahan School and was contemporary with Mir Damad and Shaykh Baha'i. He mastered the disciplines of his time, in particular geometry, mathematics and alchemy.

Mir Findiriski's father was a prominent sayyid (progeny of the Prophet (s)) in Astarabad, and his grandfather Mir Sadr al-Din was a landowner in Findirisk, a city near Astarabad; he joined the court of Shah 'Abbas I upon his accession of the throne in 995/1587. His father, Mirza Bayk, also worked in Shah 'Abbas's regime and was highly respected.

Abu l-Qasim was born in the small city of Findirisk. It seems that he learned the preliminary materials there, but he then went to Isfahan to study under 'Allama Chalabi Bayk Tabrizi (d. 1041/1631) who was a student of Afzal al-Din Muhammad Turka Isfahani. Later, he started teaching in Isfahan.

It seems that the intellectual atmosphere of Iran in those days did not fit his liberal spirit. This is why, like his master Chalabi Bayk Tabrizi and many other scholars and artists, he migrated to India.

India was an attractive place for people from other areas at the time because of Akbar Shah and his policy of "peace with all" and because of its economic prosperity and social security; India was a pleasant place for liberal people because it enjoyed a great diversity of religions and sects and was void of any religious bias.

According to Awhadi, when Mir Findiriski arrived in India he became close to Mirza Ja'far Asif Khan (b. 958/1551 - d. 1021/1612) who was an Iranian poet who had migrated to India and had become a chancellor or a minister there. Asif Khan facilitated Mir Findiriski's return to Iran.

The Second Travel to India

Mir Findiriski soon decided to travel to India again; he first went to Gujarat and then to Deccan. At the time of writing his 'Arafat al-'ashiqin (from 1021/1612 to 1024/1615), Awhadi writes that Mir Findiriski frequently traveled to India throughout his life. It seems that once Abu l-Hasan Isfahani helped Mir Findiriski to meet Shah Jahan once in 1037/1627 and once again in 1046/1636.

Mir Findiriski was also respected by the Iranian monarchy. According to Nasrabadi, once when he returned from India to Isfahan, Shah Safi visited him. 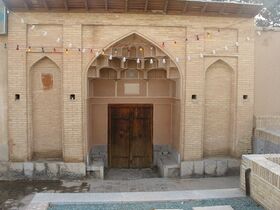 The entrance of a takya in Isfahan named after Mir Findiriski.

He died in 1050/1640 in Isfahan. He was buried there in the mausoleum of Baba Rukn al-Din where is now known as Takht-i Fulad Cemetery and Takya Mir.

Mir's tomb has always been respected and frequently visited by people in Isfahan. It has been said that his stock of books has been dedicated to the Royal Library of Shah Safi, in accordance with his will.

There is not much information about his personal life, and it is not known who his descendants are. His only descendant that we know is Mir Abu Talib b. Mirza Bayk who was a pupil of al-Allama al-Majlisi—he was a poet and has left many works. His progeny has lived in Astarabad until recently.

Mir Findiriski was contemporary with Mir Damad and Shaykh Baha'i, and some great philosophers of that time have been his students, such as Mulla Sadiq Ardistani, Muhammad Baqir Sabziwari, Aqa Husayn Khwansari, Mirza Rafi'a Na'ini, and Mulla Rajab Ali Tabrizi.

Some people have named Sadr al-Din Shirazi—the well-known philosopher of the Safavid era—among Mir Findiriski's students. But Sadra has never mentioned him in his works, though he did mention the other two of his teachers, Mir Damad and Shaykh Baha'i.

The Influence of the Indian Culture

Some people maintain that Mir Findiriski's thoughts are influenced by the intellectual and cultural atmosphere of India. It seems that his philosophical thoughts are shaped by the scholarly debates of India at that time.

Though Mir Findiriski has not left many works, the epigraphs on his tombstone are evidence that he was highly respected by the scholars and the laymen in his time—people regarded highly of him not only in philosophy, but also in mysticism.

Another piece of evidence for his fame and high status are the stories regarding him that express his acts of wonder.

There are stories of his keenness, cleverness, self-esteem, and courage—his keen responses to the cavils of governors and kings—showing his keen mind, astuteness, moral courage, and liberality. It has been said that once in a meeting, he was asked about a geometrical problem according to the theory of Khwajih Nasir al-Din Tusi. Mir Findiriski raised an argument regarding the problem, and asked whether Khwajih has mentioned the argument. People said that the argument was not mentioned in Khwajih's work. He then raised several other arguments and asked the same question, and the answer was negative. Mir was briefly mentioned in some biographical works showing that he had a very simple life. He avoided fame and official positions, overlooked this-worldly affairs, and did not avoid the companion of laymen and even hoodlums.

An Expert in Various Disciplines

Mir Findiriski was an expert in various disciplines of his time, especially in geometry, mathematics and alchemy—there are works purportedly written by him concerning these issues. The works of Mir available to us today and the views and works of his pupils show that he was a great teacher of the Islamic Peripatetic philosophy and taught Ibn Sina's books. However, he occasionally objected to the views of Ibn Sina and Khwajaih Nasir al-Din Tusi—two prominent Peripatetic philosophers.

Mir Findiriski has left some short essays in philosophy, some commentaries on the Hindu Jug Basisht, and some peoms:

In some biographies, other essays are attributed to Mir Findiriski, such as The history of Safavid Monarchy, Tahqiq al-mazilla and some other essays, none of which are available to us today.

In most biographies, some poems of Mir Findiriski are quoted. What is left to us today are two qasidas, some ruba'is and some verses. Here are the beginning verses of his best-known qasida with an English translation: