Mullā Ismāʿīl b. Muḥammad Samīʿ Darbkūshkī Isfahānī (Persian: اسماعیل بن محمدسمیع درب کوشکی اصفهانی) (d. about 1240/1825), known as Wāḥid al-ʿAyn, was a philosopher and a teacher of philosophy and theology of 13th/19th century. He was a student of Mulla 'Ali Nuri. Mulla Hadi Sabziwari is one of his eminent students. Works such as: al-Hikmat al-'arshiyya and gloss on al-Asfar (written by Mulla Sadra) have remained from him. His participation along with his students in Mulla 'Ali Nuri's class is counted as his notable characteristic.

His birth date is not known. Little information has been reported from his life in biographical books.

He was nicknamed Wahid al-'ayn (one-eyed) because one of his eyes was visually impaired. However, Mulla Hadi Sabziwari nicknamed him as Dhu l-ʿUyūn (who has eyes) or Dhu l-ʿAynayn (who has two eyes) because he had open eyes in both intellectual and narrative sciences.

Also, he was Shaykh Ahmad Ahsa'i's contemporary. He attended Ahsa'i's sessions once and defeated him in a debate about knowledge.

Mulla Isma'il's students, who participated in Mulla 'Ali Nuri's class, preferred Mulla Isma'il's philosophy class; because he was explicit and eloquent in his speech and used verses of the Qur'an, hadiths, and poems to explain the topics and convince his students. On the other hand, Mulla 'Ali –especially at the end of his life- was more cautious in his philosophy class and avoided explicit explanation of topics and subjects.

It should be pointed out, that there is one of his students with exactly the same name "Isma'il Darbkushki Isfahani". Some have considered them as one person due to this similarity, but the student was a son of Muhammad Ja'far while the teacher is a son of Muhammad Sami'; also the student passed away in 1304/1887 while the demise of the teacher is reported decades earlier. 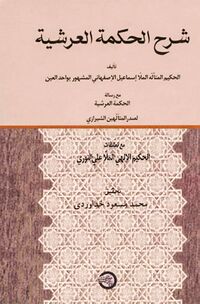 He has written glosses on important philosophical and theological books, such as:

There are different reports about his demise date. Some say that he passed away after Mulla 'Ali Nuri (d. 1246/1830) in 1271/1855 or 1277/1860 or 1281/1864, but all of these dates are just guesses and assumptions without any definitive evidence. Sayyid Jalal al-Din Ashtiyani apparently by referring to Sabziwari's son-in-law, and also according to his teachers that Mulla Isma'il was in Tehran while Mulla 'Abd Allah Zunuzi (d. 1257/1841) was alive, came to this conclusion that Mulla Isma'il was certainly alive in 1267/1851.

However, what Mulla Hadi Sabziwari has said in his autobiography is noteworthy. He said that after the demise of Mulla Isma'il he studied philosophy for three years under Mulla 'Ali Nuri. According to this, one can conclude that Mulla Isma'il passed away in 1239/1824 or 1240/1825, a few years before Mulla 'Ali Nuri's demise.