From wikishia
(Redirected from Khorasan) 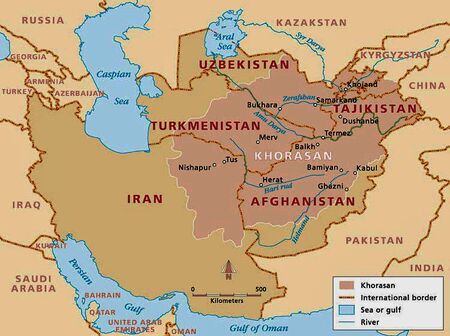 Greater Khorasan, the term was used to refer to a broad area encompassing not only current Khorasan provinces in Iran, but also all eastern lands stretching from Rey and the Great Desert to today's Afghanistan and even the upper Indus Valley and the Indus river in today's Pakistan, during the Sassanid and early Islamic era. Today the term "Khorasan" refers to a province in Iran which was recently subdivided into three provinces (Razavi Khorasan, North Khorasan, and South Khorasan) since Rabi' II 9, 1425/May 29, 2004.

Greater Khorasan is a historical land covering parts of Eastern Iran, Afghanistan, Pakistan, Turkmenistan, Tajikistan, Uzbekistan, and Kyrgyzstan. It is also a province in Iran that has been reshaped into three provinces (Razavi Khorasan, North Khorasan, and South Khorasan) since Rabi' II 9, 1425/May 29, 2004.

In the Sassanid era and the early Islamic period, Khorasan was a very vast area that formed not the present-day Khorasan provinces in Iran, but also all the Eastern lands from Rey and the great desert to present-day Afghanistan and even the upper Indus Valley and Pakistan. In some periods, Khorasan also included Transoxiana and Khwarazm, that is, parts of present-day republics of Turkmenistan, Uzbekistan, Tajikistan, and Kyrgyzstan.

During the Sassanid era, Khorasan was one of the four main provinces in their realm. The province was governed by a commander from Merv. Merv was generally the furthest stronghold of the Sassanid kingdom, but in their military invasions, Sassanid armies usually moved ahead and beyond the area. According to al-Tabari, Ardashir Babakan led his army to Gorgan, Khwarazm and Takharistan. At then, most local princes in this area were taxpayers of the Sassanid kingdom who later enjoyed their independence once the kingdom collapsed by Muslim attacks.

In the Sassanid period, Khorasan was divided into four parts, therefore had four margraves. Each of the four parts was known by its throne: Nishabur, Merv, Herat, and Balkh.

The rule of Muslims in Khorasan in late 1st/8th century was established and reinforced by the appointment of rulers such as Ziyad b. Abih, al-Muhallab b. Abi Sufra, Qutayba b. Muslim in the Umayyad period. Many Arab tribes, both northern or Qaysi tribes (such as Bakr and Tamim) and southern or Yamani ones (such as Azd), began to immigrate to Nishabur, Tus, Merv, and Herat. They established local relations and interests. By 112/730, there were as many as 40,000 Muslims in Khorasan most of whom were Arabs. The unfavorable aspect of this peaceful immigration process was the carrying of ancient tribal hatreds ('Adnani vs Qahtani) from Syria and Iraq to Khorasan, which led to splits and undermining the last Umayyad rulers when they encountered the increasing power of the Abbasids.

Such quarrels, between Arab people, undermined the place of the last Umayyad ruler of Khorasan, Nasr b. Sayyar al-Laythi (120/738, 130/747-748) in his struggles against the increasing power of Abu Muslim al-Khurasani's movement.

The Abbasid movement made many people of Khorasan, both Arabs and Iranians, move to the west, that is, to Iraq wherein the first Abbasid caliphs settled. Members of the Barmaki family from Balkh were among people who moved to the west. Khalid b. Barmak joined the Abbasids, and the caliph, al-Saffah, offered him the position of supervising the financial resources of the army. Thus this important position was occupied by Barmakis for a short time. Many guards and officials of Khorasan resided in the Harbiyya district of Baghdad and its northern parts, and their number increased when al-Ma'mun defeated his brother, al-Amin, in the fight over the throne, and in 204/819-820, he moved with many of his companions from Merv to Baghdad.

Al-Ma'mun appointed his army's commander, Tahir b. al-Husayn Dhu al-Yaminayn, as the ruler of Khorasan, and the Tahirid dynasty faithfully served the Abbasids for 50 years. As rulers of Khorasan, the Tahirids were defenders of Sunni school of thought and resisted uprisings or movements. Khorasan flourished and thrived under the Tahirids.

The Tahirid rule in Khorasan was overthrown by Ya'qub b. al-Layth al-Saffari in 259/872-873 when he entered Nishabur, the capital of the Tahirids. For the next decade, Khorasan was in a state of turmoil because of fighting between Saffarids and local military commanders over the rule of Khorasan until Isma'il b. Ahmad al-Samani defeated Ya'qub's brother, 'Amr b. al-Layth in 287/900. Khorasan was then ruled by Samanids for about one century (287/900, 389/998-999).

Although the Samanids were agents of the caliphate, just like the Tahirids, the distance between their capital (Bukhara) and Baghdad (the capital of the Abbasid caliphate) gave them the chance to rule as independent rulers. Khorasan was considered as a powerful center for kalam and other Islamic disciplines of Sunni Muslims.

After the Samanids, Khorasan was ruled by the Ghaznavids from 4th/10th to 6th/12th. The province of Khorasan was far from their capital, Ghazni, in the Eastern Afghanistan, but it was a significant province for them because it was wealthy and paid a great deal of tax to them which were essential for the Ghaznavid army. However, the austere tax policies of the Ghaznavids led to dissatisfaction among people of Khorasan. As a result, when in the third decade of the fifth/eleventh century, some groups of Turkomans attacked Khorasan under the command of the Seljuqs and disturbed commercial transfers, people in cities such as Nishabur, Merv, and Herat considered Seljuqs as less evil in comparison to Ghaznavid tax collectors.

The victory of the Seljuqs over the Ghaznavids terminated the latter's rule in the west of the central mountains of Afghanistan forever. Although Tughril Beg moved his capital from Nishabur to the west, that is, Rey and Isfahan, and appointed his brother, Chighri Beg, as the ruler of Khorasan, it still remained an important province during the Seljuqs.

Under the rule of Alp Arslan (455/1063, 465/1072-1073) and his son, Malik-Shah (465/1072-1073, 485/1092-1093), Khorasan was stable and peaceful, but it was politically and socially disordered during decades of quarrels among the successors of Malik-Shah, due to the raids of some militias in the cities, sectarian wars among Hanafis, Shafi'is, and Karramis, and violence of Isma'ilis. Under the rule of Sanjar b. Malik-Shah (511/1117-1118, 552/1157-1158) stability and peace came back in Khorasan and its cultural life thrived. Many qualified agents and officials of the Turk sultans were from Khorasan, such as Khwaja Nizam al-Mulk al-Tusi, the prime minister of Alp Arslan and Malik-Shah. Nizam al-Mulk founded many schools in Nishabur, Merv, Herat, and Balkh.

Oghuz Turks who thought that they were marginalized by the central Seljuq government, overthrew Sultan Sanjar's government. During the next decades, the province of Khorasan underwent turbulent periods because Oghuz rulers and former Seljuq commanders tried to exercise their powers, and Kara-Khanids in Transoxiana interfered in the quarrels between Khwarazmians and the Ghurids over the rule of Khorasan. It seems that the victory of Khwarazmians in the early 7th/13th century through the dominance of 'Ala' al-Din Muhammad Khwarizmi over many areas of Iran and central Asia occurred when the Moguls entered the Islamic lands.

The Moguls set foot in Khorasan in 617/1220-1221. They removed Jalal al-Din of Khawrezm (d. 628/1230-1231), destroyed the cities and villages, and massacred people. Even if the number of casualties, reported by historians such as Ibn al-Athir and al-Juwayni, is just exaggerated (e.g. 700,000 people in the city of Merv, and 1,300,000 people for the whole area of Merv), it is obvious that Khorasan was more devastated by the Moguls than by the Oghuz attacks.

The tax system of the Moguls imposed a great amount of pressure on Khorasan, leading to its economic decline. Many economic centers of Iran were destroyed then. The Moguls Ilkhanates settled in Northwestern Iran as their capital. Azerbaijan and Jibal turned into the most active cultural centers then. Herat was culturally inactive up to late 8th/14th century, until it turned into an active intellectual and artistic center.

With the death of Abu Sa'id, the last influential Ilkhanate, in 736/1335-1336, and before the emergence of the Timurids, some local dynasties struggled to take over Khorasan for decades. Kuts who had Ghurid Afghan origins ruled over East Khorasan since 643/1245-1246 and their capital was Herat. In about 60 years later, in the 8th/12th century, Sarbadars took over the local power. They resided in Sabziwar as their capital city. Their power sometimes extended to Damghan in the west and Nishabur in the east. Both powers were overthrown before the emergence of Timur. Timur settled in Samarqand as his capital, but he assigned the rule of Khorasan to his son, Shahrukh. Shahrukh was in power there until his death (850/1446-1447) for fifty years. Cities such as Merv and Herat were revived, and during the Timurids, Khorasan enjoyed political stability, developments in agriculture, and flourished in arts.

In the turn of the 9th/15th century, though the Safavids took over most parts of Iran, there still were quarrels over the rule of Khorasan with Uzbeks of Transoxiana under the command of the Shyabanids. In 916/1510-1511, Shah Isma'il killed Muhammad Khan al-Shaybani and extended the Safavid rule to Khorasan. However, Safavids could not conquer Balkh. The war in this territory continued, and the rule of border cities, such as Nasa and Merv, shifted between the Safavids and the Shaybanids.

In the 12th/17th century, when the Safavid government was overthrown, tribes were revived and Afghans attacked Iran. Mashahd in Khorasan became the capital of Nadir Shah Afshar and his military site was in Kalat Nadiri near Mashhad. After Nadir's death in 1160/1747, Khorasan was taken over by the Afghan commander, Ahmad Shah Durrani, from its west to Nishabur. Durrani's main concern was to conquer Afghanistan and India, this is why he assigned puppet Afsharid rulers, particularly Nadir's grandson, with the rule of Khorasan.

In 1210/1795-1796, Agha Muhammad Khan Qajar conquered Mashhad without any wars, and terminated the rule of Shahrukh Afshar.

Occupation of Central Asia by Russians

Khorasan was completely controlled by the central government of Qajar in Tehran, but for nearly one century, people's lives there (especially in the northern borders of Khorasan) were threatened by plunders of Uzbeks and Turkomans of Yamut and Guklans, who caused trouble for both agriculture and commerce. The quarrels finally came to an end only with the occupation of Central Asia by Russians.

The north of Khorasan (Merv, Samarqand, Bukhara, and Khwarazm) were also attacked by Russians and Turkomans in the Qajar era, and in 1299/1881-1882, they were isolated from Iran by the Treaty of Akhal between Iran and Russia, according to which the Atrak river marked the border of Iran.

The undisputed power of Russians forced Iranians to lose their control of Merv in 1301/1883-1884, while relations with Afghanistan were still hostile because of disputes over the control of Herat.

Separation of Afghanistan from Iran

Herat, under the rule of the Afghan commander, Yar Muhammad, resisted the long siege by Muhammad Shah's army in 1253/1837 and 1254/1838, and once again when Herat was temporarily conquered during the rulership of Nasir al-Din Shah a short war occurred between Iran and Britain. According to the Paris Treaty—which ended the disputes—Iran withdrew its claims to Herat and other areas of Afghanistan, and thus Iran's efforts to conquer the eastern areas of Khorasan (the western areas of Afghanistan) did not succeed, though quarrels on the borders of Iran and Afghanistan (in Khorasan and Sistan) continued until early 14th/19th century.