From WikiShia
(Redirected from Transoxiana)
Jump to: navigation, search 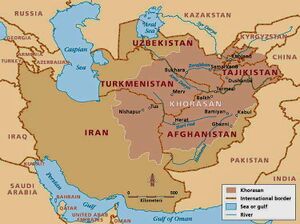 Māwarāʾ al-Nahr (Arabic: ماوراء النهر) or Transoxiana was the name of a vast land in the east north of the plateau of Iran, which is now also called Central Asia. This region became known as Mawara' al-Nahr, after it was conquered by Muslims. The religion of most of its people before Islam was Zoroastrianism. Islam quickly spread in this land and this region could become the pole of Islamic culture and civilization in a short time. Some of its important cities were Merv, Balkh, Bukhara, Samarqand, etc.

This region became an appropriate place for Shi'a since the 2nd/8th century due to its distance from the center of Abbasid caliphate. Mawara' al-Nahr introduced great scholars to the world of knowledge, among whom there are scientists and scholars such as al-'Ayyashi, al-Kashshi, Abu 'Ali Sina (Avicenna), al-Farabi and others. Governments such as Samanids, Kara-Khanids, Ghaznavids, Seljuks, etc. ruled over this region, some of which such as Samanids played a great role in spreading Islamic science, culture and civilization.

Mawara' al-Nahr is a vast region in Central Asia in the north east of the plateau of Iran. The history of its naming dates back to after the entrance of Islam to this region. After taking this region by Muslims, it was called Mawara' al-Nahr ("beyond the river"), because it was across "Amu Darya" (Jayhoun) River. It became famous as one of the eastern territories of Arab Muslims or the "Fourth Quarter of Khorasan".

Some believe that this region was once a fully developed region and no uninhabited place could be found anywhere in that region and the best of water and soil could be found there. Some important cities of this region were Samarkand, Bukhara, Balkh, Khujand, Termez, Khwarezm, Merv, Sogdia, Tashkent, Kesh (Shahresabz), Tokharistan, Sijistan, Urgench, etc. Some sources mentioned different regions in Mawara' al-Nahr and some other researchers discussed the geographical divisions of this region in details.

This region has a pre-historic civilization background. According to historical documents, in the historic period, it was under the influence of different governments such as Achaemenids, Seleucids, Parthian, Scythians, Kushans, Hephthalites, Turks and Sasanids; and thus, it had an important role in important political, cultural and social developments in the history of Iran and the world.

Some believe that it was where Zoroaster emerged and even some considered Balkh as his birth town where he passed the first stage of his life, as before the invasion of Arabs, there were many fire temples in Bukhara which was one of the biggest cities of Mawara' al-Nahr and also in the other cities of that region. In that region, there was a great religious toleration and therefore, the absence of any dogmatic religious sect there made refugees of different creeds to choose that region for living. This made that region a center for exchanging beliefs and different religions.

Three years after the conquest of Merv by Muslims, the first attacks to this land began, until in 85/704 after Qutayba b. Muslim al-Bahili became the governor of Khorasan and could conquer most or all of the cities of this region one after another. This region became known as Mawara' al-Nahr after it was conquered by Arabs.

Islam spread in this region so that it could emerge as a scientific and cultural center against Baghdad and even some of its cities including Samarkand and Bukhara became famous as two important centers which could even be compared to Baghdad. For five centuries, this region was the greatest cradle of Islamic civilization and the center of Iranian governments. Mawara' al-Nahr was the birth and burial place of many great Islamic scholars.

Presence of 'Alawi Sayyids and Shi'a

Since the 2nd/8th century, Mawara' al-Nahr was considered an appropriate place for Shi'a. It was considered so, because it was far from Arabic and 'Abbasid center of caliphate and also because the enemies of Shi'a did not have access to them. The remarkable presence of 'Alawis in this region dates back to 3rd/9th and 4th/10th centuries. That might be because of Samanids' religious zeal which led to inhabitation of Sayyids and Shi'a in that region with perfect security. Seljuks' dogmatic encounter with Shi'a can be considered among other reasons of the emigration of Shi'a, especially 'Alawis in 5th/11th and 6th/12th centuries.

Most people of Mawara' al-Nahr, especially in 6th/12th century, were Hanafi Sunnis who acknowledged the great position of the Ahl al-Bayt (a) of the Prophet (s). Shi'a were very active in that region. In his book of Ansab, Fakhr al-Din al-Razi reported about the existence of a large group of 'Alawi Sayyids in that region. Some others reported about the transmission of hadiths in gatherings in Mawara' al-Nahr and in the mourning ceremonies of the Day of 'Ashura and believe that the significant presence of Shi'a in this region can be proved; as the poems composed in praise of the Ahl al-Bayt (a) by famous poets such as Suzani Samarqandi, Sabuni Kashshi and others available in literary texts of that period can be referred to as evidences.

One of the important centers of Shi'a in Mawara' al-Nahr was the city of Samarqand. Muhammad b. Mas'ud al-'Ayyashi was among distinguished Shi'a scholars who established an active scientific center in that city. Other Shi'a cities of this region were Neyshabur, Mashhad, Bukhara, Quhistan, Raqa, etc. where 'Alawi Sayyids were esteemed.

Scholars of Mawara' al-Nahr played a significant role in spreading the Islamic culture and civilization. Muhammad b. Mas'ud al-Tamimi known as al-'Ayyashi was among them who lived in 3rd/9th century. Al-Tafsir is the only book remained from among his works. Another scholar of this region was Muhammad b. 'Umar b. 'Abd al-'Aziz known as al-Kashshi who was a famous scholar of rijal and the author of Ma'rifat al-rijal about the companions of Imams (a).

Mawara' al-Nahr region was considered among very important regions, especially because it was the gate for the invasion of different tribes to Islamic lands and Iran in particular. In this region, after the emergence of Islam, many independent and semi-dependent governments were formed, some of which had an important role in spreading the Islamic knowledge, culture and civilization, such as Samanids.

After Samanids, Turks of Mawara' al-Nahr who had great power in the region, took the power. Kara-Khanids were the first Muslim Turks who could took the power after Samanids. It was important because that provided the grounds for frequent emigration of many Turks to Mawara' al-Nahr, which developed the region and they formed the majority of the population of the society. Another Turk tribe who took the power in this region were Ghaznavids. Also, Seljuk Turks ruled over the region for years after the fall of Ghaznavids.

In 616/1218-19, Mongols invaded Islamic lands through Mawara' al-Nahr by defeating Khwarazmshahids and conquering Mawara' al-Nahr. They killed many Muslims, destroyed and plundered many cities. Although, this region was the first center in fighting with Mongols and the people of Mawara' al-Nahr made great fights agents Mongols, Mongols ruled over this region for a long time and thus, it could never again become a scientific and cultural center.

After the rule of Mongols, Timurids took the power, when Mawara' al-Nahr gained a new spirit and became the scientific and cultural center of Iran, and that period is referred to as the renaissance of Timurid era. Another government which took the power in this region and prepared the grounds for complete separation of Mawara' al-Nahr from Iran was the Shaybanid or Uzbek dynasty which was in opposition with the Safavid government.