Samarqand (Arabic: سَمَرقَند) is an ancient city in Transoxiana in today's Uzbekistan. Toward the end of the second/eighth century, Shiism spread in Samarqand and Kashsh (today's Shahrisabz), and the activities of prominent Shiite scholars formed an active scholarly center in that region by the beginning of the Occultation of the Twelfth Imam (a), which is sometimes called the school of Samarqand.”

Among the founders of the school of Samarqand in that time were some of the companions and representatives of the Imams, who were usually from Samarqand but had spent a part of their lives in the presence of the Imams (a).

Samarqand was known in the fourth century BCE as Maracanda and was the capital of Sogdian satrapy. In 329 BCE, Samarqand was conquered by Alexander the great. In that time, Samarqand was among the important cities on the Silk Road. Later, the city was ruled by Central Asian Turks (before Islam), Arab Muslims (8th century CE), Samanids (9th-10th centuries), Turk rulers (11th-13th century), and rulers of Khwarazm (early 13th century). Then, in 1220 CE, Samarqand was destroyed by Genghis Khan. However, in 1336 CE, Samarqand became the capital of the Timurid empire and the most important cultural and economical center of Central Asia. The city was later conquered by the Uzbeks in 1500 CE and became a district of Bukhara.

Now, Samarqand is the second largest city of Uzbekistan and the capital of Samarqand Province. Most of the people are Persian-speaking. The city of Samarqand has an old part and a new part constructed by the Russians in the nineteenth century. The historical part of Samarqand was added in 2001 by UNESCO to the World Heritage List.

According to geographical sources, Samarqand and Kash had a very good climate for agriculture. The distance between the two cities are said to have been "two days". It is said that Muslims were present in these two cities around 80/699, but according to al-Baladhuri, the Muslim presence dates back to a later period at the time of Umar b. Abd al-Aziz.

Samrqand and Kash are located in today's Uzbekistan. Samarqand has preserved its historical name, but Kash came to be called Shahrisabz.

There were extensive interrelations between the hadith transmitters from Samarqand and Kash. For instance, in the Rijal of al-Shaykh al-Tusi, the transmitters hailing from Samarqand, Kash, and their neighboring cities were usually students of al-Ayyashi.

Samarqand was a major Shiite centers in central Asia and the hometown of many prominent scholars. In the fourth/tenth century, Muhammad b. Mas'ud al-Ayyashi founded a Seminary in the city. Al-Ayyashi was an outstanding scholar from Samarqand whose teachers of hadith were scholars from Qom, Kufa, and Baghdad.

Toward the end of the second/eighth century, Shiism declined in Samrqand and Kash. The beginning of Shiism in Samarqand is not known, but the activities of Shiite scholars in this region led to the formation of an important scholarly center there right before the beginning of the Twelfth Imam's occultation.

Another outstanding Shiite figure in Samarqand was Husayn b. Ishkib, a companion of Imam al-Askari (a), who studied in Qom and became a prominent jurist and theologian. The seminary founded by al-Ayyashi and Ibn Ishkib was run by their students such as Haydar b. Muhammad b. Na'im.

Other companions of the Imams and transmitters of their hadiths from this region were Ja'far b. Abi Ja'far al-Samarqandi, Ja'far b. Ayyub al-Samarqadi, Muhammad b. Na'im, and Muhammad b. Ibrahim al-Warraq.

Moreover, Sayyid Imam Abu l-Qasim Ali b. Aqil (d. 526/1132) is buried in Samarqand, and his grave is a pilgrimage site for many people.

The Representatives of the Imams (a) in Samarqand

Shiite Scholars of Samarqand and Kash

The following are some of the Shiite scholars in Samarqand and Kash:

The School of Samarqand

The founders of the school of Samarqand were some of the companions and representatives of the Imams (a), who usually hailed from this region. The first figure in this school seems to have been al-Husayn b. Ishkib al-Samarqandi. He was a companion of Imam al-Hadi (a) and Imam al-Askari (a) and resided for some time in Qom. It is reported that he became an attendant at the Shrine of Lady Fatima al-Ma'suma (a) in Qom or, according to another report, at the Shrine of Imam al-Rida (a). For some unknown reasons, he came to Khorasan and resided in Samarqand. He was a prominent jurist and theologian, who had produced written works against Sunni and Zaydi theologians. The date of his demise is not known, but he probably died in the beginning of the Minor Occultation. He had some debates with a number of Indian theologians. It is reported that Abu Ghanim Hindi, a scholar from Kashmir, came to Balkh with some other Indian scholars to investigate about Islam. The governor of Balkh called the scholars of the city to debate with him, but they were all defeated. The governor then invited al-Husayn b. Ishkib from Samarqand and asked him to have a debate with Abu Ghanim. Ibn Ishkib managed to defeat Abu Ghanim with his arguments such that he embraced Islam and travelled to Baghdad and was able to meet the Twelfth Imam (a).

Al-Husayn b. Ishkib had several students in Samarqand such as Muhammad b. Warith al-Samarqandi from whom Ibn Qulawayh al-Qummi transmitted hadiths.

Another Samarqandi scholar, a contemporary of Ibn Ishkib, was Ja'far b. Muhammad b. Ayyub, who was a hadith scholar and, according to a report, met Imam al-Hadi (a).

Ja'far b. Muhammad was another Samarqandi scholar and a representative of the Imams (a), though he did not directly narrate any hadiths from them. He was a shaykh of al-Ayyashi and Abu Amr al-Kashshi.

Muhammad b. Nusayr al-Samarqandi also was a student of Ahmad b. Muhammad b. Isa al-Qummi and a teacher of al-Ayyashi and Abu Amr al-Kashshi. His brother Hamdawayh was also a scholar.

A prominent Samarqandi scholar was Muhammad b. Mas'ud al-Ayyashi. He converted from Sunnism to Shiism. His teachers were a group of hadith scholars from Baghdad, Qom, and Kufa such as Ibn Faddal, al-Tayalasi, and Husayn b. Ubayd Allah al-Qummi. He had sessions at his house in Samarqand with scholars and students for copying, reading, and editing books. It is said that he had about two-hundred books and treatises on various topics, but the only extant written work of al-Ayyashi is his commentary of the Quran. Among the students of al-Ayyashi were Zayd b. Ahmad al-Khulqi, Ibrahim al-Habbubi, Ahmad b. Saffar, Ja'far b. Muhammad b. Chachi, Ahmad b. Ya'qub Sana'i, and Ja'far b. Abi Ja'far al-Samarqandi.

Haydar b. Muhammad b. Na'im al-Samarqandi had a close relationship with his teacher al-Ayyashi. He was a transmitter of all Shiite works. He also transmitted all the works of al-Ayyashi through Abu Amr al-Kashshi.

Ja'far b. Muhammad, son of al-Ayyashi, was among the students of his father and a transmitter of his books.

The scholarly and intellectual interactions between Samarqand and Qom led to migrations of scholars between these two cities.

Al-Shaykh al-Saduq in Samarqand and Kash

Al-Shaykh al-Saduq had a journey to Samarqand and Kash, and heard and quoted hadiths from the scholars of that region such as Ubdus b. Ali b. al-Abbas al-Jurjani and Abd al-Samad b. Abd al-Shahid al-Ansari.

He also transmitted hadiths from a number of scholars who are unknown except their being from Samarqand or Kash, such as al-Muzaffar b. Ja'far b. al-Muzaffar al-Samarqandi and Muhammad b. Sa'id b. Aziz al-Samarqandi.

The Decline of the School of Samarqand

We do not have adequate information about the reasons behind the decline of this school. We just know that shortly after the presence of al-Shaykh al-Saduq (d. 381/991), this school was increasingly in decline. However, two reports in this regard are noteworthy. One is a report by Muhammad b. Ahmad al-Maqdisi about Kash, in which he speaks of a cholera pandemic. This pandemic may have caused the decline in the school of Samarqand.

Another report, which seems show the reason behind this decline more accurately, has to do with a military attack against the Samanid dynasty and the imprisonment of Abd al-Malik b. Nuh, the ruler of Transoxiana and Khorasan, which put an end to the Samanid rule and led to the martyrdom or immigration of the scholars of this region.

There were many Shiite mosques and religious-cultural centers, that were main places of the dissemination of the teachings of Ahl al-Bayt (a). The following are some of these mosques and centers: 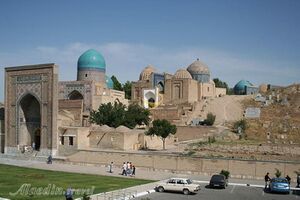 1. The shrine of Qutham b. al-Abbas (the Prophet's uncle), known as Shah-i Zinda. The people of Samarqand believe that miracles were performed through his soul or at his shrine. The shrine of Shah-i Zinda is one of the historical sites of Uzbekistan, with the Khorasani architecture style. The shrine was reconstructed at the time of Tamerlane and is the burial place of some of his family members.

2. The Mosque of Ahl al-Bayt (a). This mosque, inaugurated in 1378 Sh, is located in the Punjab district of Samarqand. It is the largest Shiite mosque of Uzbekistan with a capacity of about 20,000 worshippers.

3. Murad Awlia Mosque. In this mosque a descendant of Imam al-Kazim (a) was allegedly buried and thus it has become a pilgrimage site for the Shiites. On the gravestone, in addition to Quranic verses, the name "Sayyid Musa b. Aqa Sayyid Murtada" is inscribed with the year 927/1521 as the year of his demise. People of Samarqand believe in miracles happening through Sayyid Musa. The existing stones and pillars around this grave indicate that it was once a splendid burial place.

4. The Bibi-Khanym Mosque. This mosque is located in the east of Rigestan Square. It has a splendid portal arch of entrance, on which Timur had his genealogy up to Genghis Khan inscribed on it. This mosque was built by Timur's command and after his victorious return from India between the years 802-807/1400-1405. It seems that the mosque was built on the model of a mosque in India that had impressed Timur. To construct the mosque, Timur invited architects from India, Azerbijan, and Fars. It is said that on a daily basis 200 people worked on the building of the mosque, 500 people cut stones from mountains and carried them to the mosque’s site, and 95 elephants carried other materials needed for the construction.

5. The Mosque of Sahib al-Zaman. This mosque, located in the Shiite district of Samarqand called Khwaja Sa'at, was built with people’s donations.

Current Situation of Shiites in Samarqand

The Shiites of Samarqand form a well-known minority in Uzbekistan. Most of them are descendants of Iranian Azeris, who served as the troops of Nader Shah and came to that region in the 18th century. They preserved their Shiite identity better than the Shiites of the other parts of central Asia. Most of the Shiites in Samarqand reside in the Punjab or Iranian district.