Abu l-Qāsim Ḥasan Manṣūr, known as Abu l-Qāsim Ferdowsi (Persian: ابوالقاسم فردوسی), (b. 329/941 — d. 411/1020) was an Iranian poet and epicist of the fourth/tenth century. He was born in Paj, a village in Khorasan. One of his famous works is Shahnameh (Book of Kings), in which the lives of the kings of Iran are narrated in poems. Historians have reported that he spent all his wealth in this way, but his effort was not accepted by Mahmud of Ghazni. Some sources considered this denial originating from the religious opposition between Ferdowsi and Mahmud of Ghazni. Sayyid Hasan Amin has considered Ferdowsi's approach in composing Shahnameh, adopted from the Qur'an's method. About Ferdowsi's religion, different views have been mentioned. 'Abd al-Jalil Qazwini was the first person who introduced Ferdowsi as a Shi'a in his book al-Naqd.

Abu l-Qasim Hasan Mansur known as Abu l-Qasim Ferdowsi was an Iranian poet and epicist in the fourth/tenth century. The date of his birth has been considered 329/941 or 330/942.[1]

Ferdowsi was the child born after the second marriage of Abu Mansur Sharaf Shah. History reports that one day, Sharaf shah dreamed that from his house, a son went to sky. They interpreted his dream as he would have a son whose name would remain in the history.[2]

Ferdowsi was a son of a peasant born in Paj, a village of Tus. He also had journeys to Baghdad and Mazandaran.[3] According to Nizami 'Aruzi, Ferdowsi was rich, but gradually spent his wealth and time for composing Shahnameh and toward the end of his life, he became poor and finally passed away in 411/1020 at the age of 80 in his birth town.[4]

Sayyid Hasan Amin wrote that at the time of Ferdowsi, some areas of Khorasan, especially Tus, Beyhaq, Paj and Tabiran, were Shi'a and thus, he did not consider it impossible for Ferdowsi to have inclinations toward Shi'a community at that time, and even he pointed about Fedowsi's titles such as Rafidi, attributed to him.[5] Amin mentioned the Shi'a region and atmosphere of Ferdowsi's living place, that people in that region supported Shi'a uprisings and other similar issues as evidences to suggest that he was Shi'a.[6]

'Abd al-Jalil al-Qazwini was the first person who mentioned in al-Naqd that Ferdowsi was Imami Shi'a. Later, Qadi Nur Allah al-Shushtari too, introduced him as Shi'a.[7] However, some people such as Ibrahim Purdavud and his student, Muhammad Mo'in considered him Zoroastrian and Malik al-Shuʿara Bahar too, considered him the reviver of Zoroastrianism.[8]

According to historical sources, Ferdowsi's burial in Muslims' cemetery was opposed by a person known as Abu l-Qasim Gorgani who believed that Ferdowsi praised disbelievers and Zoroastrians in his poems.[9]

Mahdavi Damghani believed that it is impossible to find about a poet's religion by the number of his poems, except that he mentions a clear statement in them.[10] He continued and said that Ferdowsi was Shi'a and there is no doubt about his religion.[11] 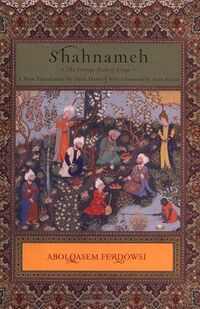 One of the notable works of Ferdowsi is Shahnameh. Sayyid Hasan Amin claimed that the style of Shahnameh in composing poems is adopted from the Qur'an, while the eloquence of the Qur'an is higher.[12] In Shahnameh, Ferdowsi has frequently spoken about culture and sought to link between the culture of Iran before and after Islam.[13]

Some people did not consider composition of Iranian national epics an invention by Ferdowsi and considered others such as Mas'udi Marvzi and Daqiqi Tusi prior to him, in that.[14] It is reported that when Ferdowsi was 40 years old, it was several years since Daqiqi, an Iranian poet had begun narrating the Iranian national history in poems, but he was killed by his servant before he could finish it.[15]

Ferdowsi decided to finish Daqiqi's work and turned the history Abu Mansur, the governor of Tus had written and included the history of kings of ancient Iran and the destiny of Iranian nation into poem. Therefore, the history of Abu Mansur known as Shahnameh Mansuri became the most important source for composing Shahnameh by Ferdowsi. He began it in 370/980-81 and finished it in 400/1009-1010.[16]

In Shahnameh, Ferdowsi has poems about the Ahl al-Bayt (a), especially Imam Ali (a), including,

"The head among the Companions, was Ali (a)
That the Prophet (s) called him, Ali the master"

Ferdowsi is mentioned among Persian poets who was inspired by the words of Imam Ali (a).[17] After Ferdowsi, one of the persons who was influenced by Ferdowsi was Ibn Hisam Khusfi, the author of Khavaran Nameh, which he composed under the influence of Shahnameh.[18]

Mahmud of Ghazni's Reaction toward Shahnameh 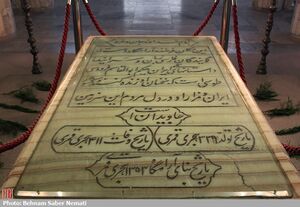 A Photo of Ferdowsi's gravestone

Toward the end of his life, when Ferdowsi lost his supports for continuing Shahnameh, as reported in the history, he decided to dedicate it to Mahmud of Ghazni;[19] but, due to different reasons, it was not accepted by him including:

Some believe that Shahnameh including 60 thousand couplets was composed during the time of Mahmud of Ghazni and was dedicated to him;[22] and considered him the one who motivated Ferdowsi for composing it.[23] However, others consider racial attributes of Mahmud of Ghazni and historical reports about him in disagreement with that view.[24]

Some researchers considered that Ferdowsi was born in 934 CE and held a commemoration congress titled as "Ferdowsi Millennium" in 1934 CE. This congress was held in Dar al-Funun in Tehran, where a group of Iranologists and researchers from other countries attended. The reconstructed tomb of Ferdowsi was opened after this congress by the presence of Reza Shah and the participants in the congress.[25]

New designing and reconstruction of Ferdowsi's tomb in Tus was made by Hossein Lorzadeh and the poems of the tomb were written in calligraphy by 'Imad al-Kuttab.

Different works in painting, miniature and other works including the movie titled as "Fedowsi" produced by 'Abdolhossein Sepenta, a play called Dibacha-yi Novin-e Shahnameh written by Bahram Beyzai were all inspired by the poems of Ferdowsi.[26]