Sayyid Rūhollāh Mūsawī Khomeinī (Persian: سید روح الله موسوی خمینی), (b. 1320/1902 - d. 1409/1989), best known as Imām Khomeinī (Persian: امام خمینی), was one the most important Shi'a marja's of the 14th//20th century. He was the leader of the Islamic Revolution in Iran, that was victorious in 1979 and overthrew the monarchy and established an Islamic republic in Iran.

He was arrested twice by the monarchical Pahlavi government and was exiled for life. For a while, he lived in Turkey, then he moved to Najaf. He stayed in Najaf for 13 years teaching, writing and leading the revolutionists in Iran. In 1979, he was forced to leave Iraq; so he went to Paris. After a while, he returned to Iran and led the Islamic Revolution to victory. He was the leader of the Islamic Republic of Iran until his passing in 1989.

Imam Khomeini's movement and the victory of the Islamic Revolution's impact was felt all over the world and led to establishment of political movements based on Islamic thoughts. The doctrine of al-wilayat al-mutlaqa li l-faqih (absolute guardianship of the jurist), a political doctrine based on Shi'a beliefs, is his most important doctrine. He tried to establish the Islamic Republic of Iran and its constitution based on this doctrine.

Muslims, especially Shi'as, held him in high regards. His funeral, with participation of almost 10 million people, was the most crowded funeral in the world up to now.

Imam Khomeini, also taught Islamic ethics during his residence in Qom in the school of Faydiyya.

During his life, he lived a plain and ascetic life. In the last 10 years of his life, when he was the supreme leader of the Islamic Republic of Iran, he lived in a humble house located in Jamaran (a district of Tehran.)

His father, Sayyid Mustafa Musavi, who had studied Islamic subjects in Najaf, was contemporaneous with Ayatollah Mirza Shirazi. His father, whom the people of Khomein referred to for their religious issues, was murdered five months after Sayyid Ruhollah's birth in a fight against the brutal local governor.

Sayyid Ruhollah grew under the supervision of his mother, Hajara Agha, and his paternal aunt Sahiba Khanum, until he was 15.[2]

He married Khadija (famously known as Quds Iran) Thaqafi in 1348/1929.[3] He had two sons -Mustafa and Ahmad- and three daughters, Zahra, Farida and Siddiqa. On the eve of Shawwal 28, 1409/June 3, 1989[4] (khordad 13, 1368 sh) he passed away in Shahid Raja'i Heart Hospital in Tehran. His funeral was held on Dhu l-Qa'da 1, 1409/June 5, 1989 in the Grand Musalla of Tehran. Ayatollah Sayyid Muhammad Rida Gulpaygani performed the funeral prayer on his body. He was buried in Bihisht Zahra[5] (a cemetery in outskirts of Tehran) on Dhu l-Qa'da 2/June 6 in presence of 10 million people who came form various cities of Iran for mourning. His funeral is counted as the most attended funeral in history.[6]

Study in Arak and Qom

In 1338/1919-20, he went to Islamic Seminary of Arak. Shortly after his teacher, Shaykh Abd al-Karim Ha'iri Yazdi, migrated to Qom, he also moved to Qom along with a number of his classmates.[8]

In the Islamic Seminary of Qom, in addition to completing the preliminary and advanced levels in jurisprudence and principles of jurisprudence (Kharij fiqh and usul), he worked on other fields of Islamic study, including prosody, mathematics, astronomy, and Islamic philosophy. He studied advanced levels of theoretical and practical mysticism (al-Irfan al-nazari wa l-amali) under Ayatollah Muhammad Ali Shahabadi for six years.[9] He also had a relationship with Ayatollah Mirza Javad Maliki Tabrizi and spoke well of him.

In Najaf, he taught Islamic subjects including advanced levels of jurisprudence for almost 13 years in Masjid al-Shaykh al-A'zam al-Ansari. It was during these years that he taught the theoretical basis of his doctrine, wilayat al-faqih, in several sessions for the first time.

According to his students, his class was one of the most important classes in the Seminary of Najaf. In some periods, the number of participants in his class reached 1200, among whom were tens of well-known contemporaneous mujtahids.[13] 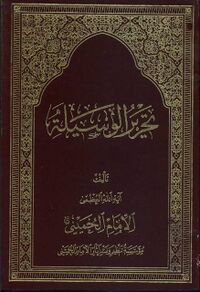 Leading the Opposition against Monarchy

The governing system of Iran was a constitutional monarchy, which was changed to absolute monarchy by constant contravention of constitution by the two Pahlavi Shahs (kings). Moreover, actions and decisions of the ruling monarch often contradicted Islamic laws and beliefs, which caused religious people, especially the clergy, to protest to governing regime.

In 1962, by releasing a statement, Imam Khomeini formally and openly expressed his protest against the monarchy. In Jumada I 9, 1382 (October 8, 1962), after that the National Consultative Council (Majlis Shura Milli) passed the bill of Regional and Provincial Councils, Imam Khomeini and other mujtahids in Qom held a session, after which they released statements against the bill. Finally, after his constant protest, the law was repealed in Rajab 5, 1382 (December 2, 1962).[15]

Leadership of the Islamic Republic of Iran

Eventually, the revolutionary movement of people succeeded in 1399/1979. Imam Khomeini returned to Iran on Rabi' I 3 (February 1) of the same year and on 13th/11th the monarchy was overthrown. After some months, in Jumada II, 1399 (April 1979) the Islamic Republic system won the referendum as the governing system of the country. After a while, the draft of the constitution was written and put to referendum. According to the constitution, Imam Khomeini was the leader of the Islamic Republic of Iran. He held this position to the end of his life (Shawwal, 1409/June, 1989).

Consolidation of the Islamic Republic, giving guidance on writing the constitution, dealing with interior conflicts, commanding the war against Iraq's invasion, accepting the peace treaty with Iraq and revision of the constitution are some of his most important actions during these 10 years.

Some months after the victory of the revolution, in the month of Ramadan, 1399 (August 1979), Imam Khomeini declared the last Friday of the holy month of Ramadan as the Quds Day and asked the Muslim world to show their solidarity with the oppressed people of Palestine and to defend their rights.

Since then, mass marches and rallies are held in Iran and other countries on this day to show support and solidarity with Palestinians.[19]

This day is titled as the International Quds Day.

On the first day of the year 1989 (Jumada I 23, 1409), Imam sent a letter to the leader of former Soviet Union, Mikhail Gorbachev. A delegation from Iran, led by Ayatollah Jawadi Amuli, including Dr. Muhammad Jawad Larijani and Mrs. Mardiyya Hadidichi (Dabbagh) delivered the letter to Gorbachev.

The letter was written in a time when political analysts had predicted reformist movements and changes in the communist world. Imam Khomeini has foretold the dissolution of the Soviet Union and had predicted that communism would soon be seen in museums of political history. Moreover, in the letter, after criticizing the Materialist ideology, Imam had called the leaders of the Soviet Union to spirituality and invited them to conduct serious research about the dynamic teachings of Islam and suggested them to send some scholars to Qom for deeper research about Islam.

In the first Hajj season after the victory of the Revolution (Dhu l-Hijja, 1399/ November, 1979), Imam Khomeini gave a message to all of Hajj pilgrims. In this historical message, Imam focused on the social and political aspect of Hajj, which has been neglected for a long time and by mentioning the first verse of Sura al-Tawba, concluded that repudiation of enemies of Islam especially U.S. and Israel is one of the most significant part of a true Hajj, as God and His Apostle (s) have repudiated polytheist, who were enemies of Islam at that time.

According to this message, every year Iranian pilgrims hold a session as "Repudiation of Polytheists" ("bara'at min al-mushrikin" the titled is derived from the first verse of Surat al-Tawba) on the 9th of Dhu l-Hijja in the land of 'Arafat.

After publication of the book The Satanic Verses in 1408/1988, which included insults to the Holy Prophet (s), Imam Khomeini issued a fatwa that the author of the book (Salman Rushdie) is an apostate due to his insults to the Prophet (s) and must be executed.[20] After a while a rumor spread that if he repents, the fatwa of his execution will be withdrawn (repealed), but Imam Khomeini emphasized, answering a question on the subject, that even if the author repents and becomes the most pious person of the time, the fatwa will not change.[21]

Imam Khomeini presented his theory of al-wilayat al-faqih (guardianship of the jurist) through his classes -which was later distributed under the title "Islamic Governing" in Najaf for the first time.[24] The key element of this theory is that according to Shi'a thoughts, the country must be governed under the supervision of a Mujtahid who is qualified as a marja'. After the victory of the Islamic Revolution in Iran, this theory was put in the Constitution as one of its principles, and actually, the Islamic Republic has been established based on it.

Later, in the last years of his life, Imam Khomeini presented the theory again and said that a Faqih (jurist) has the same authority of the Prophet (s) and Imams (a) in governing. According to this theory a faqih can suspend a primary Islamic law for other more important issues in Islam.[25]

The Role of Time and Place in Ijtihad

On Rajab 16, 1409 (February 22, 1989), Imam issued a message to Islamic Seminaries and the clergy which became known as "Manshur Ruhaniyyat" (charter of the clergy) in which he stated that the common ijtihad (deduction of the Islamic laws from its sources) in seminaries are not sufficient enough for management of the society.[26] He emphasized that time and place play an important role in ijtihad, as they change the Mujthid's view of a subject and consequently the ruling regarding that subject.[27] He had mentioned this point in his formerly issued message which is known as "Manshur Baradari" (charter of brotherhood.)[28]

Playing chess was considered a Haram (forbidden) act in the opinion of most of Shi'a jurist. Answering a question about chess on Muharram 28, 1409 (September 10, 1988), Imam Khomeini permitted playing chess, if it is no longer described as a tool for gambling and if the players do not gamble.[29] This fatwa which was considered somehow new, brought some reactions. One of his students wrote a letter of criticism to him. In response, Imam Khomeini emphasized on his fatwa and also criticized the common approach of mujtahids to jurisprudential sources.[30] A week after Imam's demise, one of his poems was spread for the first time. The poem, which has mystical connotation, became very well-known among the people. After a while, the full collection of his poems were published.

The collection consists of six chapters (according to the types of poems) and was published for the first time by the "Institute of Compilation and Publication of Imam Khomeini's Works" under the title "Diwan-i Imam" in 438 pages.

The book has been translated into various languages including: English, Hindi, and Arabic. It has been translated to English by Ghulam-Rida A'wani and Muhammad Legenhausen entitled The Wine of Love[31]. Qadir Fadili, has written a Persian commentary and provided a subject index for the book.