The Satanic Verses is an insulting novel against the Prophet of Islam (s) and the Qur'an written by Salman Rushdie, a British Indian author. The title of the novel is taken from the Myth of Gharaniq, which is considered by Muslims as a completely fabricated story. Based on the mentioned narration, the Prophet (s) while reciting verses 19 and 20 of [[Qur'an 53], expressed themes that were temptations by Satan.

In The Satanic Verses, Rushdie mentions the Prophet Muhammad (s) with an insulting title, considers the Glorious Quran to be a mixture of stories, legends and satanic ideas, names some of the Prophet's companions with offensive terms, and accuses the wives of the Prophet (s) of moral deviance.

The publication of the novel in September 1988, provoked many protests from Muslims, Christians and Jews. While holding rallies against Rushdie and his book, Muslims in India, Pakistan, Italy, Canada and Egypt, set fire to some bookstores distributing the book. The official Vatican newspaper, also, condemned Salman Rushdie and his novel.

Imam Khomeini, the leader of the Islamic Revolution in Iran, on February 14, 1989, sentenced the author of the book to death and declared anyone who is killed on the way to the execution of Salman Rushdie a martyr. In another announcement, Salman Rushdie's repentance was considered unacceptable. After Imam Khomeini's sentence, Salman Rushdie was forced to live in hiding, and his apology for upsetting the Muslim people did not free him from the consequences of the death sentence.

Salman Rushdie was born in 1947 in Mumbai (Bombay), India. He finished his primary education in a school run by English-speaking Christian missionaries, and after his family’s migration to England, he began to study in King’s College, Cambridge. In 1968, Rushdie went to Pakistan, where he began to work at TV, but after one year, he returned to England, and obtained British citizenship.

Born into a Muslim family, Salman Rushdie had written three novels before The Satanic Verses: Midnight’s Children, Shame, and Grimus.

Salman Rushdie’s The Satanic Verses was first published in English on September 26, 1988 by Penguin Books in the UK in 547 pages. So far, it has been 140 times in different parts of the world in languages such as Arabic, Spanish, German, Chinese, Russian, and Persian. In the same year, The Satanic Verses won the Costa Book Awards. It was also one of the five finalists of the credible Booker Prize in 1988, but it failed to win the prize.

According to Spiegel, before the publication of the book, Salman Rushdie received 1.5 million marks as an advance from his publisher, which was unprecedented until that time.

The book’s title The Satanic Verses is a reference to The Myth of Gharaniq. According to that narrative, when the Prophet (s) was reciting verses 19 and 20 of Quran 53, he recited verses about the intercession of idols. At night, Gabriel appeared to him, warning that those verses were satanic temptations. Many Shiite and Sunni scholars believe that the story of gharaniq is a fabricated myth.

The publication of the novel, The Satanic Verses, incited many reactions, from protests by Muslims around the world, bans on the publication of the book, threats against or murder of the book’s translators, Salman Rushdie being condemned by New York’s archbishop, by the official newspaper at Vatican, and high-ranking rabbis. Other reactions include the issuance of a death sentence by Imam Khomeini, a prize for execution of Rushdie by the 15 Khordad Foundation, and publication of critiques against the novel The Satanic Verses. 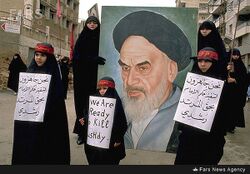 The image of Lebanese Muslims marching against Salman Rushdie after Imam Khomeini's fatwa.

Muslim around the world, including India, Pakistan, Kashmir, Thailand, West Germany, Italy, Canada, Sudan, and Egypt held protests against Salman Rushdie, and set fire to some bookstores in which The Satanic Verses was sold. On October 5, 1988, the publication of the novel was banned in India, as the Indian government announced that the book was dangerous because of its antireligious content.

The publication of translations of The Satanic Verses around the book incited Muslim reactions. For instance, Barmak Behdad, the Kurdish translator of the book, claimed that he received death threats, and the journal of Khalq, published in Sulaymaniyah in the Kurdistan region of Iraq, refused to publish the rest of the Kurdish translation after it had published its first section. Aziz Nesin (the Turkish translator of the novel), Hitoshi Igarashi (the Japanese translator), and Davoud Nemati (the Persian publisher of the book in Germany) were threatened or killed.

Condemnation by Christians and Jews

Cardinal O’Conner, Archbishop of New York and a prominent Catholic figure in the US, condemned the book The Satanic Verses. The official newspaper of the government of Vatican condemned Salman Rushdie and his novel. Lord Hartley Shawcross, a British lawyer, accused Salman Rushdie of misusing the right to freedom. Avraham Shabira, an Ashkenazi rabbi in Israel, condemned The Satanic Verses from both religious and non-religious perspectives, asking for its ban in his country.

Moreover, Immanuel Jacobwitz, the rabbi of Hebrew groups, asked for the approval of laws banning any insults on beliefs. Moreover, The Satanic Verses was condemned by the United States Conference of Catholic Bishops, American Baptist Churches of the South, the United Methodist Church of America, the Senatorial Presbyterian Church of America, and Jerry Falwell, the leader of the Moral Majority movement in the US.

"We are from Allah and to Allah we shall return.

I am informing all brave Muslims of the world that the author of The Satanic Verses, a text written, edited, and published against Islam, the Prophet of Islam (s), and the Qur'an, along with all the editors and publishers aware of its contents, are condemned to death. I call on all valiant Muslims wherever they may be in the world to kill them without delay, so that no one will dare insult the sacred beliefs of Muslims henceforth. And whoever is killed in this cause will be a martyr, Allah willing. Meanwhile, if someone has access to the author of the book but is incapable of carrying out the execution, he should inform the people so that [Rushdie] is punished for his actions.

On February 14, 1989, Imam Khomeini made decree in which he sentenced the author of The Satanic Verses and the publishers aware of its content to death, asking Muslims around the world to execute them wherever they found them so that no one could dare insult what is sacred for Muslims. According to this decree, a person who is killed on this path counts as a martyr.

After Imam Khomeini's ruling, some international media talked about the possibility of the revocation of Salman Rushdie’s death sentence in case he expressed repentance, but then another announcement was published by Imam Khomeini's office on February 18, 1989 to the effect that even if Salman Rushdie truly repents and becomes the most pious person of the time, it is still incumbent upon every Muslim to try his best with his life and property to send him to the hell. Another part of the announcement reads that if a non-Muslim learns about the hiding place of Salman Rushdie and executes him, then Muslims are obliged to give him a prize or reward.

After Imam Khomeini issued the death sentence, Salman Rushdie had to live in a hiding place, and as he writes in his memories, his personal relations with his wife and children were affected by the death sentence, and even his apology did not alleviate the feelings of Muslims.

On August 5, 1989, Mustafa Mahmoud Mazeh, a 21 year-old Lebanese, attempted to kill Salman Rushdie in compliance with Imam Khomeini's decree, but before arriving at Salman Rushdie's residence, he was killed with the explosion of the explosives he had with him.

After Imam Khomeini's death sentence against Salman Rushdie, the Khordad 15 Foundation set a two-million dollar prize for any person who would execute the death sentence of the author of The Satanic Verses.

While responding to a humiliating movie against the Prophet (s), Hassan Sane'i, the representative of the guardian jurist and the head of the Khordad 15 Foundation, increased the prize of Salman Rushdie's execution to three million and three thousand dollars. In his view, the execution of the death sentence could put an end to insults against Islam and the Prophet (s) in the form of cartoons, articles, and movies.

When Imam Khomeini's death sentence against Salman Rushdie was issued, the British government summoned its diplomats from Iran as a protest against the death decree on its citizen, and then twelve members of the European Economic Community, including Spain, France, and Italy, summoned their ambassadors from Tehran. Moreover, in Esfand 1367/March 1989, the Iranian Parliament (Majlis) approved the proposal to cut all diplomatic ties with the UK.

However, the ties resumed on September 27, 1990 after the British Prime Minister and Foreign Minister expressed the necessity of respect for Islam.

The book Naqd tawti'a ayat shaytani (A critique of the conspiracy of satanic verses) by Ata'ollah Mohajerani is the lengthiest and best-selling critique of The Satanic Verses. The book was published in 1989 by Ettelaat Institute, and until 2007, it was reprinted 25 times. In 1992, the book was translated into English. According to Mohajerani, Salman Rushdie has called the authenticity of the Qur'an into question by endorsing the myth of Gharaniq, just like four well-known orientalists before him: Theodor Nöldeke, William Muir, Montgomery Watt, and Ignác Goldziher. Nasrollah Pourjavady, a professor of philosophy in Iran, said in spring 1989 that the novel The Satanic Verses is boring and disgusting, and it involves ridicules of angels, insults against prophets, particularly the Prophet of Islam (s), his companions, and his wives. Pointing to parts of The Satanic Verses, Pourjavady believes that the book involves insults against the Islamic Revolution of Iran as well.

In autumn 1989, Mustafa Husayni Tabatabaʾi wrote a forty-page booklet under "The humility of Salman Rushdie," in which he believes that Salman Rushdie's work was a political conspiracy, lacking any scholarship. Husayni Tabataba'i asserts that The Satanic Verses is in continuity with the old enmity against Islam, after the Crusades, during which Christians fabricated false heinous myths against the Prophet to distort the face of Islam and the culture of Muslims.