Al-Sayyid ʿAbd al-Hādī al-Shīrāzī (Arabic: السید عبدالهادی الشیرازی) (b. 1305/1887-8 - d. 1382/1962) was a scholar in fiqh and usul al-fiqh and the Shi'a Marja' of 14th/20th century. After the demise of Sayyid Abu l-Hasan Isfahani, Sayyid 'Abd al-Hadi Shirazi became an authority. During the time of 'Abd al-Karim Qasim, the ruler of Iraq, al-Shirazi issued an anti-communist fatwa against advertisements of Ba'th regime.

Al-Sayyid 'Abd al-Hadi al-Shirazi, son of Sayyid Isma'il Shirazi was born in 1305/1887-8 in Samarra. At the same year, his father passed away. Mirza Muhammad Hasan al-Shirazi who was the cousin of Sayyid 'Abd al-Hadi's father accepted his guardianship. He went to Najaf and lived there for a while and participated in the class of Akhund Khurasani and Shaykh al-Shari'a Isfahani. After many years of staying in Najaf, he returned to Samarra and only participated in the class of Sayyid 'Ali Aqa, son of Mirza Muhammad Hasan al-Shirazi. When his other teacher, Muhammad Taqi Shirazi, the leader of Iraq's revolution emigrated to Karbala because of the anti-British revolution of Iraq and Sayyid 'Abd al-Hadi also accompanied him. Later he went to Najaf and participated in the class of Shaykh al-Shari'a until he passed away. Then, he himself began teaching religious students of the seminary of Najaf.

Al-Sayyid 'Abd al-Hadi al-Shirazi began his primary education in Samarra under some knowledgeable scholars there. He completed his education in fiqh and usul al-fiqh under Mirza 'Ali Aqa (son of Mirza Shirazi) and Mirza Muhammad Taqi Shirazi. In 1326/1908, he went to Najaf and participated in the class of Akhund Khurasani and Shaykh al-Shari'a Isfahani. He learned philosophy and wisdom in the class of the godly philosopher Muhammad Baqir Istahbanati Shirazi and ethics from Shaykh Rida Tabrizi.

Al-Sayyid 'Abd al-Hadi led the congregational prayer in the mosque of al-Shaykh al-Ansari in Najaf. After the demise of grand Marja', Sayyid Abu l-Hasan Isfahani in 1365/1946 and his successor Sayyid Husayn Tabataba'i Qummi in 1366/1947 he became Marja'. Some scholars of Najaf regarded Sayyid 'Abd al-Hadi Shirazi more appropriate for that position and asked him to accept this important religious responsibility. He accepted it reluctantly and his treatise of rulings was published. 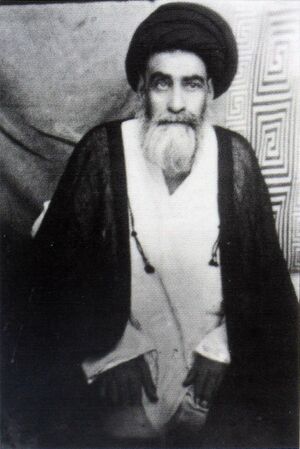 He was among the Marja's who opposed the tyrant government of the communist party in Iraq. In 1379/1959-60, al-Sayyid Muhsin al-Hakim and al-Sayyid 'Abd al-Hadi al-Shirazi introduced the communist party apostate in their ruling. Al-Sayyid 'Abd al-Hadi al-Shirazi's fatwa was issued on Shawwal 8, 1379/April 5, 1960 and its text was as following: "Communism is diversion and irreligion and it is not permitted that anyone be attributed with it."

He was blinded due to a disease in 1369/1949-50. After the treatments in Iraq were not helpful, he was brought to Tehran. He continued his treatments in Firuzabadi hospital for a while, but they were not successful and he did not regained his sight. He then visited Holy Shrines of Imam al-Rida (a) and Lady Ma'suma (a) and the scholars of the seminaries of Qom and Mashhad including Ayatollah Burujirdi. He then returned to Najaf and continued his teachings, discussions and leadership of congregational prayer and even answered religious questions, in this way that, they read questions to him and he answered them. He went to Iran for the treatment of his eyes for a second time and returned to Najaf after it was unsuccessful. He continued his religious responsibility and serving Islam as much as he could. In 1380/1960-1, Ayatollah Burujirdi passed away and many of his followers followed Ayatollah al-Shirazi and this way, his authority was expanded.