Sayyid Ḥusayn Tabātabāʾī Qumī (Persian: سید حسین طباطبایی قمی) known as Ḥāj Aqā Ḥusayn Qumī (Persian: حاج آقا حسین قمی) (b. 1282/1865 - d. 1366/1946) was a Shi'a scholar in jurisprudence and a marja'. He was the Shia's general marja' for three months after Ayatollah Sayyid Abu l-Hasan Isfahani passed away. He objected to the actions of Reza Shah and was exiled to Iraq from Iran. His arrest by Reza Shah led to gathering of people and the Event of Goharshad Mosque. His son, Sayyid Hasan Qumi passed away in 2007 in Mashhad. His other son, Sayyid Taqi Qumi is a scholar living in Qom.

Sayyid Husayn was born on Rajab 28th, 1282/December 17, 1865 in Qom. He began his primary education in a Maktab Khana in Qom. He then passed primary lessons of religious sciences including Arabic morphology, grammar and logics and then went to Tehran to complete his education. He studied Ma'alim al-madrasatayn, Qawanin, Sharh al-lum'a, Rasa'il and Makasib under teachers of that seminary and at the age of twenty two, went to Mecca and Medina to perform hajj. On his return, he entered Najaf and participated in the class of Ayatollah Mirza Muhammad Hasan Shirazi and after two years, he returned to Tehran in 1306/1889. He continued his education in Tehran for five years and once again went to Samarra in Iraq in 1321/1903-1904 and attended the class of Ayatollah Mirza Muhammad Taqi Shirazi. He stayed in Samarra for four years. His teacher especially loved him and referred his followers to him in issues which required precaution.

Following the request of the people of Mashhad to send a scholar for them, Mirza Muhammad Taqi Shirazi recommended him and Mirza Husayn move to Mashhad. Haj Aqa Husayn had permission for ijtihad from all his teachers in Najaf and Samarra and had received the permission for narrating hadiths from Sayyid Murtada Kashmiri. 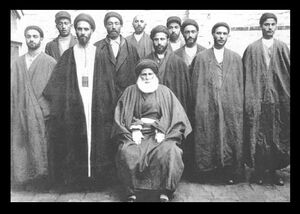 Sayyid Husayn Tabataba'i among his students.

After entering to Mashhad, Haj Aqa Husayn Qumi held the congregational prayer and established his connection with people and by answering their questions and following up the situation of the needy and deprived people, accepted the leadership of the seminary. In addition to following up the affairs of the students of religious studies, he taught jurisprudence and principles of jurisprudence in his house. Qumi avoided sending out a guide to rulings and accepting the authority, but after many religious people insisted and referred to him, his guide to rulings was published in 1351/1932-33 and his authority began from that date.

Haj Aqa Husayn always took a strong position against anti-religious actions of Reza Shah. Finally, after the Event of Goharshad Mosque, Pahlavi regime arrested him for a while and then exiled him to Iraq in 1354/1935. Therefore, his authority transferred to Karbala from then. With the presence of Haj Aqa Husayn Qumi, the general situation in the seminary of Karbala changed and the classes and sessions greatly improved. Beside management of the seminary, religious leadership of people and performing the affairs related with his authority, he also taught and educated students and taught advanced levels of fiqh and Usul. After Ayatollah Sayyid Abu l-Haasan Isfahani passed away, Qumi left Karbala after eleven years and moved to Najaf and shcolars in Najaf left the authority to him.

The time of Reza Shah and his actions stirred the objection of religious scholars and Haj Aqa Husayn Qumi began to oppose Reza Shah's regime. In one of the sessions religious scholars in Mashhad gathered in his house, he became so sad for the situation in the country and cried and said, "Today, Islam needs sacrifices and it is upon people to rise."

Finally, religious scholars decided that Ayatollah Qumi goes to Tehran in opposition to anti-religious actions of Reza Shah and speaks with him. In the last session of his class, he said that if preventing anti-religious actions leads to the killing of ten thousand people, and top of whom would be Haj Aqa Husayn Qumi, it would be worth it.

Before moving to Tehran, a group of the people of Mashhad asked him what would he ask in his meeting with Shah and he answered, "I will first ask him to give up anti-Islamic programs and if he does not accept, I will suffocate him!"

After entering Tehran, Ayatollah Qumi went to Rey and resided in Siraj al-Mulk garden. People of Tehran went to meet him in great numbers and Pahlavi regime besieged his residence. The news of his arrest led to a great demonstration of people, especially the people of Mashhad. People gathered in the Holy Shrine of Imam al-Rida (a) and Goharshad Mosque and listened to speakers. Every day, the size of demonstrations increased until the agents of the government attacked the gathering of religious scholars and people who had sit in Goharshad mosque on Rabi' II 14th, and killed some of them.

After killing and suppressing people in Goharshad Mosque, Pahlavi regime exiled him from Iran to Iraq.

During his presence in the Seminary of Karbala during the occupation of Iraq in the World War II, he issued the fatwa to make jihad against the Allied forces together with some other religious scholars of Iraq and sought the encounter with the occupants. After Reza Shah was deposed, Haj Aqa Husayn's eight years of exile ended and he returned to Mashhad in 1943. He asked the government to accept cancellation of the rule on removing hijab, cancellation of coed schools, holding up congregational prayers, teaching of the Holy Qur'an and religious teachings in schools, freedom of seminaries, decreasing economic pressure on weak people of the society, making efforts for repairing the graves of Imams of al-Baqi' Cemetery. He threatened that if the government would not accept it, he would announce an armed fight against it. His threat and people's support led to the acceptance of his requests.

Haj Aqa Husayn Qumi passed away in Najaf on Rabi' I 14th, 1366/February 5, 1947, some months after Ayatollah Sayyid Abu l-Hasan Isfahani passed away and was buried in Holy Shrine of Imam 'Ali (a).