Taṭbīr (Arabic: التطبير) or Qama Zanī (Farsi: قمه‌زنی) is a mourning practice by some Shi'as, in which they beat their heads with a dagger (qama) so that it bleeds. The practice became common from about the tenth/sixteenth century, and is practiced today in some countries, including Iraq, Lebanon, India, and sometimes Iran.

Proponents of tatbir see it as a ritual of Ashura, and a means to reinforce Shiism. Its opponents believe that it is a superstition undermining and defaming Shiism.

Shiite scholars disagree over the permissibility, recommendation, or forbiddance of tatbir. Some jurists such as Muhammad Husayn Na'ini permitted tatbir, and some of them, such as Sayyid Abu l-Hasan al-Isfahani, forbade it. Sayyid Muhsin al-Amin published work in critique of tatbir for the first time. And in 1373sh/1994-5, Sayyid 'Ali Khamenei, the Supreme Leader of the Islamic Republic of Iran, gave a speech against tatbir. Some scholars consider tatbir as undermining Shiism, and thus, illegitimate.

Tatbir is a kind of mourning for Imam al-Husayn (a) in which one beats one's head with a dagger, whereby blood runs from the head. Tatbir is usually practiced in mourning processions while they cross a street, and during tatbir, mourners loudly shout "Haydar Haydar." Moreover, drums and horns are played, and red banners are raised.

Proponents of tatbir believe that the proper time for the practice is the dawn of the Day of Ashura. In the past, the tradition was practiced on Ramadan 21 as well. The most common manners of tatbir include putting on a white long gown (similar to a shroud) and shaving the head.

Different views have been suggested as to the origin of tatbir. Some people consider it as a symbol for Lady Zaynab's (a) reaction when she saw Imam al-Husayn's head on top of a spear on the way of the caravan from Karbala to Syria (al-Sham), lost control of herself, and beat her head on howdah, as a result of which blood ran from her head. Many scholars believe that the story is not well-documented. According to Shaykh 'Abbas al-Qummi in his Muntaha al-amal, the source of the story is Nur al-'Ayn and al-Muntakhab, both of which are not reliable enough. The story does not appear in other reliable sources or early books of maqtal. Moreover, the story of Zaynab's (a) beating her head on the howdah is also rationally implausible.

On the contrary, others believe that tatbir has no Islamic origin. Murtada Mutahhari believes that "Tatbir and carrying drums and horns came to Iran from Orthodox people in Caucasia, and since people were ready to accept them, they quickly spread all over the place." Ali Shari'ati believes that tatbir and other similar practices come from ceremonies of the passions of the Christ, held by Orthodox Christians on anniversaries of the "murder" of Jesus (a). However, others believe that tatbir was common among Iraqi Turks, Sufi sects (including Qizilbash), and Kurds in Western Iran, and it spread to Iraq through Turkish pilgrims.

Backgrounds of Tatbir in Iran 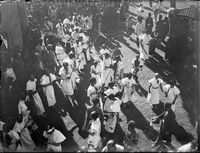 Tatbir in Tehran in the Qajar era

Tatbir in Iran dates back to the Safavid period. In some books of travel by Europeans of the time, tatbir and beating with blades are referred to, including in a report by Adam Olearius about a ritual of beating with blades on the Day of Ashura in Ardabil in the period of Shah Safi. The practice became widespread in the Qajar period, especially during the period of Nasir al-Din Shah. 'Abd Allah Mustawfi believe that the cause of the propagation of this practice was Mulla Aqa Darbandi, a scholar of the period of Nasir al-Din Shah Qajar.

There are reports of tatbir rituals in books of travel by tourists and other foreign visitors to Iran at the time who witnessed Muharram mourning ceremonies; for example, Dr. Feuvrier, Nasir al-Din Shah's physician, Henry Rene D'Allemagne, and Benjamin the great ambassador of the USA in the period of Nasir al-Din Shah.

In the period of Reza Shah, tatbir, as well as other mourning rituals, were banned since 1354/1935-6. The ban continued until 1320 sh/1941-2 when Reza Shah was removed from power. After that, its ban was lifted, and tatbir was resumed in some areas of Iran. In the period of Pahlavi, tatbir flourished and declined at different times. In some years (including 1343 sh/1964-5), it was banned at the command of Shahrbani (police) or SAVAK, and in some years, it was freely practiced.

Tatbir has been a contentious jurisprudential issue among Shiite jurists from the period of Qajar until today. Jurists can be divided into proponents and opponents of tatbir: jurists such as Mirza Na'ini, Muhammad Taqi Bahjat, and Mirza Jawad Tabrizi permitted tatbir, while jurists such as Sayyid Abu l-Hasan al-Isfahani, al-Sayyid Muhsin al-Amin, Sayyid 'Ali Khamenei, Husayn'ali Muntaziri, and Nasir Makarim Shirazi believed that tatbir undermines Shiism, and is therefore forbidden.

The main evidence appealed to by proponents of tatbir is, in addition to the celebration of rituals and the protection of Shiite traditions and the display of power by the Shiite community, a fatwa by Mirza Na'ini. In the second section of a well-known fatwa he wrote on Rabi' I 5, 1345/September 13, 1926, he writes:

The strongest view is the permissibility of making one’s forehead bleed with a strike of a dagger if one is protected from any harm. That is, the running of the blood without damage to the forehead’s bone which is usually harmless, as those who use daggers manipulate it in a way that does not damage the bone, and if one thinks that the strike of a qama is not usually harmful. Still, after the strike, an amount of blood that comes out is harmful, then it will be implausible to forbid it, just as a person who performs wudu' or ghusl with water or fasts in the Ramadan month, and then it turns out that this was harmful. However, the cautious thing to do for those who do not know how to manipulate daggers is to refrain from doing so, particularly young people whose hearts are filled with the love of Husayn b. 'Ali and are incontinent in the love of Husayn such that they do not care if harm might strike them during the use [of qama].

The following marja's or Shiite authorities have ruled that tatbir is permissible or even recommended:

The use of daggers and chains and drums and horns and whatever is common today in mourning processions on the Day of Ashura is forbidden and against the sharia.

After this fatwa, the most important text in opposition to tatbir was the book, al-Tanzih li-a'mal al-shabih by Sayyid Muhsin al-Amin, in which tatbir and other similar practices of mourning are considered as illegitimate, irrational, and a ground for undermining Shiism. The book's publication led to different reactions, and books and essays were written and published in its defense of or against it.

In answer to a question concerning the permissibility or impermissibility of tatbir, Imam Khomeini said that it depends on whether it is harmful and on circumstances of the time, and because of present circumstances, he said that it was forbidden. Ayatollah Khamenei, the Supreme Leader of the Islamic Republic of Iran, said about tatbir in 1373 sh/1994-5: "tatbir is an illegitimate, fabricated, and wrong practice which has, unfortunately, been propagated by some people in the last few years. Tatbir is a religious or a mourning practice, and it is certainly illegitimate and heresy, and there is no doubt that God is not happy with it, and I am not happy in my heart with those who publicly practice tatbir." Some scholars confirmed the words of the Supreme Leader of the Islamic Republic of Iran and believed that tatbir undermines Shiism and is therefore illegitimate.

Other marja's have also forbidden tatbir in their fatwas, including:

The main reasons for the forbiddance of tatbir in the views of its opponents include the following: