From wikishia
(Redirected from Fast)

Fasting is considered as one of the pillars of Islam. It is obligatory for every mature, rational, and healthy Muslim. The verse on fasting was revealed in Sha'ban 28, 2/February 24, 624: "O you who have faith! Prescribed for you is fasting as it was prescribed for those who were before you, so that you may be Godwary."[1]. However, some of its details on the conditions of fasting were changed and some were abrogated.

Fasting became obligatory for Muslims on Sha'ban 28, 2/February 24, 624, thirteen days after the change of the qibla.[6]

Fasting is mentioned fourteen times in Qur'an. The commands on fasting are stated in Qur'an 2 verses 183 to 185[8] and 187[9]. In addition, fasting is regarded as a replacement for practices of hajj or compensation of committed sins. As stated in Qur'an 33:35, the men and the women who fast will be forgiven by God[10]. Also in Qur'an 19:26, lady Mary (a) made a promise not to speak for a period of time, which is called fasting in the Qur'an.[11]

In books of Irfan (mysticism), three levels of fasting are mentioned:

The Qur'an, hadiths, and scholars, have mentioned various reasons for fasting. When the Qur'an states the ruling of fasting, it mentions piety as one of its reasons: "O you who have faith! Prescribed for you is fasting as it was prescribed for those who were before you, so that you may be Godwary." (Qur'an 2:183) 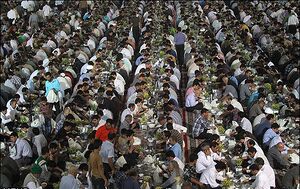 Iftar in the Holy Shrine of Imam al-Rida (a).
Main article: iftar